Based upon public domain text of the Streetcar Strike poster from The Missing Plaque Project...

Toronto Street Railway Company and the Knights of Labour 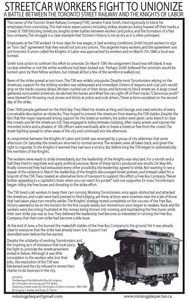 Streetcar Strike poster from The Missing Plaque Project. The owner of the Toronto Street Railway Company (TSR), Senator Frank Smith, tried vigorously to block his employees from unionizing. This had many repercussions including strikes, streetcars being heaved off their tracks, a crowd of 7,000 blocking streetcars, lengthy street battles between workers and police, and the formation of a free bus company. This struggle is a clear example that Toronto’s history is not as dry as it is often portrayed.

Employees at the TSR worked 14-hour days for low wages, in bad working conditions. Smith forced workers to sign an “iron clad” agreement that they would not join any unions. This angered many workers, and the agreement was not honored. A union called the Knights of Labour was approached by workers and on March 7th 1886, a local was formed.

Smith took action to confront this effort to unionize. On March 10th the assignment board was left blank. It was unclear whether or not the entire workforce had been locked out. Perhaps Smith believed the unionists would be turned upon by their fellow workers, but instead all but a few of the workforce walked out.

News of the strike spread across town. The TSR was widely unpopular. Despite most Torontonians relying on the streetcars, support for the striking workers was widespread and immediate. Drivers of wagons and coal carts would stop on the tracks causing delays. Workers rushed out of their shops and factories to block streetcars. A large crowd gathered, surrounded streetcars, de-latched the horses and lifted the cars right off of their tracks. “Clamorous youth” were blamed for throwing mud, stones and bricks at police and scab drivers. These actions escalated on the second day of the strike.

Over 7,000 people gathered on the third day. They filled the streets at King and George , and used vehicles of every conceivable description as obstacles. They hoped to prevent the streetcars from leaving the TSR stables. Despite the fact that the mayor expressed strong support for the streetcar workers, the police were given carte blanch to clear the crowds and let the streetcars roll. They engaged in indiscriminate clubbing. After many arrests and injuries the mounted police and a phalanx of 100 officers were eventually able to break a streetcar free from the crowd. The street fighting spread to other areas of the city and continued into the afternoon.

A compromise between the Knights of Labour and Smith was arranged by a group of city alderman that same afternoon. On Saturday the streetcars returned to normal service. The workers were all taken back, and given the right to organize. To the Knights it seemed they had won a victory. But before long the TSR began to systematically fire members of the Knights.

The workers were ready to strike immediately, but the leadership of the Knights was reluctant. For a month and a half they tried to negotiate and apply political pressure. None of these tactics produced any results. On May 8th, finally convinced they had exhausted every other possibility, the leadership agreed to strike. Not wanting to see a repeat of the violence in March the leadership of the Knights discouraged street protests and instead called for a boycott of the TSR. They created an alternative form of transport to support this effort, a ['Free Bus Company"]. “Never bother appealing to a capitalist’s brain when you can reach his pocket” said one supporter. En mass Torontonians began riding the free buses and donating to the strike effort.

The TSR hired scab workers to keep their cars running. Working Torontonians once again obstructed and attacked the streetcars, and scabs were hard pressed to find lodging, yet these actions were nowhere near the scale of those that had taken place two months earlier. The Knights’ strategy rested completely on the success of the Free Bus. Victory seemed to be on the horizon for the first couple weeks, but momentum soon began to weaken. Rank and file workers were becoming frustrated at the money being thrown into running and maintaining the free buses while their own strike pay was so low. They believed the leadership had become so interested in running the Free Bus Company, that their own strike had become a side issue.

At the end of June, a fire burned the makeshift stables of the Free Bus Company to the ground. Yet it was already clear to everyone that the strike had already been lost. Support had dwindled even before the fire started.

Despite the solidarity of working Torontonians and the inspiring acts of resistance that took place, the fight to unionize the streetcar workers ended in failure. Although it was little consolation to the workers who lost their jobs, the reputation of the TSR was blackened and the city refused to renew their charter to do business in the city.