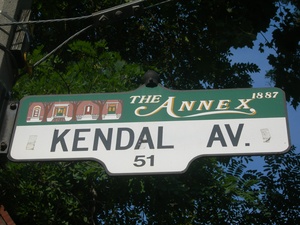 The Annex (1887) neighbourhood street sign at the corner of Kendal Avenue and Bernard Avenue.

The Annex is Toronto's most livable neighbourhood, so says the tagline of The Annex Gleaner community newspaper, so it must be true.

Annex residents include many well known artists. Many University of Toronto students and faculty live here as the campus is within walking distance. A lot of people say they live in the Annex but they actually live next door to the Annex. They say that because the Annex is the centre of the universe and they want to be cool like us.http://www.adifferentbooklist.com/

Catch a film at The Bloor Cinema.

Window shopping and people watching along Bloor Street between Bathurst and Spadina.

Browse the many bookstores along Bloor including Seeker's books, the BMV, Book City or local bookstores like A Different Booklist.

Pubs and Clubs: The Brunswick House or the "Bruny" is a favourite place for undergraduate U of T students to get drunk. The Madison would be another pub catering to the undergraduate crowd. Pauper's Pub another big pub, this one with a slightly more subdued crowd. Smaller pubs inlcude the Tap and for the locals Amnesia is the place to be.

SUSHI!!! there are about 8 sushi restaurants on Bloor St. between Spadina and Bathurst. The ones with the longest line ups are: Sushi on Bloor and New Generation.

Falafel!!! Gazale's is a tiny store right next to the Bloor Cinema that casts the most delicious smells on to the sidewalk. Excellent for the late night munchies. Try Sarah's or Leila's for eating in.

Feeling for some Caribbean food?!!! One Love is to die for!!!!! A little pricey but the quality of that Caribbean vegetarian goodness is worth it! Make sure to check out their BBQ tofu or pumpkin roti. There's also Roti Palace, kind of feels like you're back in Trinidad when in this restaurant. The prices are good and the food is delish! Finally, don't forget about Jerk King for some late night, post-drinking, early morning or midday jerk chicken life!

Everyone eventually ends up at Futures the universal default meet-up spot in The Annex. Inside the service is cafeteria style, while out on the patio the service is slow, which makes this place a great spot for socializing while attempting to do school work. They have excellent dessert at Futures.

For groceries try the Bloor Superfresh open 24 hours 7 days a week (including holidays.. honestly this place never closes) or the little fruit stand next to Shoppers Drug Mart. You can also go corporate and shop at the 24 hour Dominion (not open during holidays).

There is also COBS Bread Bakery. They are found on Bloor St. Their bread is really good.

The City of Toronto was growing and "annexed" a big piece of land north of Bloor St. That's why they call it The Annex.

If you have to ask how much, you probably can't afford to live here. But everyone tries anyway. Some people never learn...

A number of mansions were knocked down against local opposition, and apartment towers went up in their place. Architect Uno Prii using simple concrete in unexpected fashion, fashioned the exteriors of the newer apartment buildings into strange and unusual facades. This seemed to make people forget about protesting.