Following is public domain text from The Missing Plaque Project's The Ward poster... 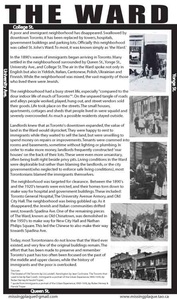 Poster of The Ward as part of The Missing Plaque Project. A poor and immigrant neighbourhood has disappeared. Swallowed by downtown Toronto, it has been replaced by towers, hospitals, government buildings and parking lots. Officially this neighbourhood was called St. John's Ward. To most, it was known simply as ‘The Ward.’

In the 1890’s waves of immigrants began arriving in Toronto. Many settled in the neighbourhood surrounded by Queen Street, Yonge Street, University Avenue, and College Street. The air in the Ward spoke not only in English but also in Yiddish, Italian, Cantonese, Polish, Ukrainian and Finnish. While the neighbourhood was mixed, the vast majority of those who lived there were Jewish.

The neighbourhood had a busy street life, especially “compared to the dour indoor life of much of Toronto”*. On the unpaved tangle of roads and alleys people worked, played, hung out, and street vendors sold their goods. Life took place on the streets. The small houses, apartments, cottages and sheds that people lived in were squalid and severely overcrowded. As much a possible residents stayed outside.

Landlords knew that as Toronto’s downtown expanded, the value of land in the Ward would skyrocket. They were happy to rent to immigrants while they waited to sell the land, but were unwilling to spend money on repairs or improvements. Tenants were crammed into rooms and basements, sometime without lighting or plumbing. In order to make more money, landlords frequently constructed ‘rear houses’ on the back of their lots. These were even more unsanitary, often being built right beside privy pits. Living conditions in the Ward were deplorable but rather than blaming the landlords, or the city government (who neglected to enforce safe living conditions), most Torontonians blamed the immigrants themselves.

The neighbourhood was targeted for clearance. Between the 1890’s and the 1920’s tenants were evicted, and their homes torn down to make way for hospital and government buildings. These included: Toronto General Hospital, The University Avenue Armory, and Old City Hall. The neighbourhood was being gobbled up. As it disappeared, the Jewish and Italian communities drifted west, towards Spadina Avenue. One of the remaining pieces of The Ward, known as Old Chinatown, was demolished in the 1950’s to make way for New City Hall and Nathan Phillips Square. This led the Chinese to also make their way towards Spadina Avenue.

Today, most Torontonians do not know that the Ward ever existed, and very few of the original buildings remain. The effort that has been made to preserve and remember Toronto’s past has too often been focused on the past of the middle and upper classes, while the history of immigrants and the poor is overlooked.