Based upon public domain text of The Wonscotonach River poster from The Missing Plaque Project...

THE WONSCOTONACH RIVER IS ALSO THE DON RIVER 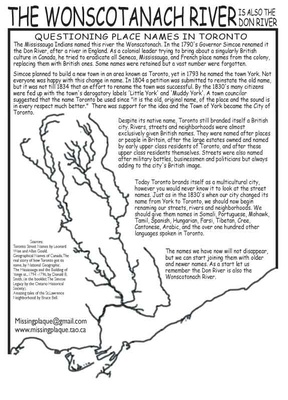 The Wonscontonach River is also The Don River poster from The Missing Plaque Project. QUESTIONING PLACE NAMES IN TORONTO

The Mississauga Indians named this river the Wonscotonach. In the 1790’s Governor Simcoe renamed it the Don River, after a river in England. As a colonial leader trying to bring about a singularly British culture, in Canada, he tried to eradicate all Seneca, Mississauga, and French place names from the colony, replacing them with British ones. Some names were retained but a vast number were forgotten.

Simcoe planned to build a new town in an area known as Toronto, yet in 1793 he named the town York. Not everyone was happy with this change in name. In 1804 a petition was submitted to reinstate the old name, but it was not till 1834 that an effort to rename the town was successful. By the 1830’s many citizens were fed up with the town’s derogatory labels ‘Little York’ and ‘Muddy York’. A town councillor suggested that the name Toronto be used since “it is the old, original name, of the place and the sound is in every respect much better.” There was support for the idea and the Town of York became the City of Toronto.

Despite its native name, Toronto still branded itself a British city. Rivers, streets and neighbourhoods were almost exclusively given British names. They were named after places or people in Britain, after the large estates owned and named by early upper class residents of Toronto, and after these upper class residents themselves. Streets were also named after military battles, businessmen and politician, but always adding to the city’s British image.

Today Toronto brands itself as a multicultural city, however you would never know it to look at the street names. Just as in the 1830’s when our city changed its name from York to Toronto, we should now begin renaming our streets, rivers and neighbourhoods. We should give them names in Somali, Portuguese, Mohawk, Tamil, Spanish, Hungarian, Farsi, Tibetan, Cree, Cantonese, Arabic, and the over one hundred other languages spoken in Toronto.

The names we have now will not disappear, but we can start joining them with older and newer names. As a start let us remember the Don River is also The Wonscotonach River.