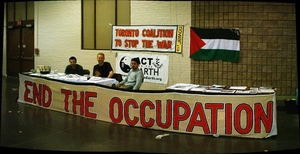 The Toronto Coalition to Stop the War (TCSW) is the largest peace organization in the Greater Toronto Area, representing over 60 labour, student, faith and community groups. As a member of the Canadian Peace Alliance, we work with other peace organizations across the country to build a strong, coordinated voice for peace and justice.

Our mandate is simple. We oppose war and occupation in Iraq and Afghanistan. We oppose Islamophobia, anti-Arab bigotry and all forms of racism. And we support civil liberties and defend freedom of expression and assembly.

Since 2002, TCSW has organized mass demonstrations against the wars in Iraq and Afghanistan, mobilizing hundreds of thousands of people. On February 15, 2003, we organized one rally and march of over 80,000 people. The coordination of anti-war events like these forced the Canadian government to stay out of the war in Iraq.

Since then, TCSW has continued to organize opposition to the occupations in Iraq and Afghanistan, and to support the campaign for US war resisters seeking refuge in Canada. TCSW has also organized large-scale educational events, including teach-ins and conferences, public forums and debates, and speaking tours featuring British MP George Galloway and US peace activist Cindy Sheehan.

In addition, we have organized city-wide marches involving tens of thousands of people, and emergency rallies and pickets in response to events such as the siege of Fallujah, the Abu Ghraib scandal, and the disappearance of Afghan detainees.

A clear majority of Canadians want the troops to come home from Afghanistan now, and oppose any extension of the mission. Yet Prime Minister Stephen Harper wants to extend it beyond 2009. Already more than 100 Canadians have been killed in Afghanistan, and thousands of Afghan civilians.

We want a world based on peace and justice, not war and occupation. Join us! 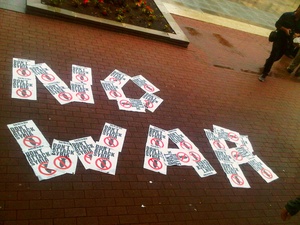 With the drums of War beating for a possible attack on Syria, TCSW has be re-activated, and in co-ordination with the Canadian Peace Alliance, has organized rallies in late Summer 2013:

Current Members of Toronto Coalition to Stop The War