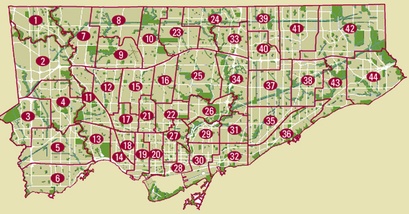 Toronto has 44 City Council Wards, as numbered above, named below. 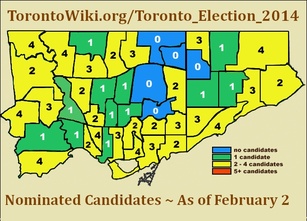 Nominations for Mayor, City Councillor, and Public and Catholic School Board Trustees opened on January 2 2014.

Sitting City Councillor Doug Ford has repeatedly confirmed he is NOT running for City Council again and aims to run for a Provincial Seat. If that remains true, then this Ward is an OPEN Seat without an incumbent running.

This Ward is expected to remain an OPEN Seat because Interim City Councillor Peter Leon promised NOT to use his incumbency as an advantage in the general municipal election. Recently, he's suggested he might run anyway.

Current City Councillor Karen Stintz has declared her candidacy for Mayor, hence if she does in fact run, this ward will become an OPEN Seat.

There is a slight chance, current City Councillor Mike Layton might, just might run for a Federal Seat, if his step-mom, Olivia Chow vacates her Federal seat of Trinity-Spadina and runs for Mayor. Who knows, still early.