Based upon public domain text of the Women's Shoe Strike poster from The Missing Plaque Project... 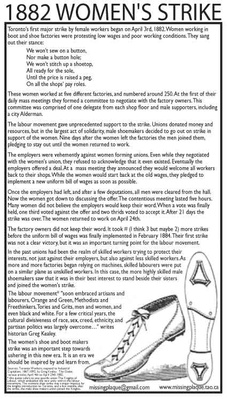 They sang out their stance:

We won’t sew on a button,

Nor make a button hole;

We won’t stitch up a shoetop,

All ready for the sole,

Until the price is raised a peg,

On all the shops’ pay roles.

These women worked at five different factories, and numbered around 250. At the first of their daily mass meetings they formed a committee to negotiate with the factory owners. This committee was comprised of one delegate from each shop floor and male supporters, including a city Alderman.

The labour movement gave unprecedented support to the strike. Unions donated money and resources, but in the largest act of solidarity, male shoemakers decided to go out on strike in support of the women. Nine days after the women left the factories the men joined them, pledging to stay out until the women returned to work.

The employers were vehemently against women forming unions. Even while they negotiated with the women’s union, they refused to acknowledge that it even existed. Eventually the employers offered a deal. At a mass meeting they announced they would welcome all workers back to their shops. While the women would start back at the old wages, they pledged to implement a new uniform bill of wages as soon as possible.

Once the employers had left, and after a few deputations, all men were cleared from the hall. Now the women got down to discussing the offer. The contentious meeting lasted five hours. Many women did not believe the employers would keep their word. When a vote was finally held, one third voted against the offer and two thirds voted to accept it. After 21 days the strike was over. The women returned to work on April 24th.

The factory owners did not keep their word. It took a number (perhaps 3 but maybe 2) more strikes before the uniform bill of wages was finally implemented in February 1884. Their first strike was not a clear victory, but it was an important turning point for the labour movement.

In the past unions had been the realm of skilled workers trying to protect their interests, not just against their employers, but also against less skilled workers. As more and more factories began relying on machines, skilled labourers were put on a similar plane as unskilled workers. In this case, the more highly skilled male shoemakers saw that it was in their best interest to stand beside their sisters and joined the women’s strike.

The labour movement “soon embraced artisans and labourers, Orange and Green, Methodists and Freethinkers, Tories and Grits, men and women, and even black and white. For a few critical years, the cultural divisiveness of race, sex, creed, ethnicity, and partisan politics was largely overcome…” writes historian Greg Kealey.

The women’s shoe and boot makers strike was an important step towards ushering in this new era. It is an era we should be inspired by and learn from.