The Arizona Historical Society Downtown History Museum is built into the Wells Fargo building. It has a separate entrance to the Wells Fargo Bank, but is connected to the bank by a side door. The front door of the museum opens into a small lobby area, where the museum attendant sits at a desk. The majority of the museum is organized in a circular shape, with a winding path that leads through each display back to the main lobby. To the left of the entrance is the small gift shop. Next to the gift shop is a small area describing early Tucson pharmacies and how they operated . To the right of the desk in a recreation of Romero's barber shop, including a barbershop chair and mirrors. To the left of that is a recreation of a hotel front desk. Across from this is a description of business in Tucson over time, with a display of the type of clothing sold in early Tucson. To right of this is a wall that makes up the core of the John Dillinger exhibit, with photos and information about his crimes and his capture in Tucson. Further down the wall are artifacts from the earliest civilizations in theTucson area. Following this is a display about Tucson public servants, such as police and firefighters. The is a display about the impact of the civil war on life in Tucson. In a small space across from this is a history of the first public library in Tucson, which is now a children's museum. Down the hall to the left is information about education and transportation, including cars and planes. There is a small display about religious institutions in Tucson, and across from this is an alcove, with information about Tucson newspapers. Further down the hall are displays about a number of Tucson topics, including music, movies, sports and ending with a map of the city's neighborhoods. This leads to a small room for alternating exhibits, that connects to both the main lobby room and the Wells Fargo Bank.

There are two primary exhibits currently on display in the Downtown History Museum, and one small exhibit that alternates:

1. HISTORY OF TUCSON STARTING WITH THE SPANISH PRESIDIO GROWING INTO A MODERN DESERT CITY

This exhibit provides a look into the history of the downtown area. It includes materials from a number of historical sites from Downtown Tucson, such as a chair from the old Romero barber shop, formally located at 164 W. Broadway Blvd. This barbershop served as a community hub in Tucson, and served many local and famous clientele. There is the tin eagle from the Eagle Flour Mill, a large building that used to stand prominently in Tucson. Also presented are a collection of old drug store materials and advertisements from a variety of local drug stores. A description outlines how early drug stores operated, and how they played a vital role in people's lives in Tucson. There is a section about mail delivery planes, including an exhibit about one of the first female pilots in the US, who completed the first air born mail delivery to Tucson. On display is a small model of the town on loan to the museum. There are a variety of pictures showing downtown Tucson at various times during the last century and a half. These pictures relate to a wide variety of topics relating to life in Tucson, including local newspapers, local businesses, , libraries, schools, sports, and other parts of downtown Tucson's identity. There is a small area to watch historical videos near the end of this exhibit. 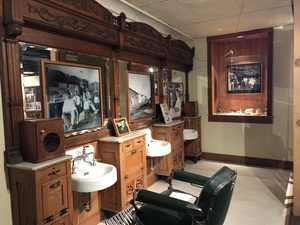 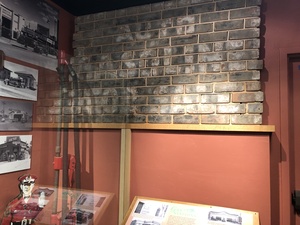 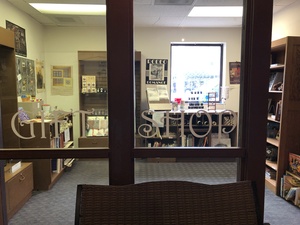 This exhibit focused on one of the most notorious Depression-era criminals, who was captured in Tucson in 1934. John Dillinger was a bank robber who ran a gang of criminals known as the "Dillinger Gang." He was arrested in Tucson on January 25th, 1934. The exhibit features pictures of Dillinger, the various members of his gang, and photos of the hotel where he was captured. Hotel Congress, the prominent Tucson hotel where Dillinger was staying, caught fire. Firefighters recognized him after they rescued him from the flames, and authorities captured him soon after. He was convicted of several bank robberies and charged with the murder of and Indiana police officer. He eventually escaped confinement and continued to commit crimes. He was killed in July of 1934. 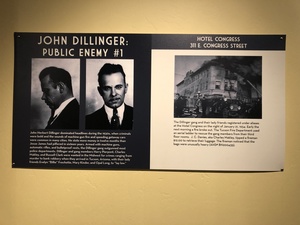 This exhibits highlights moments is Tucson's history which were influential in both positive and negative ways. 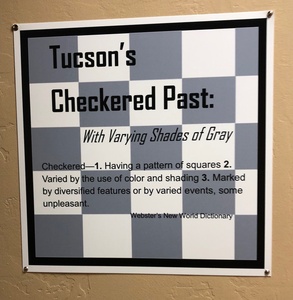 Title of the Exhibit

The gift shop in the AHS Downtown History Museum sells bookmarks, historical books, posters of old Tucson and other topics, and some art from local artists.

This is the Arizona Historical Society website about the Downtown History Museum:

This video by the curator aid of the AHS Downtown History Museum describes the museum and some of its exhibits: