Built in 1925 and opened in 1926, Bear Down Gym is one of the longest standing buildings on the University of Arizona campus in Tucson, Arizona. Bear Down Gym is located near the epicenter of Arizona’s campus and it resides on the campus mall next to the University of Arizona Main Library. This makes it one of the biggest attractions at the University of Arizona. The gym itself was originally known as the Men’s Gymnasium, but is now known as a multi-purpose “arena” that replaced the old gymnasium, Herring Hall. The original architect of the building was Roy Place, who designed the building as a Classic Revival on a budget of $130,000. The gym was built by Clinton Campbell with the help of Roy Place within one year. Bear Down Gym was listed on the United States National Register of Historic Places back in 1990, 64 years after it was built and is still recognized as one of the most historical sites on campus.

The main slogan, tradition, and battle cry of the University of Arizona is “Bear Down.” This battle cry dates all the way back to the mid 1920’s, right before the historic preservation, Bear Down Gym, was built. During the fall semester of the 1926-1927 school year, a multi-sport student athlete named John “Button” Salmon had been known as a “social icon” on campus. One day on an October afternoon, Salmon and teammates had been returning from a football match in Phoenix where they had been in a devastating car accident that left Salmon with a severed spinal cord which paralyzed him from the neck down. Throughout the week, his teammates and coach, J.F. “Pop” McKale had come to visit him on his deathbed. As Coach McKale had been leaving from his final hospital visit, Salmon had whispered to him, “Tell them… tell the team to bear down,” as a final message to his teammates. Being the figure that he was on the Arizona campus, those eight words have stuck with University of Arizona students for the last 90 years. Songs such as “Fight, Wildcats, Fight” and “Bear Down, Arizona” were created off the Salmon’s iconic saying. The day of 'Button' Salmon's funeral, all classes at the University of Arizona and all over Tucson were canceled. Employers and employees all over Tucson attended his funeral instead of work as well.  The saying and story of "Bear Down" is a huge part of becoming a Wildcat at the University of Arizona. So much that during campus tours, the tour guides bring the group to the Bear Down Gym and sing the "Bear Down, Arizona" song to the group. They also explain the background of the saying since many people are unaware of the meaning of the saying and should know the importance and significance of it.

When Bear Down Gym was originally built in 1926, the primary purpose of the arena was to be used as a gymnasium for athletics, such as men’s basketball and gymnastics. Being built around the time of World War II, the gym was eventually used as barracks for cadets who were attending the Naval Training School. The format of the arena was that the main level was used for the team’s basketball courts and gymnastics floor, and the lower level was filled with locker rooms and offices. The arena had an upper concourse that was used for seating, which held about 3,600 people. The Arizona Wildcats had used Bear Down Gym as an athletic facility until 1973, when the McKale Center, named after John “Button” Salmon’s coach, J.F. “Pop” McKale, was built. The McKale Center is know the current home of multiple Arizona Athletic teams such as men’s and women’s basketball, gymnastics, and volleyball. Now, the Bear Down Gym is mostly used as a space for the Think Tank which is a program for students to get help with their studies. All of the main offices are located inside of Bear Down Gym. They also offer workshops, tutoring, writing center, and test prep. Many students at the University of Arizona use these services provided in the Bear Down Gym. 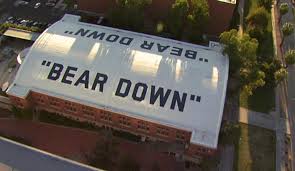 After the creation of the McKale Center, the University of Arizona still found that many good things could be put to use of Bear Down Gym. Recreated into office space, the school utilizes the building in many different aspects now. The Campus Recreation Center uses the basement floor of the building for activity classes, such as boxing, sparring, cycling, etc. The main floor is now used for things such as the Office of International Admissions, the College of Letters, Arts & Sciences Academic Advising Center, as well as the Think Tank which is now the main use of the building. 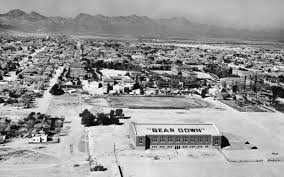 Bear Down Gymnasium isn’t only known for its usage as an arena, office space, and academic learning center. In 1984, the world-renowned movie Revenge of the Nerds had hit theatres. The film had taken set on the University of Arizona’s campus, known as Adams College within the movie. During the movie, freshmen were kicked out of their dorm and were forced to relocate. These freshmen were located to Bear Down Gym, where a specific scene shows that there is a curtain splitting the gymnasium where half of the gym was used for housing, and the other half was used for it’s original purpose, basketball courts. Another fun fact is, during World War II the Bear Down Gym and other facilities at the University of Arizona were taken over by the U.S. War Department as a place for 500 students to stay before they were shipped off to war. Some of these people gave their lives in the war and never returned. Now, there is suspicion that their ghosts still live in the Bear Down Gym because they are looking to start where they left off as students.

Another fun fact that Bear Down Gymnasium provides its tourists, workers, or students, is the history of the basement. The basement served as a shooting range for ROTC members for a very long time.

In 1942 and 1943, Bear Down Gym was used by the U.S Navy for cadet training... calling it the U.S.S. Bear Down. During these two years, The University of Arizona men's basketball team was playing and practicing at Tucson High School, just three blocks away from Bear Down Gym.

Another fun fact about the Bear Down Gym is for the first few weeks of every school year, it was used as a temporary living space for the students waiting to move into the dorms and sorority/ fraternity houses. 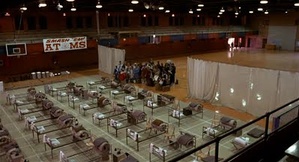 The University of Arizona’s Men’s Basketball Program had won 10 BIAA regular season Conference Championships while playing in Bear Down Gym.

Bear Down Gym is one of the most historic landmarks on the University of Arizona campus and has received minimal renovations over its 91-year existence. 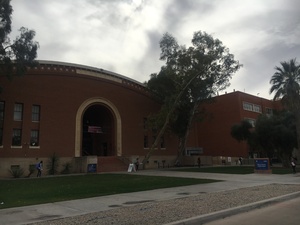 Bear Down Gymnasium is now used as the University of Arizona's primary Think Tank location. This is a location where you can find many programs and services such as supplemental instruction, private tutoring, test prep courses, etc. Think Tank's mission is, "To empower University of Arizona students by providing a positive environment where they can master the skills needed to become successful lifelong learners.". If you are interested in their services, you can find hours and information on their website listed below to book an appointment.

Bear Down Gymnasium has created an advising center now known as "The A Center". A student can schedule an appointment with any advisor to talk about the following courses: Pre- Health Professions, Pre- Law, and Internship advising. Drop in advising is also available but quick questions must be asked since the advisors have appointments to be met. The hours of operation are Monday through Friday from 8 a.m to 5 p.m. However, with the COVID- 19 pandemic that hit March 2020, The A Center is now closed and moved all of its appointments online via Zoom or phone calls. 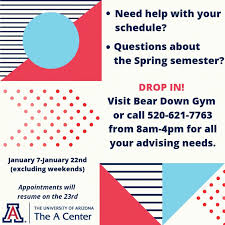