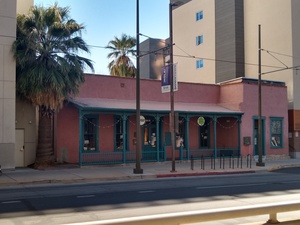 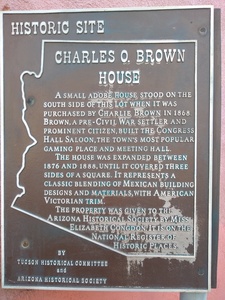 A portion of the 1862 map of downtown Tucson. The Brown House property is probably lots 130 and 131, located to the left of the plaza by Under the Floors: Archaeology inside the Brown House

Charles O. Brown and his partner J.A. Rosselle opened a saloon and gambling house on the corner of Meyer and Congress streets in Tucson in building around 1868. 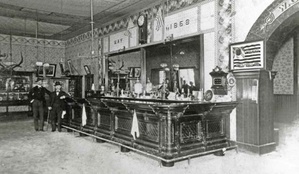 Congress Hall Saloon established 1868. The shorter gentleman is Charles O. Brown, the taller man is his son by The Scourge That Killed More Tucson Pioneers Than Apaches Did

The saloon became known as the Congress Hall Saloon because the Territorial Legislature had met there. The saloon (Farish, Thomas Edwin. History of Arizona. Phoenix, Ariz 1915) had floors of wood, the lumber for which was hauled from Santa Fe and cost $500 a thousand. The locks on the doors cost $12 each and all other material in like proportion. For a long time, it stood as the best building in southern Arizona. The evaluation price of the House was 17000, which was a very exquisite home in 1888. 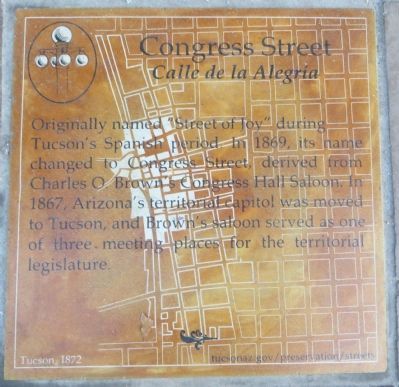 The Charles 0. Brown House is one of Tucson's oldest territorial houses. The house represents (A Guide to Tucson's Historic Neighborhoods, 2011) two distinct styles of adobe architecture prevalent in Tucson. The older part represents a territorial style closer to the Mexican origin. The latter building represents the American-Anglo version of the Mexican adobe with its ornamental wood trim, columns, and more window panels. 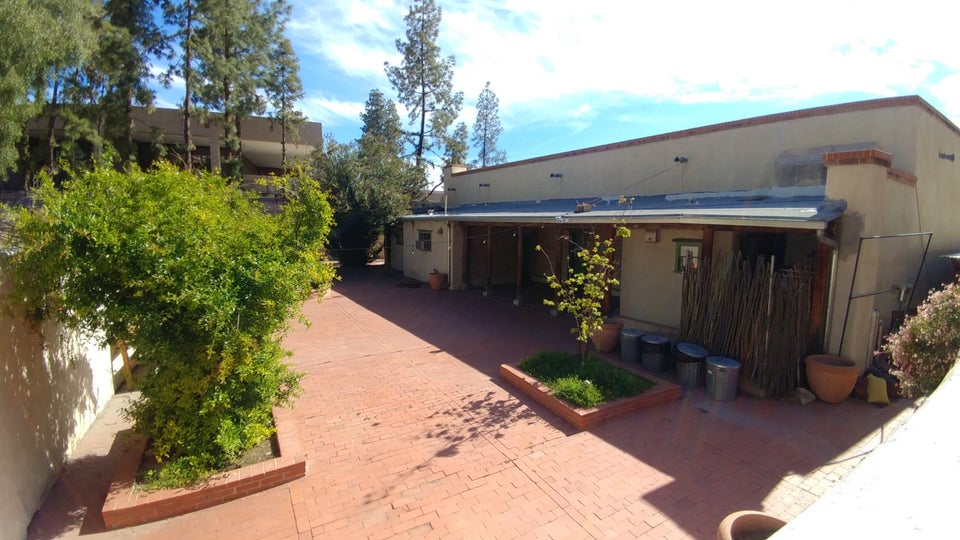 The Charles O. Brown house is a complete example of a hybrid house type. The sides of the House face Jackson Street to the south and Broadway Boulevard to the north. The southernmost section appeared in the 1840s and is a classic three-room adobe row house. The bearing walls of the Charles O. Brown house are made of unstabilized raw materials. That they can withstand more than a century demonstrates the durability of adobe when built. The walls are finished with lime-sand plaster. The floors were of compacted earth, then wood floors were laid on top of the sleepers, and later concrete was used to replace decayed and damaged wood. The rock and mortar foundation of the south central room Under the Floors: Archaeology inside the Brown House


Several rooms at Charles O. Brown House keep wood floors dating to the middle of the 19th century. Windows, doors, and frames are of wood. Some of the windows show ripples typical of 19th-century float glass. The solid wood-framed porch, what attached to the building, facing an open patio or courtyard. The east and north sides of the patio are defined by an "L" shaped house, forming a spacious central area. Principal rooms have very high ceilings (fourteen feet) and operable transom windows above connecting doors. The long leg of the "L" plan runs along the east and is one room in depth. This row of rooms has a continuous porch, partly open, partly fenced with adobe, and partly glazed with wood sash windows.

This House combines architectural ideas and spatial solutions. Earthen walls keep heat well. Attic spaces are well insulated to reduce heat loss and heat transfer through the roof. The south-facing porch shades the summer sun and also allows the lower winter sun to warm adjacent rooms. A glazed veranda warms the building in winter. In the yard, there is a place for a vegetable garden or a flower garden.

C.O Brown's home in Tucson, Arizona, is a complete example of a hybrid house. It is a classic mix of Mexican building structures and materials with American Victorian finishes. It resembles a typical Mexican-style adobe townhouse bordering the street. Brown yet, remodeled the house when he purchased it in 1868. This house, also of adobe, was made in style known as Anglo-territorial. In the north building, Anglo expectations are merging with Hispanic building practices. Wood pillars and braces showcase Victorian influences. The porch features Victorian elements such as lathe posts, decorative brackets, and rows of chiseled spindles under the cornice, indicating the period of the 1890s. Passing through a timber-framed porch, you enter a Hispanic zaguan, passing through the depths of the House into a glazed veranda, another Anglo idea. The interior features beaded paneling, another touch of the Victorian era. A hybrid Hispanic / Anglo home faces the street, with a private courtyard.

Leionne and Clifford opened the Arizona Studio in 1932. The Arizona Studio was located the Historic Charles O. Brown House (Old Adobe Patio), artist Gerry Peirce also had a studio in the building. Examples of Salter’s glass painting can be found on original surviving windows in that building. 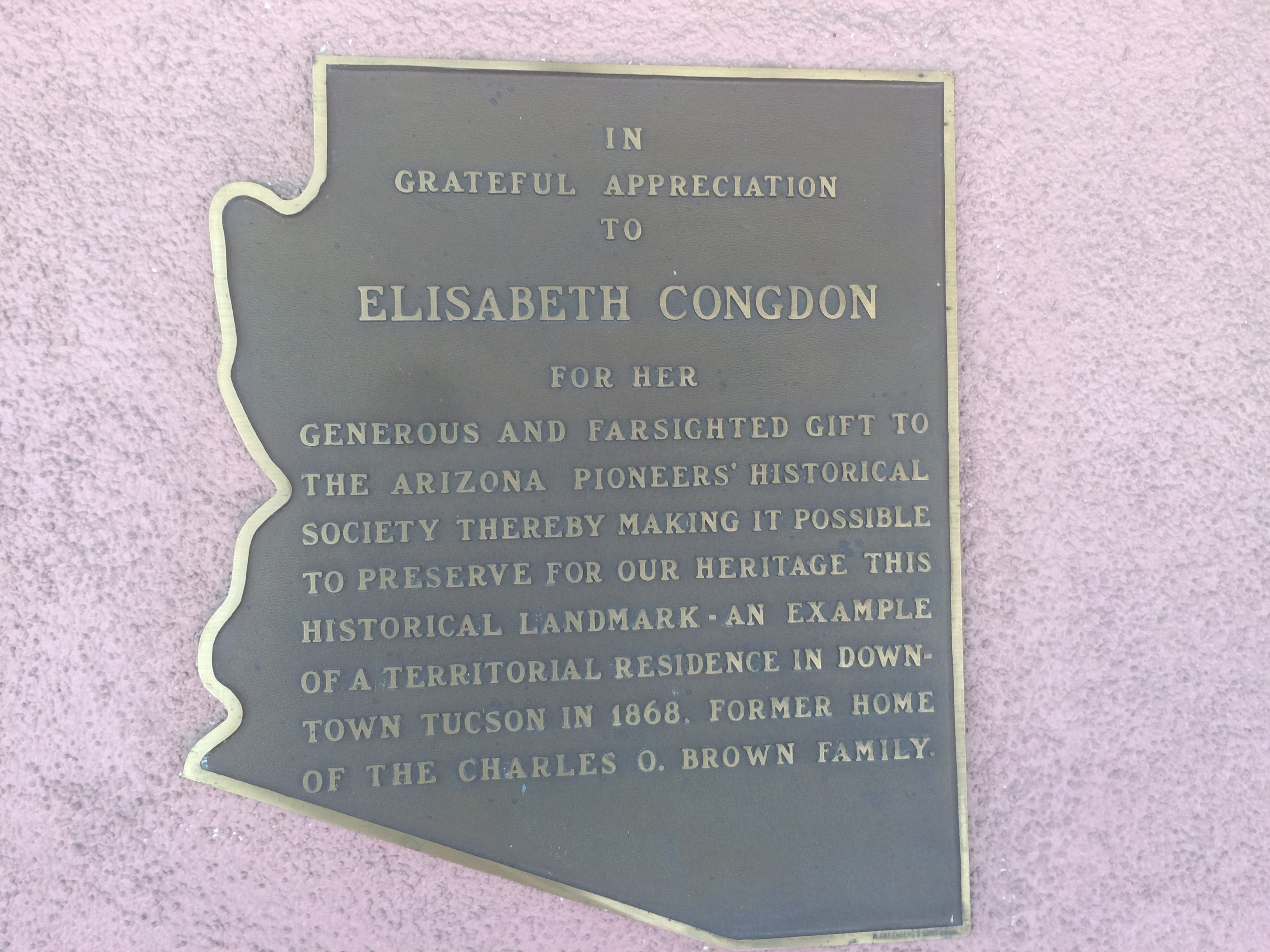 Additional marker on the Charles O. Brown House by The Historical Marker Database

The Charles O. Brown house with its picturesque porch and two-foot thick adobe walls is now owned by the Arizona Historical Society and has been listed on the National Register of Historic Places since 1971.

Archaeological monitoring and excavation ( Technical Report No. 2013-02 Desert Archaeology, Inc.) at the Charles O. Brown House were conducted in 2011. The renovation project was undertaken by the non-profit Ben's Bells. Desert Archaeology, Inc. volunteered to undertake archaeological monitoring and data recovery as a cost-savings measure for this non-profit group. Removal of the wooden floors within the northwestern, southwestern, and south-central rooms revealed large amounts of perishable materials. Loose dirt was removed down to the original tamped dirt floor, uncovering many additional artifacts.

Artifacts found beneath the floor dated mostly to 1936 and 1937. 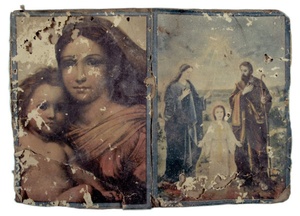 A religious print, with Maria and Jesus on the left and Maria, Jesus, and José on the right (photo by Rob Ciaccio) by Under the Floors: Archaeology inside the Brown House 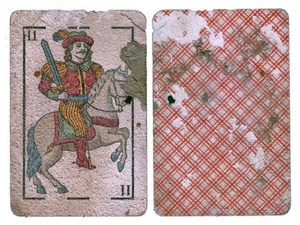 A horse card from a Spanish-style 40-card deck used to play malilla (photo by Rob Ciaccio) by Under the Floors: Archaeology inside the Brown House 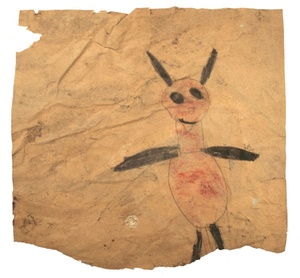 A child’s drawing (photo by Rob Ciaccio) by Under the Floors: Archaeology inside the Brown House 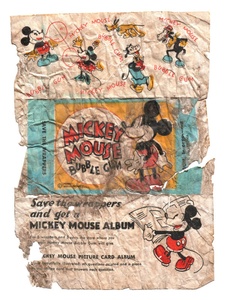 A Mickey Mouse Bubble Gum wrapper. Children were encouraged to collect wrappers they could trade in (with a nickel) for a Mickey Mouse picture album (photo by Rob Ciaccio) by Under the Floors: Archaeology inside the Brown House

Excavation revealed the original tamped dirt floor below. When the house was built, it almost certainly had a tamped dirt floor, which was replaced by a wooden floor, probably shortly after the railroad arrived in 1880. This allowed large quantities of milled lumber to be brought into the community. The six rooms appear to have been built around 1879, based on other tree-ring dates. At that time, the builders likely reused an earlier set of beams, perhaps from a previous structure on the property that was dismantled at that time.

There was much changing of hands of the property among the family, and the rooms were used for individual lodging for many years and, by 1937, shops moved in. 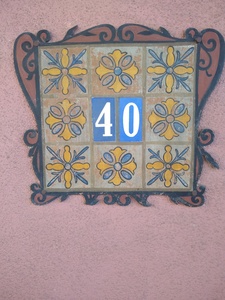 Number of the house photo by Nina Kotova, March 2021 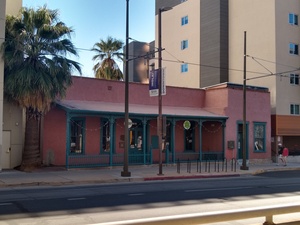 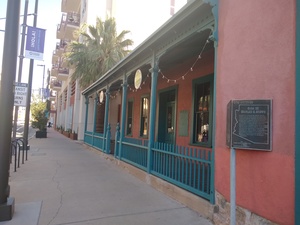 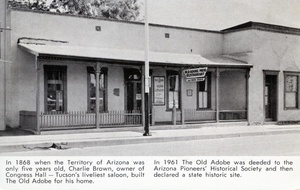