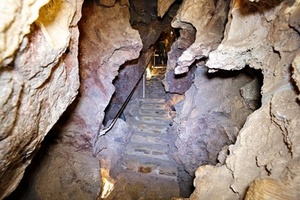 Photo from World of Caves[6]

Colossal Cave is a large cave system that is located near Vail, Arizona. Today the cave system can be visited as a part of the National Register of Historic Places. The address is 16721 E Old Spanish Trail, Vail, AZ 85641, USA. 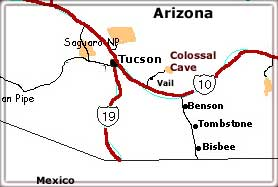 The cave is one of the largest dry caves in the United States. Being a dry cave system means that the formations, such as stalactites, stalagmites, columns, and draperies are no longer actively forming.[1] Even though the cave has been known about for over 100 hundred years it is still not fully explored. It is estimated that there are over 39 miles of tunnels inside the cave system. The 2 miles that are fully documented took 2 years to map and fully explore given the complexity of the cave system.[1] Colossal Cave Mountain Park is considered a great tourist destination, especially in the summer months as the temperature inside the cave system is typically around 70 degrees, even during the hottest parts of the summer. The cave also has a humidity of around 60%.[5] There are several tours around the cave that are guided and there are a variety of tour options, catering to both the casual tourist as well as the avid adventurer. The tours for the more adventurous people, include much more difficult terrain, but explore deeper areas of the cave that the Classic Tour does not cover.

As of April 2022, the pricing for tours are as follows (Rates via ColossalCave.com[6]):

If you enjoy other outdoor activities, you can also rent a camping area, or go on one of the various trail rides that are available.

Pricing for Tent Camping is as follows as of April 2022 (Rates via ColossalCave.com[6]):

Pricing for the Trail Rides are as follows as of April 2022 (Rates via ColossalCave.com[6]):

There are also other activities around the Colossal Cave area, including gem mining, a petting zoo, five miles of scenic trails, camping, and picnicking.[3] Though in the summer months if you choose to go hiking it is highly recommended to bring a lot of water, a hydration pack would be a good investment if you are planning to hike in the summer, as heat stroke can be deadly.

The cave was first created over a millennia ago. About 300 million years ago much of American Southwest was covered in water eventually the water began to recede throughout the years or eons of water erosion the cave dried out and became one of the largest dry caves of located in North America. Then in circa 900 AD a civilization lived and thrived in this region that is now known as the state of Arizona. They were the earliest inhabitants and were the Hohokam. They created a highly advanced and successful network of irrigation canals that stretched for more than 150 miles that was used for farming. Archeologists found evidence of the Hohokam using the cave as a temporary shelter. The cave was then “discovered” in 1879 by Solomon Lick who owned the area. While going around his property he discovered what he originally thought was a mine, that mine as it turns out was actually the cave system, we now call Colossal Cave. Though it was not always called Colossal Cave, when Lick first discovered it he named it “The Mountain Spring Cave” since it was discovered on Mountain Springs Ranch.[5]

Legend of the Lost Loot

While the cave today is known for being a great tourist spot, in the 1800’s it was known for being a hideout frequently used by bandits. In 1887, the cave system played a major role in a story now called the “Legend of the Lost Loot”. The story tells of three men who robbed the Southern Pacific train twice over four months.[5] They succeeded in stealing thousands of dollars, as well as gold and silver. It is rumored that the train robbers took upwards of $60,000, though Wells Fargo did not confirm how much money was stolen.[1] The train robbers would likely have gotten away, even though they had left a blood trail out of the cave. They were only found because they bragged about their accomplishments.[7] The bandits were then tracked by the Sheriff to one of the entrances of Colossal Cave. Once the Sheriff and the deputies found the bandits a shootout occurred, killing 2 of the train robbers. The lone survivor was sent to prison where he spent almost 2 decades. It is speculated that the train robbers hid the loot they stole somewhere in the cave before their deaths or capture. The survivor never revealed where the loot was hidden, which is how the legend got its name. Even today, people are still looking for the treasure hoping to stumble across it.[5] This story did not just spark a great legend to tell tour goers it also gave the cave a nickname, Robber’s Cave.[7]

Colossal Cave was also used for other purposes as well. In 1905, a 75-foot tunnel was mined out in order to harvest bat guano.[7] The bat guano was used as fertilizer.

Why Are There Pathways to the Cave?

The Great Depression actually contributed to the creation of the walkways that line the cave. In an effort to employ more people, the Civilian Conservation Corps hired people to create the walkways in the cave as well as the park roads around the area.[2] 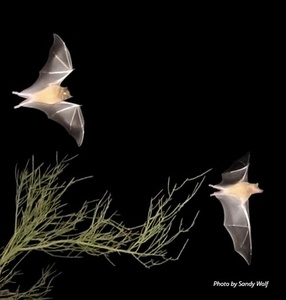 The area in and around Colossal Cave is home to many species of bats, 12 different species have been recorded to inhabit the Park, which is nearly half of the bat species found in the state of Arizona.[4] Some bat species use Colossal Cave as a permanent home while others use it as a temporary home during certain times of the year.[4] Some of the species you can find include the: 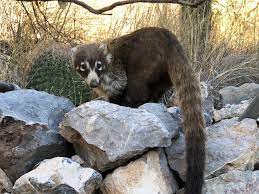 There is plenty of wildlife that can viewed when you visit Colossal Cave but one of the most notable animals that can be spotted is the coati. They are native to South America but can also be

found in Mexico, Central America, South America, and Southwestern United States. They have unusually long noses that can be used for searching for food and long tails which they have high up

in the air for balance. They have groups that can have up to 30 members.