One of the places that symbolizes the University of Arizona the most is the Jim Click Hall of Champions. Home to many historical achievements, the Hall of Champions offer fans, students, and alumni the chance to learn more about Arizona Athletics. Whether it be getting up close with trophy cases, readings, and displays featuring Wildcats memorabilia, there are numerous exhibits that cover decades of success. According to the University of Arizona website, this facility is 36,000 square feet, located in the Eddie Lynch Athletics Pavilion on 1766 E University Blvd, Tucson, AZ 85719.

Founded in 1885, the University of Arizona has always had a rich athletic history. From the early days of football player, John Button Salmon, telling the team to "Bear Down" in his absence (later becoming the school's really cry), to famous coaches like James "Pop" McKale and Dick Tomey, the Hall of Champions acts as a place to honor the athletes that have come through the university since the very beginning.  Each trophy in the Hall of Champions represents an achievement for the university, including old Bowl game wins and Pac-12 championship trophies from softball, baseball, and other sports as well. Those trophies represent the victories in the NCAA competitions and honors that athletes receive throughout the years. We continue to see trophies being added to this location each and every year. The University also bases itself a lot on tradition, which is shown based on the numerous uniform displays, showcasing how each one has influenced the next. What you may find interesting is that the actual colors of the University of Arizona weren’t originally navy blue and cardinal. In fact, the colors of the university were originally sage green and silver, “sage in reference to the indigenous sage bush and silver symbolizing the state’s mining industries.”1 Upon going through the exhibit, you can see evidence of how the colors have changed and how the become what they are today. 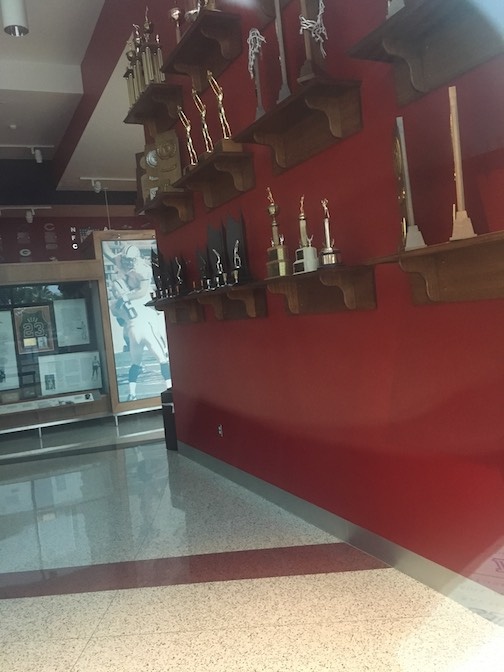 Some of the trophy cases displayed

The Hall of Champions also gives a stage to women’s athletics. This includes tributes to the 2020 Women's Basketball team lead by Aari McDonald and coach Adia Barnes, while also honoring legendary softball coach Mike Candrea since his retirement. There is an exhibit in a glass case where you can see the trophies that the women’s teams have won during their college and professional careers. There are a few trophies from their legendary softball teams, who have won multiple national championships. Besides trophies, there are pictures of the actual athletes that made history, including All-American Jennie Finch and home run leaders Katiyana Mauga and Jessie Harper.  The exhibits show when women’s sports were established, when they started to become more popular, and when they got implemented into the university. These exhibits offer great pride to women and especially to the women who were apart of it. 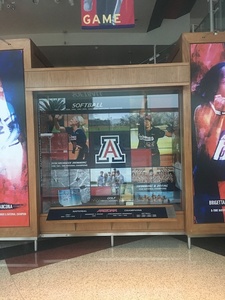 Moreover, one may find it fun and interesting that there are some displays that are interactive and can be explained by interacting with it.  For example, on the left corner, there is a place that one can click a button and people can hear the roar of a mountain lion which symbolizes the wildcat mascot. This can tell a story about the tradition and what it means to be a wildcat. Also, it can bring the audience into the wildcat atmosphere.

What one can find really interesting is that they highlight every sport and its own history in that place.  While you are walking around, in every corner you will find a different type of sport and its own achievements. There is a very unique collection of articles, jerseys, and in-game collectibles. Also featured, a wall of all of the Sports Illustrated covers that have featured a UA athlete on them, with one of the newest being Nick Foles' Cinderella run to the Super Bowl. In every collection of each sport, there is equipment that the athletes use to use from that time period.  Their shoes, their racket and most of this equipment never stayed the same. One thing to notice is how it changed over time. For example, how the basketball that they used was different from the current time period. Also, there is one exhibit about baseball and it shows how they use to have open shoes and their baseball bat use to be in a different size. The highest regarded sport though at the university is their Men's Basketball program, led by four Final-4 teams as well as the 1997 National Championship team led by Miles Simon and Mike Bibby. Recently, a statue to honor legendary basketball coach, Lute Olson, was erected, and a memorial was held after his passing in 2020 outside of the Hall. Some notable athletes that attended the University of Arizona are Nick Foles, Steve Kerr, Rob Gronkowski, Trevor Hoffman, and Aaron Gordon.

On one of the big walls, there is a wall that shows all the athletes that participated in the Olympics games over the years. There are a lot of athletes from different sports that have participated. For example a lot of runners from track and field and swimmers have competed and players have gone on to have decorated olympic careers, with recent Olympians Brigetta Barrett (Silver-Track and Field) and Delaney Schnell (Bronze- Swimming). 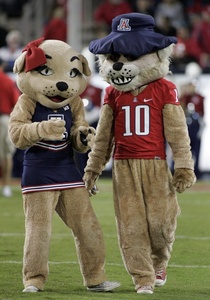 The Jim Click Hall of Champions is truly symbolic to Arizona Athletics. This is the space where all former athletes are welcome and celebrated at the University of Arizona. For a program that is built around tradition, legacy, and honoring the greats, the Hall of Champions is a collective that will forever bring memories and celebrations for Arizona Wildcats of all types.

The Hall of Champion is open to the public Monday through Friday from 8 am – 5 pm and on Saturday it is open from 9 am -1pm. It is open at the same day before basketball and football games. While it was closed during the Pandemic, the Hall of Champions is now open and ready to welcome guests. The space can also be rented for catering events, meetings, and other parties by going to ArizonaWildcats.com, and going through their reservation process.