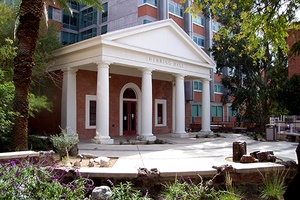 Herring Hall was built in 1903 and stands to be the second oldest building on the University of Arizona campus. [1]

Built in 1903 for only $6,675, most of which was donated by Copper Queen Mining Company. The building was named after lawyer, William Herring who had convinced Dr. James Douglas to contribute $5,000 for building costs. Herring Hall stands to be the second oldest building on the University of Arizona Campus. The building’s purpose changes several times throughout the years but was originally built and used as a Men’s Gymnasium from 1903 to 1925. [1]

The first floor designed to be an open gymnasium and the basement was used as a locker room with showers. A balcony was then added in 1906 to the first floor. In 1956, the building’s interior was largely renovated by the School of Journalism.  The Landscape and Architect Program then renovated the balcony into offices and modified the basement’s stair access and external stair access in the 1980s. [1]

Herring Hall is mainly made up of red brick.  Four Doric columns made of concrete, stand in front of the building and are painted white. An arch rests on top of the building’s front door, positioned between two windows. David Holmes (1874-1967) was the main architect of Herring Hall who worked at Territorial University (later named the University of Arizona) School of Mines.  Holmes was hired to design Herring Hall in order to save money by hiring an out of town architect. [1]

The College of Agriculture and Life Sciences graduate students are currently using the basement of Herring Hall and the remainder of the basement is used for storage. The College of Agriculture and Life Sciences recently rehabilitated the structure of the building to provide a new home for the Herbarium and the Campus Arboretum. The Herbarium is a scientific museum that houses preserved specimens of plants that are mounted on sheets of archival paper.  These collections are the basis of plant taxonomy and are used by ecologists, biogeographers, natural resource scientists, anthropologists, and pharmacologists. The Campus Arboretum showcases the historic, scientific, aesthetic, environmental, economical, conservation, and educational value of plants in the larger Tucson area and the American Southwest. [1]

The University of Arizona Herbarium, also known as (ARIZ) is a research collection with over 425,000 dried plant specimen. [2] There are two major collections; the vascular plant collection and the mycological collection. Established by James Toumey in 1890, the Vascular Plant Herbarium has one of the largest collections of plants from the southwestern United States and northwestern Mexico. Every year, there is an average of 2,300 people who visit the Herbarium. The Herbarium allows for there to be thousands of identifications of plants. [1]

Originally, what it was?:

The University of Arizona Campus Arboretum covers almost 400 acres of land to preserve and enhance the historic tree collection and to encourage sustainable campus development. Olive trees and date palms were being researched to see if they have potential in becoming cash crops. Meanwhile, in Arizona, one of the most popular desert species are cacti. Cacti were used to help people become encouraged to appreciate learning about the native desert. As time went on, there was more of an awareness of natural resources and growing urbanization which encouraged Dr.Warren Jones to improve landscape ornaments. [3]

The University of Arizona is the home to hundreds of plant species from every continent on Earth. This campus embodies some of the largest specimens, which are known as the Great Trees of Arizona. In September of 2002, the UA Campus Arboretum became a member of the American Public Garden Association. As a member, the UA Campus Arboretum is committing to preserving and enhancing the collection of the specimen on the University of Arizona's campus. It also says that they will promote stewardship and conserve urban trees. [3]

There are events that are hosted jointly by the Campus Arboretum and the Poetry Center. One of these events is called Reading Under the Trees. 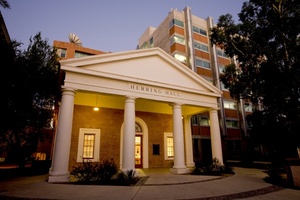 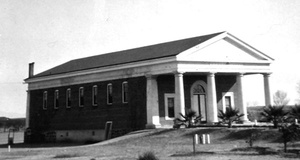 Herring Hall next to Old Main: 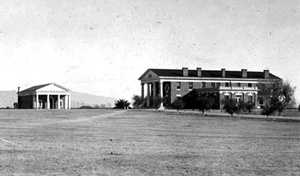