Hi Corbett field could not be in a more convenient, ideal location. Consider this: a baseball field known for bringing in large, boisterous crowds, beautiful sunsets, and high quality baseball competitions. Additionally, it’s all right in the middle of numerous activities such as Reid Park, Reid Park Zoo, two 18-hole golf courses and El Con Mall. Location. Location. Location. Right in the heart of all these activities, Hi Corbett ball park is the place to be in the spring. This is the home field and practice facility for The University of Arizona Wildcats Baseball Team. Springtime boasts beautiful weather in Tucson and the breathtaking sunsets are quite a site for fans of baseball. Baseball fans can enjoy a thrilling atmosphere within the 9500 seating capacity. The Arizona Wildcat team brings in an average attendance of 3000 to 5000+ to each home game. It is known for it's beautiful sunsets that fall just behind the huge Terry Francona hitting center that falls beyond the right field wall.  It was also the home of the famous move, "Major League."  This is known as one of the great sports movies and Tucson is the home for this great film. 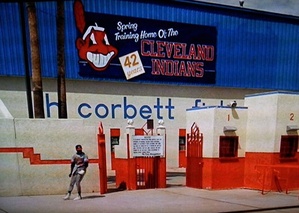 (Scene from Major League: Before Renovations)

The baseball field was originally built in the year 1927 and known as Randolph Municipal Baseball Park. It housed original Tucson-base teams, the Tucson Waddies, Tucson Lizards, and Tucson Cowboys. Interesting enough, the field was home to Cleveland Indians in 1946 for spring training thanks to the president of the Tucson Baseball Commission, Hiram Steven Corbett, for making the deal a reality. He was a huge baseball fan and wanted to bring professional baseball to the local community for fans of all ages to enjoy.  This led to the renaming of Randolph Municipal Baseball Park to Hi Corbett Field as the Indians beat the Giants in the Cactus League inaugural opener that same year with a an overall score of 3 to 1. The Indians practiced at the facility for 46 more years until the Colorado Rockies called their training ground from 1993 to 2010. Other affiliated teams to Hi Corbett were triple A team, Tucson Toros until they moved to the Kino Sports Complex, which was opened by the Arizona Diamondbacks and Chicago White Sox, and the Tucson team was renamed as the Tucson Sidewinders.  However, in 2011 the Colorado Rockies moved to Salt River Field in Scottsdale as the drive was too far and inconvenient for the other teams who are all located within the Phoenix area.

Although many memorable games have been played on Hi Corbett field as we know it the early days of Hi Corbett were initially for night games as day games and double headers were played on-campus, which is where the University of Arizona Main Library is now located. It was not until April of 1940 when the first collegiate night-game was played in the stadium that left on mark on school history. Ken Heist struck out 21 batters that night at his final college game and this game has still left its mark as one of the top plays in the program’s history.

Then in 1967 was the year that Arizona Baseball opened their gates of Wildcat Field, which after multiple retitles is now known as Kindal
l-Sancet Stadium, the home to the University of Arizona softball team. Arizona Baseball played a cumulative of 1,604 games at that ballpark until 2011 when they officially called the team to move to Hi Corbett months later.  That field was home to 3 National Championship teams and is a great deal in the history of Arizona baseball.  The location of the field is where the new football indoor training facility is located which is right across the street from both the Football Stadium as well as the McKale center. Remarkably, in the Wildcats first season at Hi-Corbett Field, Andy Lopez led the wildcats to their 4th National Championship and was an amazing season to open college baseball returning to Hi-Corbett Field.

Throughout their time at the polished field, the University of Arizona baseball team has made a name for themselves in the Pac 12 as they  recently were the runner up in the 2016 College World Series under new head coach Jay Johnson. Previous to that, the Wildcats won the 4th National Championship in the baseball program’s history in 2012 under Andy Lopez. Since the Arizona baseball team has moved over to Hi Corbett, they have reached 3 regionals, 2 super regionals, and 2 college world series, while also winning the conference in 2012. In the spring of 2018, Arizona baseball honored the passing of Jerry Kindell by painting his season ticket holding seat red. On each one of the players and coaches uniforms, the number 9 was stitched on the left side of the jersey, and JK stickers were put on their helmet. The seat will remain red and off limits for people to sit there, which is located right behind home plate, up near the press box.

There have been some new additions to Hi Corbett Field as the 2016 season fell just short of a National Championship. The 2016 team was runner up losing the National Championship game to Coastal Carolina, but fell nothing short of an amazing season. Following the record breaking season, donors made contributions to update the facilities at Hi Corbett field. The first addition to Hi Corbett was a new locker room. $500,000 dollars was put into upgrading the Wildcats locker room,  making it an attraction to new players and recruits. Improvements were finished by opening day in 2018. Renovations to Hi Corbett Field gives the Wildcat baseball team an advantage to bring in high quality players. Which in turn, makes Hi Corbett a better place to spend weekends watching spectacular baseball. “For players, a newly renovated and oversized home clubhouse is attached to the home dugout along the first base line. Inside is a large locker room area with individual wooden lockers for each player, showers and restrooms, a rehabilitation center, a training room, coaches game day locker room, televisions, new furniture, a video room for film study and an equipment room. Cosmetic upgrades to flooring, painting and UA branding were completed in”(Hi Corbett Field). 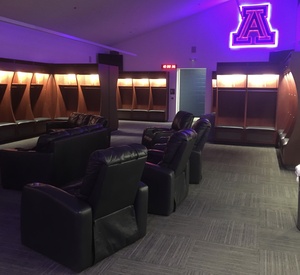 Another addition to Hi Corbett field is the state of the art batting cages built behind the right field wall. Construction on this 1 million dollar hitting facility started in 2017 following the great 2016 season. It is called the Terry Francona Hitting Center as Mr. Francona himself was the biggest donor to this facility. Francona is an alumni of the University of Arizona and former All-American for the Wildcats. “Francona, the current manager of the Cleveland Indians, has won two World Series with the Red Sox. He lost Game 7 in 2016 with the Indians. Francona won a national championship at Arizona in 1980 and also received the Golden Spikes award, which is equivalent to college football's Heisman Trophy”(Cooper). The fully turfed Hitting Center contains 4 tunnels, 4 mounds, a back cage with two sets of plates for bunting, a JBL sound system, and retractable nets. The facility is large enough for the whole Wildcats team to practice in. With the outside of the hitting center connected to the right field wall, it makes a distinct sound when the ball hits the hitting center, indicating a homerun. 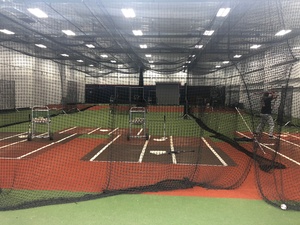 The pitchers were not lost in all these renovations. With all the new additions in 2017 like the locker room and Hitting Center, the first baseline has a new look as well. Yes, that is where the Wildcats bullpen is located. A renovation was also done to the bullpen holding three mounds, a turf catchers area, with a nice looking natural grass in between. The advantages of having this attractive bullpen gives the pitchers a lot of space to work with. This allows all the pitchers to throw at once and prepare themselves for the spring season and for games. It also provides easy access to the first base dugout and the locker room allowing it to be a primary place for pitchers to prepare and receive instruction from the coaches. 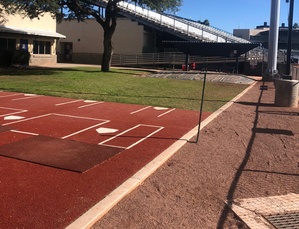 There has also been an exquisite addition to the right center wall: the acknowledgement of the number 15, Trevor Hoffman. Hoffman, a former Wildcat was inducted into the Major League Baseball Hall of Fame in 2019. The Wildcats acknowledged his number next to Terry Francona’s number 32 on the right field wall right near the banner of the team’s Nationals Championships, NCAA Tournament appearances, and College World Series appearances. Trevor Hoffman’s number was acknowledged on opening day of the 2019 season for the Wildcats on February 15 in front of a total attendance of 3,431 fans. He is one of the five numbers and players acknowledged for the University of Arizona baseball team. The other four are Terry Francona, John “Button Salmon (#1), Kelsey Osburn (#41), and Lee Franklin (#2). 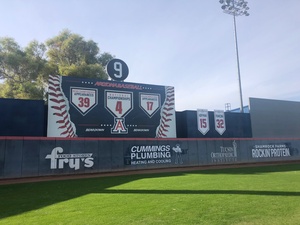 The field used to be the spring training field for the Colorado Rockies. Hi Corbett was built in the 1920’s and can seat up to 9,500 people. This baseball field is now the new field for the Wildcats and is where all of the home games are held. Before the Wildcats took over Hi Corbett it had a completely different name. The ballpark was named Randolph Municipal Baseball Park. There were many teams that have played at this field before the Wildcats. Some of those teams were The Tucson Waddies and the Tucson Cowboys. The Tucson Cowboys took over the field from 1933-58. In 1946, Hiram Corbett got the Cleveland Indians to have their training camp at the field and that was a huge deal. In 1951 Tucson had decided to change the name from Randolph Municipal Baseball Park to Hi Corbett Field in honor of Hiram Corbett. Other teams that also had used Hi Corbett field were AAA Team and the Tucson Toros. They played there until both of those teams moved to the sports complex.

Hi Corbett field has housed many Tucson teams and even some MLB teams for training camps. This field has so much to offer Tucson and it is also located in a good area as well. Baseball is Americas past time and without a field the Wildcats and all of those Tucson located teams would be practicing and playing their games at other fields.

The field has so much history within as many baseball greats have stepped foot and played a game on the field.  There are over 30 hall of famers that have played a game on this field, which makes it one of the most historical ballparks in all of America.  Even with the renovations, the field has never changed locations and still looks similar after all of the years that have passed by.  It is one of the most historical landmarks in all of Tucson and hopefully the Wildcats baseball team can add more famous players and championships to the already impressive list of accolades that Hi-Corbett Field has hosted.