The International Wildlife Museum of Tucson 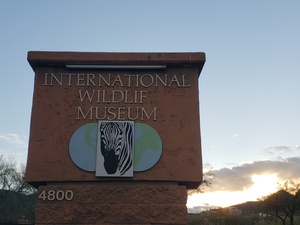 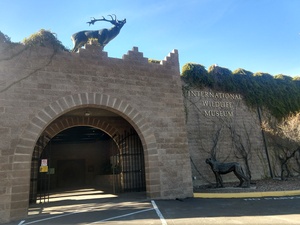 The museum is closed three days of the year: Thanksgiving, Christmas Eve and Christmas Day.

Parking is located all around the perimeter of the facility

Discounts are provided to groups if planned in advance. One adult will be permitted entry for free for every ten children they accompany. Guided tours for groups larger than ten will be charged $1.00 extra per person.

*For facility and rental information refer to https://www.thewildlifemuseum.org/facilities/

Nearly fifteen minutes west of the University of Arizona campus stands a 38,000 square-feet castle-like structure with an elk statue standing atop the main entrance. With a motto of, “Education, Conservation & Appreciation,” this structure stands to share knowledge and the conservation of wildlife as it displays more than 400 species of insects, mammals and birds from around the world.In February 1988, the International Wildlife Museum located at 4800 West Gates Pass Boulevard, was founded by Casper J. “C.J.” McElroy as part of an educational program by the Safari Club International Foundation, a non-profit ecological corporation, also founded by McElroy in 1972. According to the museum, some of it's collections are over 100 years old, and have been donated by individual persons, such as C.J. McElroy himself, different government agencies, wildlife rehabilitation centers, captive breeding programs and zoos. McElroy, who died March 01, 2002, was said to have hunted in fifty countries and six continents, with more than 70 African safaris during his lifetime. Notably, the museum’s structural design was influenced by one of McElroy’s visits to a Foreign Legion while hunting in Chad, Africa. In dedication to C.J. McElroy, there is a room located in the heart of the museum  with various animals on display. The large room, known as McElroy’s Hall, was designed similarly to his living room where he taught children about wildlife. However, you must walk through a few different collections, preys and predators, and a small informative exhibit that notes the processes of taxidermy and exhibit creations,  before reaching this massive collection of taxidermy animals. There stands a giraffe that allows visitors to walk underneath to gain perspective on the size of the creature. 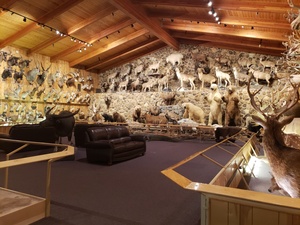 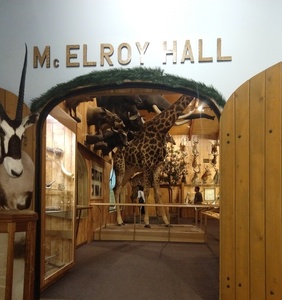 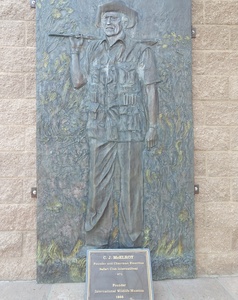 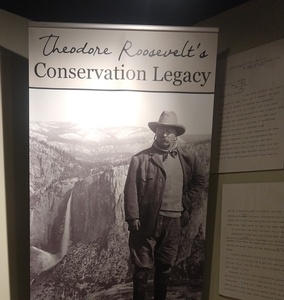 Upon entering through the main doors and purchasing a ticket, individuals walk through the permanent exhibit dedicated to Theodore “Teddy” Roosevelt's conservation legacy – an exhibit that had its grand opening in 2017. On display are letters from the 26th President of the United States' typewriter plastered along the wall, alongside a timeline of events from his birth on October 27, 1858, until his death in 1919. It is here that visitors will learn about Roosevelt's work towards conservation and his achievements with starting some of the earliest conservation projects. This exhibit lays a great foundation for the purpose of the International Museum, as it's main focus is the conservation of various wildlife.  One of the plaques from the earlier years of Roosevelt’s life explains how he, while traveling to the Dakotas to hunt Bison, learned most animals were nearing extinction. Roosevelt then began his pursuit of wildlife conservation. In addition to the timeline and photos around the wall, there are artifacts from Roosevelt’s era on display in a glass case near the door leading into the introductory hall and the rest of the tour. 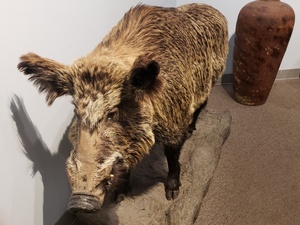 The International Wildlife Museum is one of ten permanent sensory safari facilities where children and adults are encouraged to learn by using all their senses, including their sense of touch. In the introductory hall, visitors can first learn more about the difference between which animals have horns and those with antlers. Though antlers are shed and regrown annually, horns are never shed and grow continuously. However, the pronghorn antelope is an exception to this observation as it sheds and regrows it's horn sheath yearly. Similarly, there is a section dedicated to distinguishing between the different types of teeth animals have. Plaques on the wall explain the difference between the teeth of herbivores, carnivores, omnivores, grazers and browsers. Notably, deer and giraffes are considered browsers, while zebra, horses and bison are grazers. There are jaw bones on display for visitors to guess which teeth belong to one of the five categories mentioned above.

Like the mammal’s teeth display, there is a small wooden counter with fur swatches for visitors to feel before guessing which animal the protection may belong to – though most of the fur swatches seem to be missing in this interactive area.

Before leaving the introductory hall and moving into the world of birds, visitors can gather in a corner that explores the process of taxidermy, with the opportunity to push a button that switches on a light to the different types of glass eyes used on different animals, such as an alligator. This exhibit and many of the others at the museum, encourage the interaction between exhibit and visitors.

Upon entering the World of Birds, visitors can read and enjoy different dioramas of the fowl in their habitats, from coniferous forest birds to birds of paradise. Individuals can also compare the differences in 50 eggs, as they sit alongside on another, produced by these birds.

Continuing the tour, visitors can get up close and personal in learning more about the relationships between predators and prey with dioramas of these relationships, such as the ostrich and the spotted hyena, where the scene depicts the hyena stealing an enormous ostrich egg. The next two exhibits on the tour typically rotate, however, the conservation room leads into McElroy Hall, right before the Sheep and Goat exhibition describing the conservation projects and equipment used to protect them in the wild. 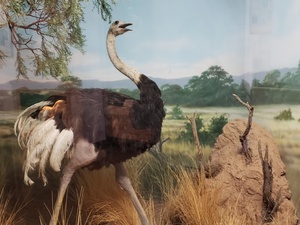 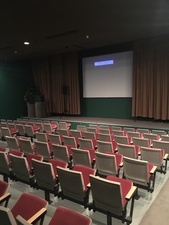 In addition to the sounds of critters within their habitats playing through hidden speakers positioned near dioramas, the International Wildlife Museum also uses televisions and monitors to share further information and also as a way for individuals to quiz themselves on specimen facts as they walk through the different exhibits.

The movie theater (which is displayed above) is very high quality and is capable of accommodating a lot of people. The content played within the theater focuses on the values of the facility. They tend to play documentaries that showcase the natural beauty of the animals on display within the museum. It also shows content that is meant to educate visitors on natural conservation and other ecological issues. Please note, the movie theater is typically open from 10 a.m. to 4 p.m. Monday through Friday.

Lastly, there is a small gift shop and a place to eat ( small scale concessions can be purchased at gift shop) before reaching the entrance/exit doors by the ticket booth.

Notably, the museum is currently under renovations to add a kid's room near the food area. *

Adding to the variety of informational made available in the International Museum, a children's room has been added that focuses on dessert life such as that found in the local area. The addition includes a walk through cave that creates a portal into the night life of dessert animals. This is a short tour for individuals to gain a greater sense of what it is like walking through Arizona at night. From rattlesnakes and owls to the bigger creatures like bobcats and mountain lions found in Arizona, you gain a better understanding of the diverse wildlife species lurking in the dark, some even wandering the City of Tucson’s streets.

There are all types of critters found in Arizona, many that bring people from all around to observe the wildlife in and around the landscape. Therefore, it should not be a surprise that individuals may want to get up close and personal with the different specimen found throughout the world – at least a chance with those on display at the International Wildlife Museum. Studying the specimen inside the museum makes it easier for individuals to gain a better understanding of the animals’ diets and habitats in ways you would not be able to in the wild – that is, without putting yourself in danger. The Safari Club International also had its reasons for opening the museum. The SCI believes the museum is a constructive way to show individuals how legal hunting contributes to the welfare of game and non-game species alike.

Another added feature of the museum is the efforts made to create scavenger hunts to keep children actively learning throughout the self guided tour of the museum. The museum provides a sheet of paper, differing based on age range of the participating child, with prompts for completing the hunt. 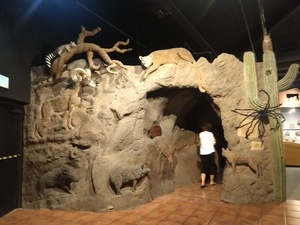 Exhibits can be found at the link below; link provides temporary and permanent exhibits