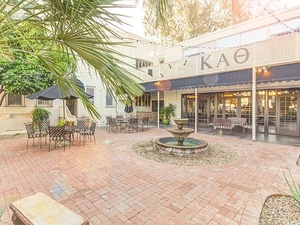 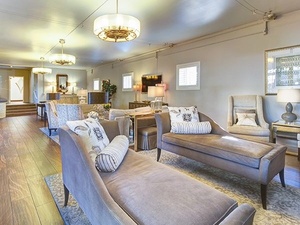 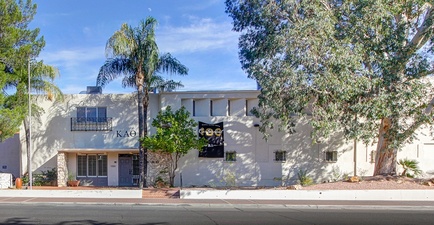 Street View of Beta Delta Kappa Alpha ThetaKappa Alpha Theta is one of thirteen Panhellenic sororities on the University of Arizona campus. Sororities engage in formal recruitment early in the school year, and some sororities engage in continuous open bidding throughout the year. If you are interested in joining a sorority at the University of Arizona please check out the Sorority and Fraternity Programs website https://greek.arizona.edu/sorority.

The History of Kappa Alpha Theta

The chapter of Kappa Alpha Theta, or Theta for short, was founded in 1870 at Indiana Asbury University now referred to as Depauw University. Theta was created by four founders, Bettie Locke Hamilton, Alice Allen Bryant, Bettie Typton Lindsey and Hannah Fitch Shaw. These women were some of the first admitted to Indiana Asbury as the university only began accepting students in the fall of 1867. Bettie Locke Hamilton in fact was one of the first five women admitted. While Bettie was getting her education she was asked by a member of the Phi Gamma Delta Fraternity to wear his badge. Bettie said she would only wear this badge if she became a full fledged member of the Fraternity since this was at a time when sororities did not exist. The fraternity refused this idea, and thus Bettie along with her friends created Kappa Alpha Theta, the first Greek letter Fraternity known among women. Together the group wrote Theta’s constitution, planned it’s ceremonies, designed their badge and recruited other woman on campus worthy of membership. This Alpha chapter quickly grew prompting the creation of the Beta chapter at Indiana University.

In the present Theta strives under the idea of becoming “Leading Women” in all aspects, intellectually, socially and morally. The kite in which Kappa Alpha Theta uses signifies the values of the members. Each point of the kite reflects a point. The four points of the kite refer to leadership, commitment to service, personal excellence, and intellectual curiosity. There are 143 Theta chapters across the United States and Canada to which Theta was initiated over 250,00 members since its founding. For over 25 years Theta has joined forces with Court Appointed Special Advocates, or CASA, to raise money and awareness. A CASA volunteer gives the opportunity to help impact the lives of foster children both locally and throughout the United States. CASA’s are volunteer advocates for children in foster care who have been abused or neglected. Theta is “For the Child” announcing in 2016 their plan to raise $1 million dollars for the foundation. Each chapter raises money for this organization through their own philanthropy events throughout the school year.

In November of 1928, the Beta Delta chapter of Theta officially had its own chapter facility on campus. This was the first official opening of a “Woman’s Chapter House” of a women's fraternity on campus. It originally housed 32 women. There have been two major remodels to the chapter facility since. The first happened in 1948 when the facility was expanded north on Mountain Ave. With these additions came the living room, upstairs chapter room, study rooms, and one additional bedroom. The second addition happened in 1961 which gave the chapter house the look it has today. The construction involved adding the entire north wing that creates a U shape that surrounds the outside courtyard. This addition also created a new front door, a kitchen, a tanning porch, an additional sleeping porch, and multiple dorm style bedrooms.

Blue Prints from the 1948 Expansion

The chapter facility has a capacity of 58 live-in members and their house Mom, as well as featuring 41 parking spaces in a lot adjacent to the chapter facility. It is located on the corner of “Greek Row”, just west of Alpha Phi and faces across the street neighbors Alpha Epsilon Phi and Phi Beta Phi. The chapter facility is a two-story building which features an underground basement. The entire outside of the facility is painted beige with intricate brick work for external flooring. Beta Delta features two fountains, a small one in the front and a larger one in the courtyard. Inside there is one large living room as well as a small “TV room”. A large dining room where chapter dinners are held and a fully stocked kitchen for the kitchen staff. The main chef is named Jaime, who is the artist behind Theta’s meals. All Thetas receive two meals a day on Mondays through Thursdays and brunch on Fridays. The live-in members additionally receive breakfast each day and receive a catered dinner on Sunday nights. Live-Ins also have access to their own kitchens giving them the ability to make food when there are no kitchen staff present. There is also a “Date Room” now used for Theta’s to study but historically is where Theta’s dates would have to wait while the Theta got ready, thus obtaining the nickname the “Date Room”. Lastly, Theta also features a large study room where many Live-Ins have their own personal desk as well as a printer and copier. This fraternity house has been standing for over 100 years, making it one of Kappa Alpha Theta's national monuments. This particular house has also been featured in articles such as the The 22 Nicest Sorority Houses in the Country, written by Lauren Finney. (https://www.townandcountrymag.com/society/tradition/g2977/best-sorority-houses/).

Currently as of 2021, the Beta Delta chapter has over 300 members, and recruits a new member class annually during formal recruitment of about 100 women. Thetas currently hold the highest GPA throughout all other sororities on campus and hold the second highest GPA in all the Panhellenic sororities and fraternities. Thetas also participate in other groups throughout campus such as various honoraries, jobs, programs and labs throughout campus. To support CASA, Theta’s national Philanthropy, Beta Delta typically puts on two main events during the year. Cook Out for CASA or CASA Carnival and Kicks for CASA. Theta typically fundraises a majority of funds through the philanthropy event Cook Out for CASA, a tailgate style event taking place in the Theta parking lot. Members of the university and community have the opportunity to purchase burgers and hot dogs as well as play various games to raise money. In 2019 Theta began trying a new fundraising event, CASA Carnival. This event also takes place in the Theta parking lot, but unlike Cook Out for CASA, the CASA Carnival will feature different snack like food as well as carnival-style booths that Theta members run that those who attend the event can participate in. There are many booths that feature classic carnival games such as magnet fishing, and some booths involve the opportunity to pie a Theta. Kicks for CASA takes place on the Recreation Center field in the Spring. For this event local Fraternities, Sororities and non-Greek organizations compete in a soccer tournament with the winners winning a week of Theta meals! Theta members participate by coaching a specific team. These events are open to students and the public. Tickets to these events are sold by Theta’s through their personal Crowd Change accounts and also at the door. The money raised from these events goes directly to Pima County CASA where they have been able to create a new reading program directly from this money. Thetas put on numerous sisterhood events throughout the semester as well as typically three date dashes.

Though sororities are associated with exclusivity, the Beta Delta chapter of Kappa Alpha Theta strives to be as inclusive as possible. The Beta Delta chapter holds meetings on inclusivity and diversity with the intention of educating it's members. The chapter addresses current events in ways that are not preformative, but rather action seeking and teaches members how to involve these  in their lives. Keeping members aware of how their actions affect others is a core value to all Thetas and members are expected to reflect this.

Kappa Alpha Theta During the Pandemic

Kappa Alpha Theta has evolved many standard practices to abide to Covid-19 rules for the safety of the Tucson community and Theta members. Kappa Alpha Theta headquarters remains closed, but chapters that follow strict rules remain open to members. When the University of Arizona switched it's in-person classes into online classes, Theta moved its events online as well. Kappa Alpha Theta holds regular meetings over Zoom so it's members can keep up with Theta happenings while remaining socially distanced. The Beta Delta chapter of Kappa Alpha Theta still holds occasional in person events that abide by social distancing and sanitation guidelines. These events range from socially distanced picnics, to take home art projects that members complete over Zoom. All in person events require members to stay six feet apart and wear masks. Meals have switched from being served buffet style, to take-out boxes that Thetas can personalize through an app. Non-Theta guests are unable to visit Kappa Alpha Theta as an effort to keep social distancing possible for members. If a live-in Theta were to contract the Coronavirus, the house would be placed in quarantine with no members allowed in. However, Kappa Alpha Theta is one of the only chapters at the University of Arizona that have not been required to enter quarantine. 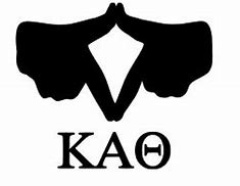 Hand sign example #1 With most greek organizations comes hand signs that showcase ones membership to the Chapter. Examples of signs used by Kappa Alpha Theta members are shown below. 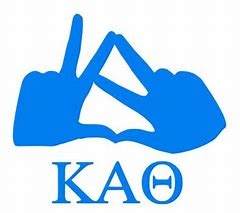 Additional notable Theta members can be found through the link below.

Video on the History of the Beta Delta Chapter- https://www.youtube.com/watch?v=4Zv2MDleKkw