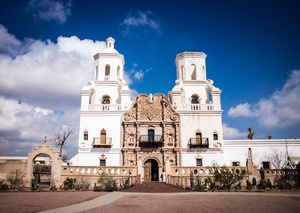 Exterior of the Mission. Photo: https://www.gonewiththewynns.com/San-Xavier-Bac-AZ

As Spanish colonists moved north throughout what is currently known today as Mexico, up through Arizona, they were looking for new land to claim and advance the Spanish mission. The Jesuits were in search of new settlements for missions and ended up creating a chain of missions throughout the Sonoran Mountain range. The San Xavier Del Blanc was founded in 1700 by Father Eusebio Kino, a man tasked by the Jesuits to spread Christianity to new Spain. Father Kino was born in Northern Italy on August 10, 1645. He arrived in Arizona, then began exploring the land that is now San Xavier del Bac Mission. Construction of the church began in 1783 and was completed in 1797. The Mission is often referred to as the white dove of the desert, highlighting the bright white stucco finish with the brown desert background.   It was named for Francis Xavier, a Christian missionary.

The historic landmark is located 9 miles south of downtown Tucson,  on the Tohono O’odham San Xavier Indian Reservation. It is just off of Interstate 19 (exit 92). 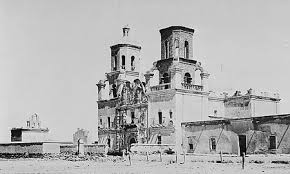 One of the oldest known photos of the Mission.

San Xavier Mission was founded by Father Eusebio Francisco Kino in 1962, when Southern Arizona was part of New Spain.  He was a Jesuit and began construction of the first mission church on April 28, 1700. In 1767, Charles III of Spain banned the Jesuits from the Spanish lands in America and installed Franciscans to be in charge of the mission. After some indian attacks by the Apache tribe, the mission was rebuilt between 1783 and 1797 by fathers Juan Bautista Velderrain and Juan Bautista Llorenz. The way these men were able to afford to rebuild the church is by using money donated by Sonoran ranchers. Because of all of the local support Juan Bautista Velderrain, and Juan Bautista Llorenz were able to hire the  architect Ignacio Gaona and a large work force of O'odham to create the present church.

These settlements were usually run by Jesuit or the Franciscan friars, creating expansion of Spanish European culture and influence throughout new lands. These missions had hopes and desires to convert the native Americans to Christianity Aswell as Hispanicize them. The Europeans settlers would bring domesticated horses, new crops like wheat, and transformed the lives of native Americans, giving them permanent settlements rather than temporary.

In 1872, Sisters of St. Joseph of Carondelet opened a school for the Tohono O’odham children and the building was repaired. In 1887, and earthquake knocked the mortuary wall and destroyed parts of the mission itself. Repairs began in 1905 under Bishop Henry Granjon. In 1978 a group of community leaders formed the Patronato San Xavier which promotes the conservation of the mission. The preservation continues to this day when funds are available. Donations can be made by contacting [email protected]. You can also send donations by doing the following:

Send your tax-deductible donation to:

The Franciscans returned in 1913 and recently, the mission became a separate non-profit entity. Franciscan Sisters of Christian Charity have taught and still teach at the school since 1872 and reside in the Mission convent.

1767  Jesuits are expelled from New Spain

1768  Spanish Franciscans take over the Mission

1783  Construction begins on the present church

1797  The Mission church is completed

1854  Gadsden Purchase puts the Mission inside the United States

1913  Franciscans return to the Mission

1992  Conservators begin a 5-year rescue effort of the interior

Today the restoration continues when funds are available. 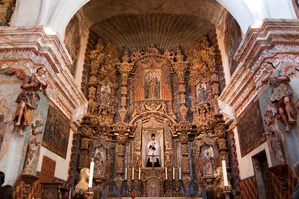 Interior of the Mission. Photo: http://www.ontheroadagainforyou.com/san-xavier-mission-del-bac-corona-de-guevavi-tubac/

The main building of the mission is in the shape of a Latin cross, showing how the influence was strictly Spanish, Piman influence was absent from the structure and architecture outside of some desert building materials. The building has two octagonal towers in the front, a large dome covering the transept crossing, with smaller domes flanking the north and south. The mission includes 6 primary areas: the mortuary chapel, dormitory, patio, garden, convent, and the main church. The Interior of the church was built with adobe bricks set in Lime mortar, with the exterior primarily white stucco. The interior of the mission is where the artisanship and Spanish influence can be seen throughout. The interior features iconic religious imagery, paintings, and wall carvings, with the roof being structured with masonry vaults. Wooden statues of saint Xavier and Mary are embedded in the wall behind the altar. Other saints and native Americans have carved statues throughout the mission and show appreciation for the past lives of original members of the settlement. The architect of the mission was Ignacio Gaona. The interior is full of paintings, frescoes, statues and carvings with displays of New Spain and Native America art and motifs.

There is not much known about the people who decorated, but it is believed to commissioned by Father Velderrain’s successor. Although the exact artists of the interior are unknown, there are symbols and architecture styles that can give some insight into the history of the design. Images of seashells, which can be seen all throughout the missions window treatments and other detailed interior elements, are a symbol of pilgrimage in relation to the voyage the patron saint of Spain, Santiago or James the Greater made. Also, the architecture contains elements seen throughout the Baroque era that involve dramatic yet playful elements. These elements include: faux doors, marbling, theatrical curtain displays, and an overall sense of symmetry and balance.

The mission is considered the finest example of Spanish mission architecture in the U.S. and was declared a National Historic Landmark in 1960. 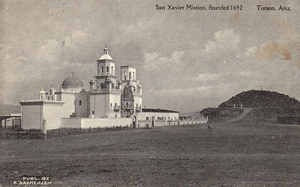 In 1887, a massive earthquake struck the mission causing the church façade and mortuary wall to be damaged. Due to these circumstances, extensive repairs were needed. In 1905, Bishop Henry Granjon thought it was time for the church to finally be fixed. He had the entire church replastered and repainted. He had new walls and arches added to the structure to help create a more secure building. In 1908, Granjon had a shrine of the Virgin Mary built 300 feet east of the church, it was meant to replicate the Grotto of Lourdes.   The Church also saw a need for repairs in 1939 when a lightning strike hit the Western Tower Lantern.

In 1978 a group of community leaders decided they wanted to create a conservation group for Mission San Xavier. They called this group the Patronanto San Xavier. Shortly after this group was formed however this mission saw more problems. Water was seeping into the west wall of the church's sanctuary, and because of this the Patronanto were forced to take action. It took five years for the Patronanto to finish but when they did the Misson San Xavier was almost as good as new. 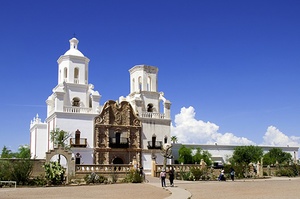 The mission is still run by the Franciscans and still serves the Native community by whom it was built. The church is open to the public daily with the exception of church services. The mission is very important to the Tucson community because of its rich history. This type of Spanish colonial architecture is not common in the United States so the mission is a very important landmark. The mission itself has had its fair share of damage and the restoration of the church continues today and is very important. According to the mission’s website, the mission remains a testament to the endurance of culture throughout its history. About 200,000 people come each year to witness the beautiful architecture and history that this Mission has.

Besides holding mass, the mission also has a museum and gift shop. The museum is filled with historical artifacts and is free to the public, however donations are accepted and greatly appreciated. The gift shop has various items ranging from t-shirts to candles to authentic baskets made by members of the Tohono O’odham tribe.