What do you know about Old Tucson Studios?

Located in Tucson, Arizona, Old Tucson Studios is an old western town famous for its location in more than 300 movies and TV shows. It is presented as a movie studio combined with a theme park that displays living history presentations of mock gunfights, stunt shows, rodeos, and musicals. It also offers its customers historic tours, rides, shows, games, gift shops, and food outlets for people of all ages. By the 1980s, the attraction was 2nd in Arizona, visitation only to the Grand Canyon. 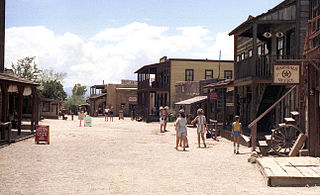 Old Tucson Studios opened in 1939 when Columbia Pictures created a replica of 1860’s Tucson for the Movie Arizona. Local technicians and carpenters built more than 50 buildings in 40 days. Descendants of the Tohono O’odham Nation, Arizona’s first inhabitants, assisted in the set production. Without having running water, they made more than 350,000 adobe bricks from dirt to create the authentic-looking structures for the film, where many still stand today. Following the completion of filming, Columbia Pictures donated the Old Tucson set to Pima County. After the filming of Arizona, Old Tucson was vacant until the 1945 film The Bells of St. Mary’s, starring Bing Crosby. Hollywood began to notice Old Tucson, which became a hotspot for filming and became known as “Hollywood in the Desert.” During the 1950s, Western movies became common, and films such as Gunfight at the OK Corral (1956) and The Lone Ranger and The Lost City of Gold (1957) were filmed at Old Tucson. By the early 1960s, the studios began to grow and expand to create more buildings for movies. Western film legend John Wayne starred in four movies at Old Tucson, including Rio Bravo (1959), McLintock! (1963), El Dorado (1967) and Rio Lobo (1970). Old Tucson had become the leading western film location. Today, Old Tucson has mainly been used for documentaries, television commercials, fashion magazine spreads, and catalog shots.

A devastating fire took place at Old Tucson Studio's on April 24th, 1995, destroying more than 40 percent of the movie set and various buildings, wardrobe, and the theme park. The building originated inside building 74, which was a local shop to purchase signs. There was no explanation as to what triggered this massive fire. A show had been taking place directed behind the sign shop when the fire had erupted. The audience had to be escorted by the actors on stage, and around 300 people had to exit the park. After the front gate was alarmed by this, they immediately dialed 911; The Tucson fire department arrived at the fire 10 minutes later to realize they needed more firefighters and equipment to stop the fire's spread. More than 200 firefighters had to assist this fire. The fire continued to escalate to the propane tanks leading them to burn, causing a firestorm. Thankfully, most of the park had been rebuilt and required 20 months of reconstruction after this tragic accident. Many filming equipment and costumes for elite movies were destroyed, and the new buildings could not replace particular film sets. On January 2nd, 1997, the construction was finished and opened up to the public, offering a new look.

Unknown-3 2.jpeg - Link to an image of the fire

What to do at Old Tucson Studios?

They are known as one of Tucson's best attractions, giving you various activities to partake in at this studio. Old Tucson Company provides its customers with a great view of the Tucson mountains and the Sonoran desert during their C.P Huntington train ride! Shopping and restaurants are included. Antique car rides, Horseback riding, Live performances, Shooting gallery, Escape rooms, Ziplines, Museums, carousel, and much more!

Children (ages 3 and under) are admitted free of charge.

Nightfall is hosted at Old Tucson Studios, three or four days around Halloween every year. It is one of the most popular attractions in Tucson around the holiday.  Nightfall incorporates all of Old Tucson Studios, altered to create a haunted house like experience. This includes walkthroughs, employees and actors in costumes. Listed below are some of the features of Nightfall.

"Due to the subject matter and realism of Nightfall, this event may not be and most likely is not appropriate for younger people, those with medical conditions or squeamish adults. Medical Conditions include but are not limited to heart conditions, digestive disorders, and most Phobias. All guests enter at their own risk.  Old Tucson takes no responsibility for guests who are offended by subject matter, verbal abuse or have bladder control issues.  No refunds will be given; no re-entry allowed."

Shows and attractions are subject to change every year.

NIGHTFALL WILL BE OPEN:

CHILD (ages 8 and under)  admitted free

All information for Nightfall cited from http://nightfallaz.com/.