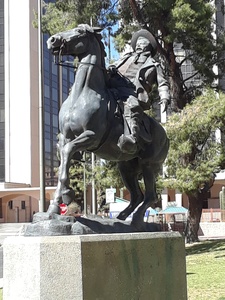 Location and description of the statue.

The statue of Pancho Villa is located at Veinte de Agosto Park in Tucson Arizona. The statue itself is made of bronze and towers at a height of fourteen feet and weights approximately five tons. The statue was created by “Julian Martinez and foundryman Javier Portilla” in the 1980s.[1]

History of the statue

How did Tucson acquire the statue?

The statue of Pancho Villa has had a very controversial past ever since it was first erected in Tucson in the 1980s, and the statue’s controversy persisted throughout the decades. The statue was erected in Tucson in June 1981 and was a gift from the Mexican press organization “Agrupacion Nacional Periodista” as well as from the Mexican government [2]. The statue was given to Arizona in friendship according to former Arizona Governor Bruce Babbitt, and it was accepted by the city of Tucson by former Tucson’s director of operations Tom Price. [3] After the statue was accepted by the director of operations it found its home in Tucson, but it was not welcomed by everyone. 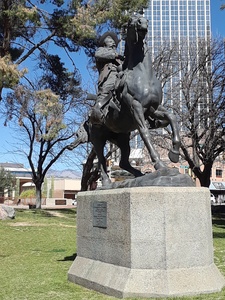 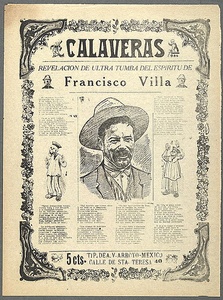 In order understand the controversies related to the statue it is best to know about the history of Pancho Villa himself. Born in Durango Mexico. In 1887, Francisco Pancho Villa is a noteworthy individual in both the history of Mexico and in the history of the southwestern United States.[8] This can be attributed to the infamous acts he committed, as well as for his accomplishments during the Mexican revolution. In the beginning of the twentieth century Villa” joined Francisco Madero’s uprising against Mexican President Porfirio Díaz in 1909.”[9] This deed cemented Villa’s status as a revolutionary for his contributions in fighting the dictatorship of Porfirio Díaz. However, Villa’s life was not all shining accomplishments, and he did commit several crimes as well as being a notable revolutionary. One of Pancho Villa’s most well-known deeds was when he crossed the border into the United States in 1916 and killed several American citizens in the city of Columbus New Mexico.[10] This event led to Pancho Villa becoming vilified in the United States and is the most sited reason for the removal of the statue. While Pancho Villa was assassinated in 1923 his legacy still lives on today.

Because the statue portrays such a controversial figure, it was expected that the same would be attributed to the statue itself. Ever since the statue was first erected there has be numerous attempts to remove it. There have been numerous other attempts to remove the statue and everyone of these attempts are representative of the growing acceptance of the statue by the community. In the 1982 edition of the Newsweek, reported that one Tucsonan was suing the major of Tucson, Lew Murphy, for causing their emotional distress that was brought on by the statue.[11] This report occurred only one year after the unveiling of the statue and shows the public backlash towards it at this time. According to a 2011 article by the Arizona Daily Star, a teacher from Pima Community College began to protest the statue in 1989 and cited their reason for protesting the statue was due to Villa’s actions in Columbus New Mexico.[12] Moreover, the teacher continued his protest the next year before, but was discouraged to continue due to the amount of counter protesters in favor of the statue.[13] The recording of counter protesters shows how the local community is becoming more accepting of the statue. In 2018 the conservative legal group Judicial Watch attempted to remove the statue by stating that the statue “constitutes a public safety issue because people have to cross the street to look closely at it” and that the public is generally opposed to the statue.[14] These claims were both dismissed by Democratic Ward 6 representative of Tucson City Council Steve Kozachik. Nonetheless the media at this time heavily reported on Judicial Watch’s attempt to remove the statue. During this time many people began to voice their opinion on the statue and its value to the community. 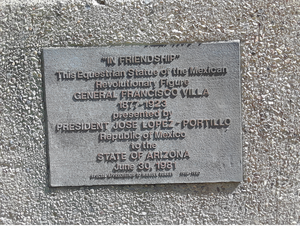 The plaque at the base of the statue.

Defense of the statue.

Unlike when the statue was first unveiled, in recent years there have been numerous accounts of people who are in support for the statue’s presence in Tucson. After there was a call to remove the statue in 2018 many people voiced their opinions of the statue, including several University of Arizona professors. Even Democratic Ward 6 representative Steve Kozachik stated that he “opposed the removal of the statue the first time, and have now done so again” In his January 2019 newsletter.[15] Others have stated that the statue is important to the community because it celebrates Mexican-American culture.[16] It is reasonable that the statue’s presence today is partly due to the support from the local community in recent years.