The Rialto Theatre as been an icon landmark for nearly a century. It was first built in 1920 on East Congress street, in conjunction with the Hotel Congress which began construction the previous year.  After World War I, Tucson’s economy experienced a shift from natural resources and agricultural center to that of a service industry. Tourism played a large role in this shift, due to the favorable climate that Tucson provided.

The Rialto Theatre was built by a California-based firm named William Curlett and Son[3]. This firm also constructed the Hotel Congress. The name Rialto refers to the medieval covered bridge in Venice to which ships were built. The bridges were connected to the entertainment district but at the time they were referred to as “Rialtos”[3]. These Rialtos were for the common people because the opera and theatre were reserved for upper class citizens such as the wealthy and nobility. This cultural emphasis on providing entertainment for the common people was at the forefront in building the Rialto in Tucson. However, the townspeople did not completely agree that this vision and felt that it was more of a “pie-in-the-sky fantasy”[1]. Fortunately, this was not a dream that would be unrealized.

When the Rialto opened in 1920, it was to the Silent Film Era. The first of these films was The Toll Gate, which debuted on August 29th, 1920, written by and starring William Hart[4]. Hart was considered the silent film era’s Clint Eastwood. To add to the films, the theatre possessed a Kilgen pipe organ that was played along with the films. There was also a small orchestra pit with four musicians to add to the appeal. The following week also showed Lady Rose’s Daughter starring Author Miller. The Rialto did not only showcase silent films. For instance, on December 21, 1920, a traveling show that was performing a transcontinental tour, stopped in at the Rialto.  The performance was “Ralph Dunbar’s Famous Presentation of DeKoven’s Famous Comic Opera Robin Hood, starring an All-Star Cast”[5].

The Rialto has endured numerous iterations throughout its storied—and to an extent, tumultuous—ninety-eight-year existence. The theatre was built in the silent film era, and featured vaudeville and variety shows before transitioning to “talkies,” or movies with sound, beginning in 1929. That same year, theater mogul Harry Nace leased the Rialto to Paramount-Publix, which obtained corporate ownership of the theatre in 1948. The theatre was temporarily shut down in 1963. Yet in 1973 the theatre changed hands yet again, thus beginning arguably the Rialto’s most controversial period: as a pornographic theater.

The introduction of pornography to the Rialto was met with controversy.  The lessors William B. Stidham and Marion Jennings as well as the Theatre manager John A. Jacobs reopened the theatre in 1973.  They decided to introduce pornography as their business model.  The first showing was of the infamous film Deep Throat, starring Linda Lovelace. At this time, the city of Tucson did try to get an injunction against the lessor’s business license, but it was overturned. Later the federal government charged Jacobs with receiving an obscene film in interstate commerce. Jacobs was charged and sentenced to six months in jail with a $5000 fine, but the charge was overturned, and the lessors ran their business for a further five years.

A notable incident happened in the 1970's due to the advertising of Deep Throat. One woman became enraged over the advertisements.  She began harassing the Theatre often and at times had to be removed by force.  The same lady also attempted to burn down the Theatre. She had broken in the Theatre and doused the balcony and upper balcony seats in gasoline.  The fire only managed to burn the seats and caused minimal damage.  The balcony was simply boarded up and they remained that way until 1993.

By 1978, the lease to Stidham and Jennings had expired and thus ushered in the next chapter of the Rialto. The Cine Azteca at the Temple closed, and the Rialto was reopened as El Cine Plaza.  The Plaza showed Spanish speaking films to audiences all over Tucson.  They showed such popular films as, El Diputado ("The Deputy") and Tarahumara[1].

As time went on and the Rialto continued to be an outlet for the art of Tucson, corporations wanted to become involved with the improvement and the renovation of the theatre. Corporations started to gain control of many theaters already in existence across the country to create standards and expectations that could be expected in other theaters that are unique to other cities. Paramount-Publix invested heavily on the renovation of the theatre, adding new high end seating, artwork (some of which is still visible today), and a new cooling unit in the theatre (which was much appreciated during the summer months). For a few decades following 1948, the Rialto Theatre was known as the Paramount to reflect its corporate ownership. It was expected to do well known as the Paramount but going corporate was not something that local Tucson residents were a fan of. Most of the time, the shows at the Paramount were not high in demand and usually sub-par, causing ticket sale and attendance to plummet. The classic charm that was known to the public seemed dead. People started to move away from the downtown center and its recognition as being a "hub" for entertainment was fading.

As transportation into downtown Tucson started to change, so did the number of visitors to the landmarks like Hotel Congress and formerly known Rialto. The Paramount sits on a one-way road and many foreign visitors were confused on how to access it properly, though some people say that this had nothing to do with the closing of the theatre.

Between 1963-1971, the Paramount served as nothing but a storage facility for Mitchell’s Furniture Gallery. The people who loved the theatre were not happy that the Paramount was just being used to hold furniture. However, in 1971, businessman Edward Jacobs re-opened the theatre as El Cine Plaza. The Plaza served as a Spanish first-run movie house. Since there was already another first-run Spanish theatre downtown, it didn't last very long due to the loyalty of the other theatre. 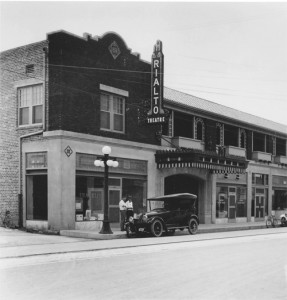 The Ghost of the Rialto

From witnessing the birth of a baby in his own office to someone dropping dead on the job, the manager at the Rialto until 1933 evidently saw it all during his time as an employee. And whats an old landmark without a ghost story! During a performance, a piano player was playing in the orchestra pit when he fell backward against the concrete part of the pit. This caused his piano bench to collapse along with the piano and fall on top of him. With the lack of medical advances in the 40's, he died later of head injuries. People to this day say that his ghost still lingers in some parts of the theatre.

The Rialto pairs with many big sponsors and they give their community opportunities to become a sponsor and help bring high-demand talent to our town. They offer volunteer and internship opportunities as well. The venue hosts an annual "themed" fundraiser that just wrapped for 2019.  Rialto Theatre's 7th Annual Fundraising Gala: A Night of Disco and Decadence at Studio 54,  Further information and detailed sponsorship packages can be found in the brochure below or by visiting https://www.rialtotheatre.com/2019-gala/ 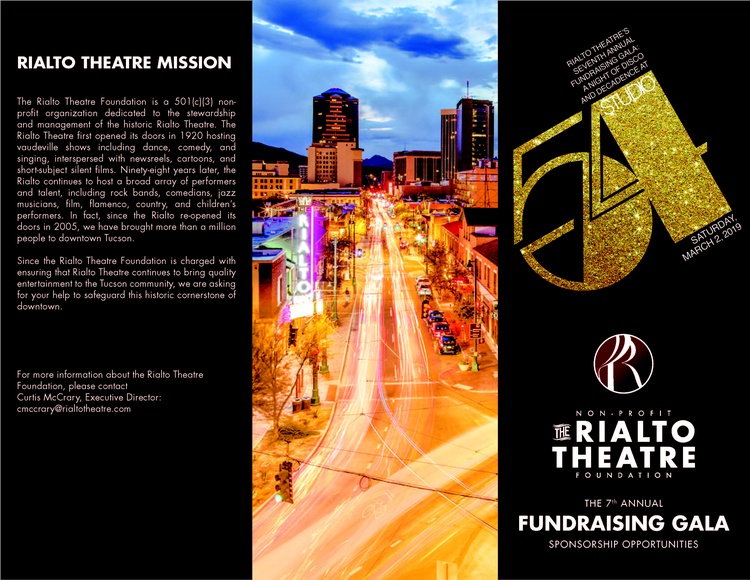 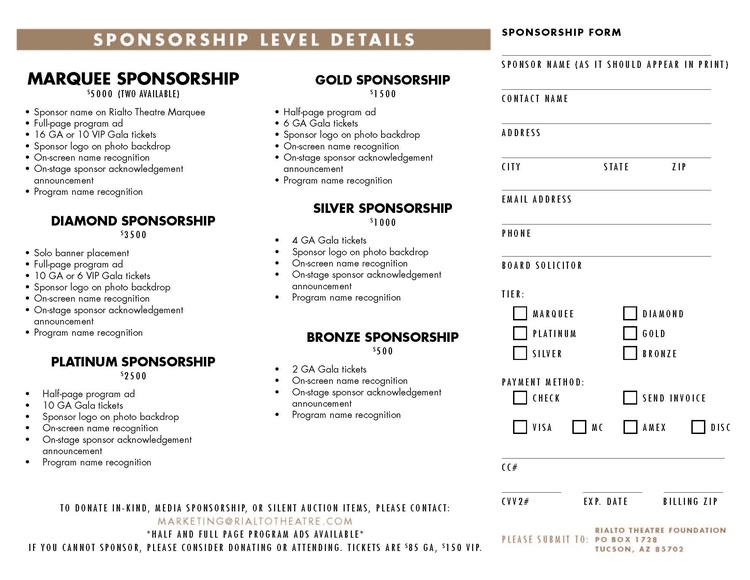 The theatre remained closed until 1995, when it was purchased by Paul Bear and Jeb Schoonover. The enterprising duo re-opened the theatre as a concert venue under the original name. The Rialto soon garnered a reputation as Tucson's preeminent music venue, as Bear and Schoonover hosted over 700 shows featuring a diverse range of acts such as The Black Crowes, Linkin Park, The White Stripes, Maroon 5, Dave Chappelle, Morrissey, Fugazi, Government Mule, Sam Butera, The Afro-Cuban Allstars, King Sunny Ade, Cesaria Evora, Arturo Sandoval, Dwight Yoakam, Merle Haggard, The Vagina Monologues, Quest for Fire and even the Jim Rose Side Show. In 2004, Bear and Schoonover sold the theatre to the City of Tucson, as part of Rio Nuevo, a downtown revitalization project. The Rialto Theatre is now operated by a nonprofit organization, the Rialto Theatre Foundation, which has leased the theater from the Rio Nuevo District for 50 years. The foundation also oversees show operations for another local nonprofit concert venue, 191 Toole. The executive director of the foundation is Curtis McCrary who continues the tradition of producing the finest concerts in Tucson. The Rialto Theatre is one of several historic theater and concert venues built along Congress Street, the others being Club Congress (directly across the street) and the newly renovated Fox Theatre several blocks to the west. Both structures were listed in the National Register of Historic Places in 2003

Becoming a member at the Rialto can save you money if you are a regular attendee. Certain benefits even carry over to 191 Toole shows. Seehttps://www.rialtotheatre.com/memberships/ for more details. 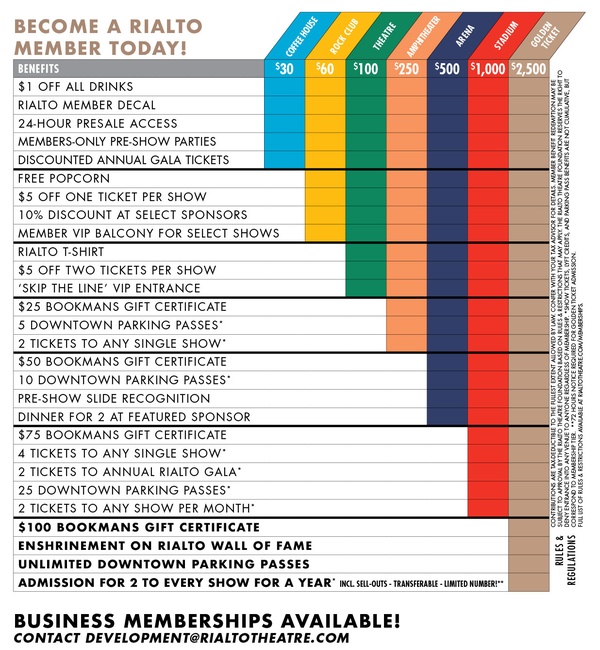 Contributions are tax-deductible to the fullest extent allowed by law. Confer with your tax advisor for details. Member benefit redemption may be subject to approval by the Rialto Theatre Foundation based on rules & restrictions that may apply. The Rialto Theatre Foundation reserves the right to deny entrance into any venue to anyone regardless of membership. *Show tickets, Bookmans credits, and parking pass benefits are not cumulative, but correspond to membership tier.  **72 hours notice required for Golden Ticket admission.  For complete details, see the link to Membership Rules & Restrictions below.

*MEMBERSHIP BENEFITS & 191 TOOLE:
The following Rialto membership benefits also apply at the 191 Toole Venue:
– $1 off all drinks
– Golden Ticket entrance to any show
– Stadium 2 tickets monthly to any show
– Voucher for 2 tickets to any show
Please notify the box office at least 72 hours in advance of show if using ticket benefits.

PLEASE NOTE: 24-hour presale ticket access, $5 off tickets to shows, and first entry to shows do not apply to 191 Toole shows. 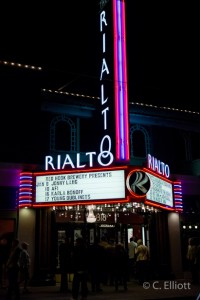 As the Theatre approaches its 100th anniversary in 2020, it now hosts 200 events and draws over 100,000 patrons annually from far and wide who enjoy a wide array of live entertainment in the Rialto’s historic setting. The Rialto Theatre Foundation, with the help of its committed members and community supporters, remains dedicated to the stewardship and preservation of the historic theatre and to continuing to offer a broad range of high-quality performing arts that are reflective of the diverse and vibrant community it serves. The Rialto Theatre Foundaton also owns and operates 191 Toole, which is a  500 capacity all ages venue also set in downtown Tucson.

A 16-story hotel development coming to downtown Tucson will tower over the Rialto Theatre, temporarily displacing the nearly 100-year-old performance and concert venue.  Element Hotel and Moxy Hotel, which are both Marriott brands, will share a new building on the south lot of the Rialto Theatre block on the corner of South Fifth Avenue and East Broadway.  The Dabdoub and Stiteler families, who built the AC Marriott, which opened last year across the street, are again teaming up on this $88 million project.  The 16-story building will house both hotels, with 109 rooms in the Moxy, a millennial-focused brand, and 140 rooms in Element, an extended-stay hotel for business travelers.  During construction, which is expected to begin next year and last about two years, the Rialto Theatre will move to the historic Corbett Building on South Sixth Avenue and East Seventh Street.  Improvements to the existing theatre will include increased seating and viewing capacity; new concessions, dressing and green rooms; and bus parking. 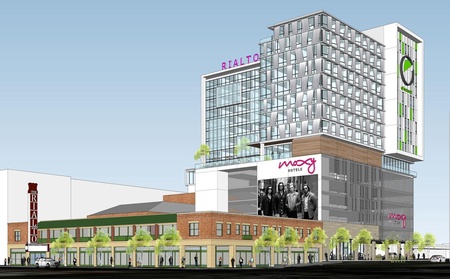