The first Historical Landmark Designated to the City Of Tucson 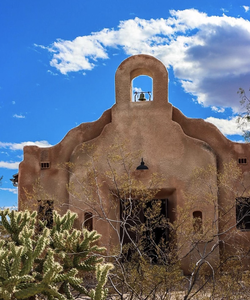 In the mid-1800’s families from small towns in Sonora, Mexico started moving to Tucson, Arizona. In the beginning, these Sonora families would find shelter in buildings of the dismantled Fort Lowell an old military post. But by the turn of the century, the small community was expanding and growing to include about fifteen families, and the members of this community started buying land to build small homes. This led to the development of a small community called the Village of El Fuerte which is known today as Tucson’s Old Fort Lowell Neighborhood. The Hispanic village members continued on to build a cemetery, store, school, and a church in addition to the houses.

The San Pedro Chapel that exists today, was built in 1931 and dedicated in 1932. This chapel was built over the ruins of an older church, Santo Angel de la Guarda which was demolished at the hands of a tornado in 1929 (San Pedro Chapel, n.d). The newer San Pedro Chapel was designed, constructed and completed by the Hispanic residents in the El Fuerte community who supplied their labor. The building is made of adobe that the village members made on site. 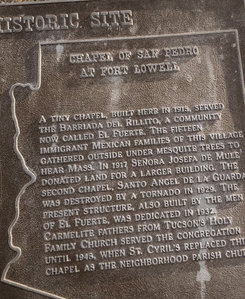 The chapel was the peak of a fifteen-year development process by the Hispanic inhabitants of the Village of El Fuerte to create buildings to be of service to their spiritual needs (Spicer, 1981). It was used for various different spiritual practices including catechism classes, choir meetings for young girls, and mass Sunday’s. El Fuerte had been a steppingstone, a means for Mexican immigrants to move up the economic ladder in America and they were able to create a robust life for themselves thriving and growing as they constructed their community together.

The San Pedro Chapel served the El Fuerte people for religious purposes until 1948 when it was moved to the new parish church close by. The owners changed hands various times over the next few decades. In 1961, the new owner converted the building into a home with the addition of a bathroom, storeroom, kitchen, living room, and a temporary small pool or fishpond. The owners changed hands again a few years later to David Gabaldon an artisan who turned the chapel into a site for art exhibits, weddings, and other events. 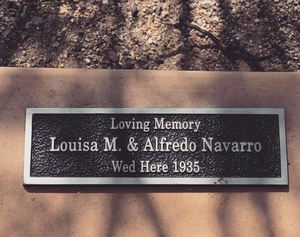 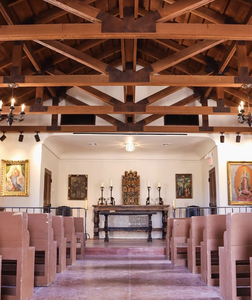 The hill upon which the chapel sits perched was at one time the heart of El Fuerte and the main façade faces north. The chapel itself is a Mission Revival Style and has had very few changes made to it since its creation in 1931. Its architectural design looks very similar to that of various other Catholic mission churches constructed in Tucson during the early 20th century. Given that it was created in 1931, this makes the chapel architecturally significant as an example of a late-stage Mission Revival design in a religious structure. The San Pedro Chapel is a forthright, but humble and modest, stylistic offspring of the missions built on the northern border of New Spain before Mexico gained independence (Spicer, 1981). The primary Mission Revival Style feature of this historical landmark is the curvilinear parapet which surges over the entrance and is surmounted by an uncomplicated arched bell tower (Spicer, 1981). The chapel epitomizes the classic sense of place reminiscent of rural agrarian communities that have since disappeared from Tucson as a result of the infringement of the urban spread and development.

In addition, even though the chapel was owned by a religious institution and used for religious practices its qualified as a historically significant site because of its primary importance as the only public building historically linked to the Hispanic community of El Fuerte. The building was the religious and community center for the Village of El Fuerte during the first half of the twentieth century. It is a piece of living history and is completely restored to offer all the charm and nostalgia of a historic building. 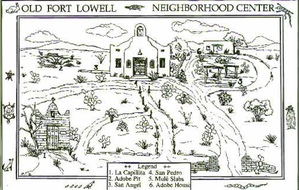 In 1982 the San Pedro Chapel was made the first City of Tucson Landmark. In 1993, the Old Fort Lowell Neighborhood Association, Inc. bought the Chapel after David Gabaldon’s death. During the same year the chapel’s importance was acknowledged and accepted by both the State and National Registers of Historic Places. In 2004, the Old Fort Lowell Neighborhood Association started a historic preservation process to reinstate this element of Tucson’s wonder and beauty.

Although no longer in use for regular worship services, the San Pedro Chapel services many events including weddings, neighborhood gatherings, historic lectures, parties, memorials, and art exhibits. It has been restored and offers all the charm and nostalgia of a historic building but with modern amenities making it perfect for special events.

I personally, visited the San Pedro Chapel on Sunday, February 21, 2021 and enjoyed my visit immensely. Truthfully, I told the owners I was interested in renting the Chapel for an event, so I was able to get a full tour. I was in awe at how beautiful the Chapel looks situated on the hill overlooking the Catalina Mountains. It was a very serene setting surrounded by so much history and antiquity, completely unlike anything I had ever seen before. There is a lot that we can learn from the development and success of the San Pedro Chapel and the Village of El Fuerte that can be applied to how we function and further our communities and the general American public. I was inspired by how the Tucson community today utilizes the chapel for a number of events in the same way the small Hispanic community did when they used it nearly a century ago. It really resonated with me that the foundation of the San Pedro Chapel was built upon the principles of community driven ethos because I strongly believe our modern-day country needs a mindset shift to be more community driven as opposed to individualistic to achieve our goals.

The San Pedro Chapel is a remarkable Historical Landmark located in Tucson, Arizona. The property is associated with events that have made a significant contribution to the broad patterns of our history and the property embodies the distinctive characteristics of a period of time and a group of people. Especially as it pertains to Hispanic social, political, economic, and cultural development in the Village of El Fuerte. 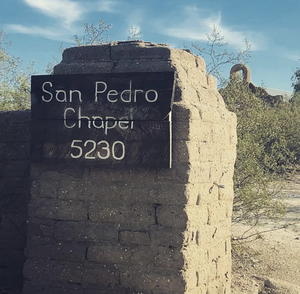