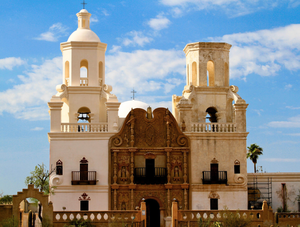 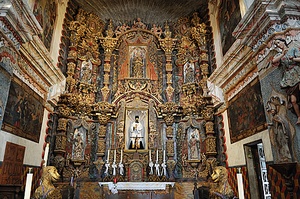 If you travel just 9 miles south of Tucson on I-19 you cannot miss the beauty of the Mission San Xavier del Bac. Known as "The White Dove of the Desert," the Catholic mission was founded by Father Eusebio Kino in 1692, making it older than Tucson itself. But it was not built until the beginning of the 1700’s as Father Kino begins the foundations. He was able to establish his foundations before his passing in 1711. This then led Father Espinosa to construct the first church in 1756. However, it was not until 1783 where the present structure of the church was started by Franciscan missionary FR. Juan Bautista Velderrain. It was brought to fruition after receiving funds from an unnamed Sonoran Rancher. Father Juan involved Ignacio Gaona and his workforce to start the present church.

Before becoming a part of the United states in 1854 by the Gadsden Purchase, the church was a part of Mexico in 1821. And later became part of the Diocese of Sante Fe in 1859. Tucson was finally an incipient diocese in 1866 and services were finally held again.

In 1872 the Sisters of St. Joseph of Carondelet were able to open a school connect to the Mission. After such events the Franciscans returned to the Mission in 1913. Ever since then the Mission has become a separate non-profit entity as a testament to the culture, representing its history.

The mission sits within the boundaries of the San Xavier Indian Reservation. The construction of the white adobe structure that stands today was completed in 1797 and is the oldest European structure standing in Arizona. Unlike other Spanish missions in the area, which include Piman influence in the architecture, San Xavier is entirely European in its design. It is widely considered to be the best example of Spanish Colonial architecture in the United States. One interesting aspect of the architecture is the carving above the doors which show a cat threatening a mouse. There is a legend that says if the cat ever catches the mouse it will be the end of the earth. Roughly 200,000 visitors come each year to visit this National Historic landmark from across the world to visit what is considered to be the finest example of Spanish Colonial architecture in the United States.

An earthquake damaged the church by knocking down a mortuary wall leading to extensive repairs in 1905. In 1939, lightning struck and destroyed the 18th century lantern atop the west tower. It was rebuilt out of common house brick and mortar and rebuilt again in 2007 using threaded fiberglass. Fiberglass helped reinforce rodding in the minitower legs so that metal rods would no longer attract lighting. The east tower was never completed because the builders ran out of money to finish. They church is still unfinished and has left great space for people to figure out and create their own answers as to why it was never finished. There are many stories that have been told and retold but there is no documentary evidence for any of them. Here are some examples:

The Missions school is dedicated to providing knowledge that also pertains to catholic community and its faith. It is the first Catholic school in Arizona as it opened in November 1864. It was established and first opened by Vincent under the guidance of Bishop Salpointe. As mentioned above the Sisters served in this school from 1873 to 1932 until the Immaculate Heart Sisters continued service. Starting in 1938 the Sisters of St. Joseph of Orange ran the school until 1940. Later resulting in the Franciscan Sisters of Christian Charity of Manitowoc, WI. They have achieved in expanding the school to grade 8 and still continue to serve the school this present day. 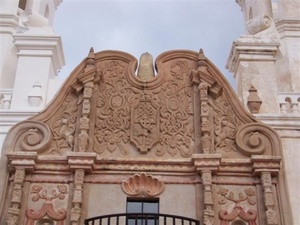 Spanish missions were established frequently as European colonization moved north from Mexico into what is now Arizona. This was an effort by New Spain to extend Christianity and the Spanish culture to the Native Peoples already living in the area. In the case of San Xavier the Pima-speaking people living in this valley were, and are still, known as the Tohono O'odham (T.O.) people. During the construction of the mission, most of the labor needed to build the adobe structure was performed by T.O. men. A private catholic school serving primarily Native American students has been present on the premises since The Sisters of Carondelet opened one there in 1872. 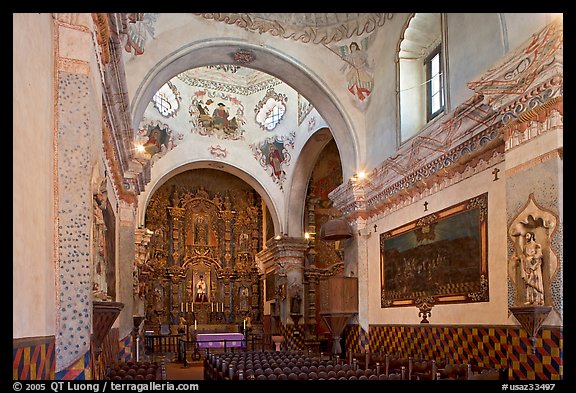 The Mission is constructed of low-fire brick, stone and lime mortar by the architect Ignacio Gaona. Ignacio has also created and built another church in Caborca, Sonora Mexico. The entire structure is roofed with masonry vaults, making it very unique among Spanish Colonial buildings. The style of the church is very distinct and would be described as Baroque. This style features a playful, dramatic element such as theatrical curtain displays, faux doors, marbling and overall sense of balance. The church contains numerous references to the Franciscan cord both on the facade and throughout the church. There is a shell as a symbol of pilgrimage after the patron saint of Spain, Santiago or James the Greater, is replicated all through the structure in window treatments, the sanctuary, the facade and other fascinating details within the interior. 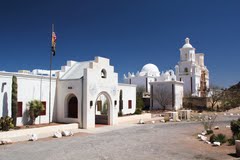 The upkeep of such an old and beautiful church takes a lot of work. There is an organization that is dedicated to the conservation of San Xavier Mission, they are known as the Patronato San Xavier. If you would like to learn more about their work or to donate you can visit their website www.patronatosanxavier.org.

Over the years, Patronato San Xavier has raised more than $11 million for preservation and restoration work at the mission, including a multi-year project to restore the alter area and interior artwork. The Patronato is trying to raise more money currently to restore the East- tower.

The church still holds mass at multiple times throughout the week for their primarily Tohono O'odham congregation. The mission is open to visitors daily from 7:00am to 5:00pm (closed during services). They provide free docent tours Monday - Saturday mornings when the  church is not in use. There is also a museum on site that is open from 8:00am to 4:30pm and a gift shop open from 8:00am to 5:00pm daily. There are candle lightings that the church provides as well, lighting a candle represents someones intention/prayers to God when lit. Candles can be purchased at the gift shop for $3.00 currently. Admission to San Xavier Mission and the museum are always free. For more information you can visit their website at www.sanxaviermission.org.

As of May 25, 2020 the San Xavier Mission has remained closed due to health concerns, the parking lot surrounding the mission has now been closed off as well and will remain closed until further notice.