Founded in 1692 by Father Eusebio Kino, the San Xavier Del Bac Mission stands as a historical landmark just 10 miles south of downtown Tucson, Arizona.  Father Kino was born in Segno, Val di Non di Trento, in Northern Italy, in the Tyrolean Alps on August 10, 1645.  By January of 1691, arrived in what is now the state of Arizona. Then in 1692 he visited a small village land, then known as the O'odham village of Bac, in 1692. He named the land San Xavier and it had about 800 inhabi­tants. The O'odham people, formerly known as the Papago people, a Piman speaking, semi-sedentary farmers and gatherers, lived along the Santa Cruz River while tending their irrigated crops of corn, beans, and squash. The Spanish added wheat and more varieties of beans.

In 1697 Kino revolutionized their economy by introducing cattle and horses at Bac. Around this time some of the children had been baptized, and the people had built a house for the promised resident priest. Finally in April 1700, Kino returned to Bac and began the foundations for the first church of San Xavier del Bac. He wanted to be the resident priest and eventually obtained his superiors' permission. Unfortunately, he could not find anyone to relieve him of his post at Dolores, so he was never able to take up his desired residency. He died in 1711 and was buried at MissionDolores at Magdalena, Sonora.

The cattle and horses at Bac attracted the attention of the Apaches, the tra­ditional plunderers of the farmer Indians of the southwest, and Bac was subject to regular raids, but the Spanish provided no protection for the converts, let alone provide a resident priest for the church. In 1701 Father Francisco Gonzalvo became the first resident priest at Bac. However he only stayed a year and the church was left without a resident priest more often than not. By 1737, the gifts given to the mission by the King of Spain were in bad shape. Then things took a turn for the worse during the Pima Rebellion of 1751. Father Franz Bauer, the resident priest at the time, had to flee south for his life, returning only in 1754 after the Pima had been subdued. It is likely that what remained of Kino's church was destroyed during the revolution. Father Alonso Espinosa who arrived at the mission in 1756 constructed a new church, probably the second there. It was described in 1772 as being "of medium capacity, adorned with two side chapels with paintings in gilded frames." This church was just west of the present church; its foundations were discovered in 1958 by Bernard L. Fontana and William Robinson of the University of Arizona. Father Espinosa also ordered "a head and hands of San Xavier with a body frame resembling the statue in Vera Cruz" from Mexico City in 1763, in all likelihood, the same statue that stands in cassock and surplice above the main altar in the present church. The village had around 220 inhabitants then.

Shortly thereafter Charles III expelled the Jesuits from the Spanish empire, and the Franciscan order took over the operation of the Spanish frontier missions. The first Franciscan sent to the Bac was Father Francisco Hermenegildo Garces, who arrived June 29, 1768. Garces was more interested in exploration than in residency. During this period Apache plundering were severe, and Garces had to rebuild some of his buildings at the mission. It was during the residency of Father Juan Bautista Velderrain in 1783 that construction began on the present church. He borrowed money from Don Antonio Herreros, a local Sonoran rancher, then began work. Sadly, Father Velderrain died before the construction was completed. Instead, Father Juan Bautista Llorenz saw its completion in 1797. 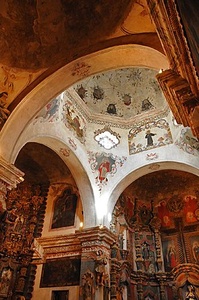 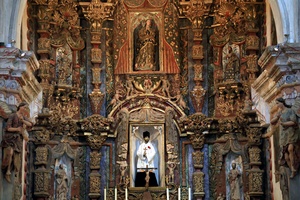 The altar in the church MissionSanXavierdelBac_09.jpg

Who designed the building is unknown. The structure is undoubtedly European. It is dissimilar to some of the New Mexico churches because it is untouched by Indian design except possibly in some of the interior decorations. The materials used in the building are the traditional adobe bricks of the southwest, and Indian labor must have been used in construction. But the laying up of the vaults was almost certainly beyond the scope of the local Indian crafts­ men and must have been done by imported laborers. Most of the interior decoration and the design and carving of the reredos (an ornamental screen covering the wall at the back of an altar) was also beyond the local Indians. No names can be established with certainty about who the designer is. Local folk wisdom credits the Gaona brothers of Caborca, Mexico. But this is uncertain, since it is based on the resemblance between the San Xavier church and the Mission Nuestra Senora de la Purissima Concepcion del Caborca--which they are supposedly designed and built at the same time. The evidence for the Gaona brothers having built either church is not convincing, and the Caborca church was not contemporary with San Xavier. 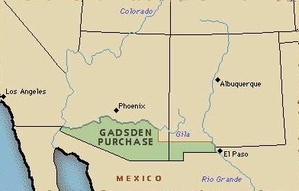 After the Mexican War (1846-1848), San Xavier del Bac was south of the Gila River boundary marked out for the Mexican cession by the Treaty of Guadalupe Hidalgo and so it re­ mained in Mexico. All this was changed in 1853 by the Gadsden Purchase. In 1859 the Catholic Church placed the purchased area in the  diocese of Santa Fe under Bishop Lamy and the church roof was repaired, protecting it from the certain destruction common to exposed adobe brick. Not until 1864 did the Bishop manage to provide a Jesuit pastor, Father Carolus Evasius Messea, for the flock at San Xavier del Bac. By this time the U.S. Bureau of Indian Affairs had taken notice of the O'odham people at San Xavier Del Bac. Resident agents came and went--the first being M. 0. Davidson in 1864. Father Messea stayed only from January to August of 1864 but in that time he founded the first public school in Arizona and saw it close after a few months because of a lack of funds and because the Indians would not attend.

The Earthquake and Restoration of the Church

An earthquake in 1887 knocked down the mortuary wall and damaged parts of the church. Extensive repairs began in 1905, under Bishop Henry Granjon. The next round of restoration followed the years after 1939 when a lightning strike hit the West Tower lantern. A group of community leaders formed the Patronanto San Xavier in 1978 to promote the conservation of Mission San Xavier. Shortly after a comprehensive study of its condition was completed, water seeped into the west wall of the church's sanctuary, forcing an emergency conservation effort by the Patronato. In a five-year program, an international team of conservators cleaned, removed over-painting, and repaired the interior painted and sculptured art of Mission San Xavier del Bac.

The Patronato continues exterior preservation work begun in 1999. Its restoration team is removing the earlier coating of cement plaster, repairing the historic brick beneath, and re-finishing the exterior surface with a traditional lime plaster. The sooner the cement can be removed, the greater the amount of original fabric can be preserved.

San Xavier Del Bac, also known as the White Dove of the Desert, stands as a National Historic Landmark in the state of Arizona, just about 10 miles south of the center of city of Tucson.  A fully functioning Catholic Mission, mass is held daily (Monday through Friday) at 6:30 am local time, and Saturday Vigil at 5:30 pm and Sunday at 8:00 am, 11:00 am, and 12:30 pm, all local time.  The mass schedule changes for Summer with Sunday masses beginning 1 hour earlier beginning June 1 and ending October 1.

The Mission San Xavier is a Catholic Church, but it sits in the Native American village of Wa:k, or otherwise known as Bac in Spanish.  This is part of the Tohono O’odham tribal land.  Part of Father Kino’s work at the mission was not only to bring Christianity to the Native American tribes, he also introduced European technology and knowledge.  Another ideology introduced to the native people was one of pacifism, parity, and equitable holdings.  Previously known as the Papago people, the Tohono O’odham tribe officially changed their name in the 1980s where their name means “Desert People” in the O’odham language.  It is believed the tribe is closely related to the Pima Tribe with likely ties to the prehistoric Hohokam Culture.

Part of the mission was the farming of the O’odham people.  Cash crops such as corn, beans, squash, among others were grown.  Aside from their farming ability were the skills of basket weaving.  In more primitive times, baskets were weaved for use as food storage, means to strain liquids, and as holders of a myriad of items.  Currently, the works of these baskets have earned the designation of art due to their intricate patterns and designs. 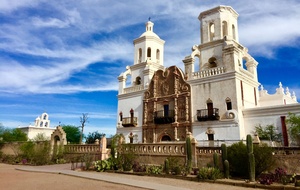 Along with holding daily masses and masses of special occasions, the church maintains a museum and gift shop.  The museum utilizes historical artifacts to assist with the narrative of the tale of the Mission San Xavier Del Bac.  To experience the museum fully, it is suggested one view the 20-minute video which covers the history of the Mission and the efforts put forth in its restoration.  There is no charge to visit the museum and it is open to the public.  Donations are accepted and appreciated in support of maintaining the museum for others to enjoy.  The hours for the museum at 8:00 am to 4:30 pm daily, local time.  The museum is closed on Thanksgiving Day, Christmas, and Easter.

The mission gift shop provides items to commemorate one’s visit to the Mission San Xavier Del Bac.  Items vary from shirts to authentic baskets made by members of the Tohono O’odham tribe.  The gift shop hours are 8:00 am to 5:00 pm daily, local time, and may vary during holiday periods.  Also found in the mission gift shop are candles for sale.  One may also find the candles for sale in the museum foyer.  Parishioners and visitors light candles alike as a representation of an intention and/or prayer to God.  The candles are left in the church as an offering for the prayers sent to God.

As a three-hundred-year-old mission, San Xavier Del Bac is in need of constant repair.  An earthquake in the late 1880s, a lightning strike in the late 1930s, among general wear and tear have caused multiple repairs upon the mission.  In 1978, community leaders formed the Patronanto San Xavier who work to promote conservancy and guardianship of the mission to have it maintained in its original glory.

The mission of San Xavier del Bac is the most spectacular remnant of the Spanish mission system in United States territory. It is almost miraculous that this church has survived the vicissitudes of time. So many others, built of the same desert materials, have melted before the onslaughts of time, weather, and vandalism. What saved it was the dedication of the O'odham people and the interest of others captured by its improbable beauty. The mission is a functioning parish church, but it is open to visitors during daylight hour and admission is free.