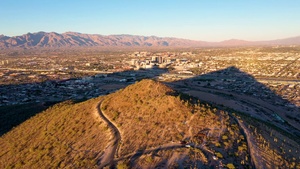 Sentinel Peak Park or “A Mountain” is a regional park made up of almost 373 acres. (1), located in Tucson. This Historic Site, offers both biking and hiking trails, this site also offers great scenery of Tucson and it's surrounding area. This site is important to the local history for many reasons, such as historic uses in wars and battles as well as a place which helped create Tucson and forever a part of history. The "A" on the side on the mountain represents the University of Arizona being here in Tucson. The "A" can also represents many different messages for both historic events and people, as well as be a stance for protest. 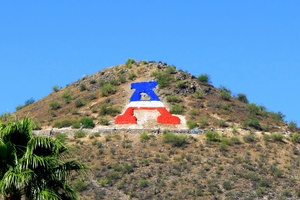 “A Mountain” is another name that locals call the park, as their is a big A reprinting the University of Arizona in Tucson.  In 1913, on a Thanksgiving Day after U of A had just played Pomona College, they had relied that they have put a large “P” on their hillside. One star football player suggested that the civil engineering class design a large “A” on the mountain we now class “A mountain”. It took almost two years to complete. The “A” is made up of rocks that where cemented together. The “A” is 70 feet wide, 160 feet long, and almost 5 feet thick. On October 23rd, of 1915 after a U of A win against Cal Poly Pomona fans went to go paint the "A" white. Every year on St, Patty day the “A” is painted green, this is a tradition that was born in 1993. The A is now used to show respect and appreciation for people and certain events, as well as communicate messages . In 2001, after the 9/11 attacks the mountain was painted red, white, and blue. In 2003, the A was painted black to protest the invasion of Iraq. It was later painted red, white, and blue for troops overseas. In 2018, the A was painted red for support of the “Red for Ed” movement which fought for higher pay wages for Arizona teachers. Finally, in 2020 the “A” was painted blue in support of the healthcare workers during the Covid-19 pandemic. The Blue Key National Honorary partnered with Tucson’s community, sponsors “A Day”. On this day freshman are driven up to the top of the mountain to paint the “A” before the U of A home game. (2). Homecoming, is kicked off, with a ceremonial lighting of the "A", by both students and alumni. (3). 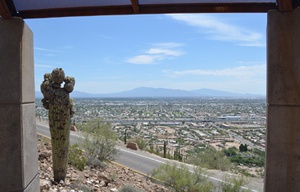 The igneous rock that makes up “A Mountain” represents different volcanic activity, although this mountain is technically not a volcano. (3). There are many reasons why this site is important to Tucson and it’s history. One reason is that the Native Americans used to use Sentinel Peak as a look out for single fires in the late 1600’s. (3). In addition the “A” located on the mountain represents the University of Arizona here in Tucson. The first settlers in this areas built crops along the Santa Cruz River which is located at the base of the mountain. This is very significant, to Tucson’s history as the Santa Cruz River is considered Tucson’s birth place. (3). The mountain located in Sentinel Peak Park also served sentry stations to soldiers in the Civil War. (2). 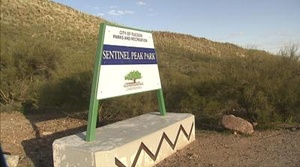 This historic location in Tucson has a few different names that locals refer to it as. The site got it's name from one of it's historic uses back during the Civil War. The name "Sentinel Peak" comes from the idea that this mountain or hillside, was used as a sentinel station to be able to view when enemies are approaching. Another name that this site used to be called was "Picacho Del Centinela", it's Spanish name. Because Warners Mill was located at the base of the mountain some also referred to it as "Warners Mountain". In addition the mountain would sometimes also be called "Chuk Son", it's Papago name which is referring to village, which was previously located at it's base.  Lastly, there is one name which is the most popular today among Tucson locals, which is "A Mountain". This name comes from the idea that students annually white wash the "A" located on the side of the mountain, as well as the idea that this A is a landmark or image of the University of Arizona. In addition to being the most popular name, this is also the most modern name that has been given to this wonderful historic site. (2).

Overall, Sentinel Peak Park is a very historic and important site to the city of Tucson and it's residents, and represents more than just a physical site for people to see and travel to, but it represents generations of people who have used the mountain in different ways, throughout history. It also has to do with the development of Tucson as the Santa Cruz River is located at the base of the mountain. This site is also important as it is involved in many protests as a voice and is used as a memorial site at times for people who have been involved in tragic events. Sentinel Peak Park, has been useful and a great place for many citizens of Tucson for many years and will continue to be in years to come.