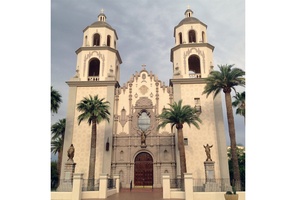 “The Catholic Community of St. Augustine Cathedral, nourished by the Eucharist and guided by the Holy Spirit, is sent forth to proclaim the Good News of God's love for all people.

As a Parish Community, we will put this into action by continuously developing a Pastoral Program that reaches out to meet the needs of our Parishioners and community.”

The St. Augustine Cathedral is located at 192 South Stone Avenue, Tucson, Arizona. This historical site is not only the mother church of the Roman Catholic Diocese of Tucson, but is also characterized by its stunning architecture both inside and outside of the church. Established in 1858, the St. Augustine Cathedral has been popular amongst Catholic parishioners for hundreds of years. In addition to their masses that occur both on the weekends and during the weekdays, there are also a number of other activities for members including volunteer opportunities, marriages, first communions, and much more.

Built in 1858, the St. Augustine Cathedral first began as a small two-room house in Tucson, Arizona. In that same year, the Most Reverend John Lamy, the Bishop of the Diocese of Santa Fe, New Mexico, sent Reverend Joseph Machebeuf to Arizona in order to evaluate the conditions of the newly established St. Augustine Cathedral. Following his visit and evaluation, Rev. Joseph Machebeuf reported to the bishop that there were currently around 600 individuals residing in the town of Tucson, Arizona, and that there should be a pastor appointed for the surrounding area. 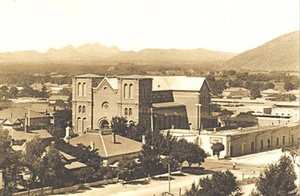 Being that the St. Augustine Cathedral was only a small two-room house at the time, once Reverend Jean B. Salpointe was appointed as a pastor in 1866, work soon began in order to build the Cathedral, although it took two whole years to complete. As the city of Tucson began to expand, it now also had a Church for its population.

Fast forward to 1966, 100 years after Reverend Jean B. Salpointe became the Bishop, time took a toll on the St. Augustine Cathedral. During the time in which the Diocese was growing, the parish put their focus on lending a hand to the other parishes throughout areas in Arizona instead of maintaining good up keep on their own Cathedral, and it eventually became unsafe for its own worshippers. During the 100th anniversary of the original Church’s completion, the St. Augustine Cathedral was restored in order to become safe for its parishioners again.

The transformation of this simple Cathedral came from Bishop Daniel Gercke. Gercke created a beautiful Mexican baroque-style Cathedral, which includes the cast stone facade that was inspired by the Cathedral of Querétaro, Mexico. Although both the facade and towers stayed standing, the St. Augustine Cathedral was rebuilt in the late 1960s due to the fact that it became unsafe for parishioners and restoration was necessary. 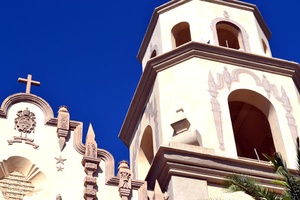 In order to make members feel a part of the St. Augustine Cathedral Community, the opportunity to volunteer is available at the Church. Members are able to not only become familiar with other members and staff of the Church, but also have the chance to serve the Lord. These ministry positions vary, and can include sacraments, adult bible study, cathedral choir, and much more.

St. Augustine Cathedral also has education provided to their younger community. A high school with the same name was opened as a catholic college prep school. This vision had been there for years but took a bit longer to make happen. In 1979 the Diocesan Superintendent of Catholic Schools, Sr. Mary Norbert Long. proposed that a Catholic school was needed on the East side of town. They tried to make this possible for year but never did. Until, Bishop Manuel Moreno appointed a board of directors in 2001 to open St. Augustine Catholic High School. In 2003, St Augustine opened its doors and welcomes their first freshman class.

The St. Augustine Cathedral offers a number of sacraments for Catholic individuals including baptisms, marriage, and Adult Sacraments and the Rite of Christian Initiation of Adults (RCIA)

Baptisms: The first step in becoming a committed Catholic is the Sacrament of Baptism. Baptism can occur at an infant stage or an adult stage and is the initial step in the embracement of God.

Eucharist (First Holy Communion): Eucharist is the receiving of the Body and Blood of Christ. During Eucharist, parishioners are brought closer to god and are given a sacrifice and a meal.

Reconciliation: Reconciliation has three elements; conversion, confession, and celebration. During this time of reconciliation, individuals are seeking God’s forgiveness, and in turn are called to forgive others.

Confirmation: The last step in becoming a initiated Catholic Church member is the Sacrament of Confirmation. Once confirmed, individuals are now a full member of the Catholic community.

Marriage: The time of marriage for Catholics is the time in which one individual completely gives themselves to another person and is a public statement about God and God’s values.

Adult Sacraments and the Rite of Christian Initiation of Adults (RCIA): The RCIA assists individuals who may be unbaptized or baptized Christians who are looking to become a part of the Catholic community.