Just south of downtown Tucson is the city of Barrio Viejo, a reminder of the city's Hispanic-and-adobe-past. One of the most eye-catching building in the city is Teatro Carmen. This building opened open May, 20 1915 and was founded by Carmen Soto Vasquez. It opened initially as a Spanish-language venue for concerts and plays until the mid-1920's. Teatro Carmen's opening night on May 20, 1915 featured a performance of "Cerebro y Corazon" by the Mexican playwright Teresa Farias de Isassi. Teatro Carmen was an important cultural and artistic center for Spanish speakers in Tucson and it hosted performers from Spain, Mexico and local areas. After 1922 the theater became a cinema, ballroom, meeting hall, boxing area, garage and an Elks Lodge. And then for nearly half of its life, starting in the 1930's it was, "home to the Pilgrim Rest Elks Lodge #601, a Black Elks club, author John Warnock wrote in the book 'Tucson: A Drama in Time'"2.

It has always been an important thing to try and keep one's culture present wherever they may go. Teatro Carmen did just this, although a couple of miles in any direction will take you to more urbanized Tucson, Teatro Carmen stood its ground and represented all types of theatrical works from Spain to Latin America, becoming a community for people of Hispanic and Latino descent. Unfortunately in 1926 the venue was sold, but this does not mean it was of no use. It was used for a multitude of things such as, "an auto garage, a space for Borderlands Theater, and most recently a workshop and storage warehouse1". Since then not much has been happening at Teatro Carmen, as it is mainly been being used for storage and is not open to the public. Thankfully, the Rollings family, who owns businesses such as, Arizona Territorial Lands LLC and Bacon Industries Inc., have purchased a lot of properties in the Barrio Viejo area to try and save them from urban renewal. The Rollings family have actually recently reached out to another business, Stratford, who they believe can turn this 8,700 square foot property back into a place of cultural entertainment. It will definitely take some times as it will probably need, "near-complete restoration of the building, including the construction of a new stage and fly loft"1. But when it is complete I will not be shocked to see many artists and performers gathering their to perform as it is literally a standing piece of Tucson's history.

When Teatro Carmen initially opens for the first time again the Rollins family plans to sell all the antique items they have gathered there over the years, "This serves as a way of inviting people in with a purpose and the purpose is to see this wonderful place and also (find items) that may be of use to them where they live2". History is a very important part of every city and its great to see people who want to keep it alive. The Rollings family had this same ideology and have not only purchased Teatro Carmen to save it from urban development but many properties in the Barrio Viejo area, "He knew deep down that this was a very important part of the heart of Tucson and to have any more of it demolished than was already demolished by the Tucson Convention Center would be at best a shame2". This is very true in a lot of cases, when old historical buildings are taken down they are soon forgotten completely along with all the memories and purposes it served. While in some cases this is not a bad thing, in the case of Teatro Carmen it would be, as this building was a place for cultural entertainment and connections.

Carmen Soto Vasquez would be delighted to see Teatro Carmen gaining new light again. He opened up this space for his people, for them to be able to go to a place where they can be comfortable sharing and expressing their heritage. As it opens again, Teatro Carmen's roots will breathe once more allowing for people to come together and enjoy all types of arts. And although it initially opened as a cultural center for Spanish and Latin Americans, all the different types of new people visiting will experience the Spanish culture it was founded upon. 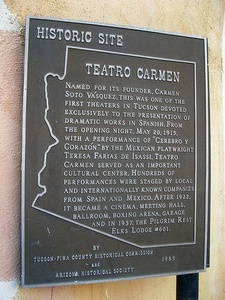 The Teatro Carmen building survived the destruction of the majority of the buildings in the Barrio Viejo during Urban Renewal of the 1950s and 1960s and still stands today at 348 S. Meyer Street. 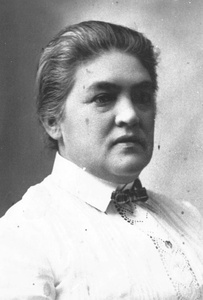