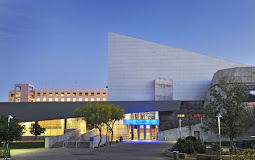 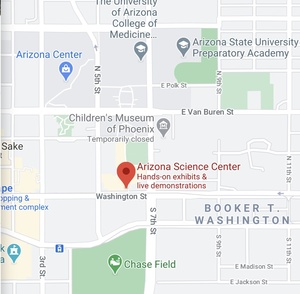 
The Arizona Science Center, or otherwise originally known as The Arizona Museum of Science and Technology, is known for its hands-on exhibits. It is located in Heritage and Science Park at the heart of downtown Phoenix. Originally conceived in 1980 by the Junior League of Phoenix, The Arizona Science Center is still going on strong today (1). Although, it is mostly closed due to the COVID-19 pandemic. Despite this, people can still look up information on the website about its exhibits.

Some of The Arizona Science Center’s exhibits are pretty interesting to look and learn about. Some of these exhibits include the aspects of science from biology and physics, so it is like learning for fun unlike being in an actual class. Some well known names of these exhibits include The Wonder Crew, Forces of Nature, and Solarville. The Forces of Nature exhibit, in particular, looks visually appealing to all visitors. It allows you to experience earthly phenomenons by showing weather patterns and being immersed in a weatherly show (1). Not only does The Arizona Science Center have exhibits, they also participate in the needs in the greater community. They offer an extensive variety of outreach programs, working on-site at schools, and partner organizations throughout the state. Some programs that were impacted include STEM camps, Science on Wheels, and Universe on Wheels. According to their educational outreach programming, it reaches nearly about 60,000 people every year (2).

The Universe on Wheels is considered the state-of-the-art visual learning experiences for a variety of audiences at the Arizona Science Center. It offers a museum-quality planetarium shows that bring the night sky to you at any time of the day. Despite the nightly sky being shown, it is often used indoors. The screen itself is at least 22 feet long by 22 feet wide with a 19 foot ceiling. Its office hours are from 9 a.m. to 4 p.m. from Monday to Friday (1).

The Science on Wheels delivers many engaging science experiences to classrooms and community centers throughout the Arizona state. About over 48,000 students and teachers are impacted by our Science on Wheels programs each year and it continues to be popular. Science on Wheels is just one of the few programs that have changed the dynamics of after-school clubs and classroom activities for many students at school. The program has brought students on a field trip to the solar system with their indoor planetarium. It is considered intriguing to many people due to the advanced technology in a historical building (1).

STEM, or  Science, technology, engineering, and mathematics, is a great program for all students who want to be involved with the Arizona Science Center and its wide range of programs. It is stated that by 2021, Arizona is projected to have a 21% increase in STEM jobs, despite the education system being the lowest in many states in STEM subjects. Studengs who who are exposed to STEM education at a young age are more likely to act on this knowledge in school and outside activities to support their interests. For the Arizona Science Center especially, this could work for many people who want to be involved in science, since most of their exhibits are science related (2) The Arizona Science Center are committed to their mission to inspire and engage  minds through science. The people who work there are here for many families who want educational oppurtunities (1).

The amount of feedback from the Arizona community has made the board and staff of the  Arizona Science Center to think of a strategic plan known as the The 2020 Vision. Throughout the supposed five year plan, this is planning on providing more engaging science experiences for many people abroad. The expansion on this is to promote and build a culture of excellence and to also continue to build upon long-term sustainability. Board, staff, and community members have begun the process of developing a strategic plan for the next five years (2).