The Gamma Epsilon Chapter at the University of Arizona has 139 active members currently, which makes the largest the chapter has ever been. The Fraternity is centralized by the historical house in which the Gamma Epsilon has lived in since its original charter. The colors of Kappa Alpha order include crimson and old gold. The colors represent the blood sacrificed (crimson) and gold spent in the defense of the country during the Civil War. The two flowers include crimson rose and the white magnolia, which represent masculine might and purity. The crest represents the continuing power of the Knight Commander, and the lions represent being cautious and magnanimous.

Located on 906 N 1st Ave, the Kappa Alpha Fraternity house has achieved historical building status with the University of Arizona. The house suffered a fire in 1989 which lead to the complete destruction in the house. Shortly rebuilt, the house was reconstructed to match what was originally there. The historic value of the maintaining historical recognition with the University of Arizona means that graduated brothers can return to the house and relive their experiences during their time at school. The house remains a stable to the fraternity and the brothers are very proud of the house. The current members of the house value and cherish previous brothers by proudly displaying past composite pictures so the brothers can be reminded that they are apart of something bigger than themselves. The Kappa Alpha Order lost their charter in 2007 at the University and returned on campus in 2011. Due to the importance of their house, Nations of Kappa Alpha Order wanted to buy it back from the local housing corporation. Since the return of the Kappa Alpha Order, the Fraternity has been in great standing with the University of Arizona. 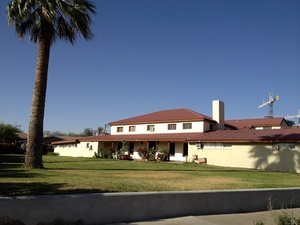 Recruitment is taken very seriously by the brothers of The Kappa Alpha order. Recruitment is held once a semester at the University of Arizona. Each pledge class will usually comprise of 20-25 new members. Rush week is spent by the brothers working diligently on finding a great group of young men that still have their values and beliefs intact.

The house has 16 rooms, housing roughly 30 to 35 brothers. The house is split up into two floors – a living room, north and south hallways, a mess hall, a communal area, two bathrooms, and a chapter room. The house has gone many renovations to be up to date, including a new main room, bathroom upgrades, remodeling of the entire backyard, but the house stays true to its history. Typically, the brothers of the Kappa Alpha Order can always be found at the house doing homework, eating, or socializing. The house is built on half an acre, featuring a large front yard where social events or philanthropies have been held in the past. The backyard features a full-size basketball court allowing for the creation of the Kappa Alpha Basketball Association, a in-house basketball league for the brothers to play in.

Inside the house the brothers have established a room with the sole purpose of showcasing the history of the Kappa Alpha Order nationally as well as the chapter’s history at the University of Arizona. This is also where awards and trophies are displayed. For the past two years the Kappa Alpha Order has hosted the Evan Spear Memorial Golf Tournament which honors a brother that has passed. The proceeds from the golf tournament go to the Spear foundation. The Evan Spear Foundation raises awareness and educates the public on the importance of organ and tissue donation. In 2017, more than 70 people participated in the golf tournament located in Tucson. Past awards given to brothers include Ammen Court of Honor and President of the year. The chapter has been recognized by Nations for Chapter excellency.