The Loft Cinema is a nonprofit community based movie theater located in Tucson Arizona. The Loft is not the typical movie theater, it is a community driven project that focuses its efforts on celebrating the art and diversity of films. They have been voted Best of Tucson every year since 2003 by the readers of the Tucson Weekly. The Loft Cinema screens many diverse films that spreads to a wide audience.  The theater does not include a line up of films that most big movie theater companies play, such as AMC and Cinemark Theaters. Their line up of films include old and new films that are either independent or foreign. As well as documentaries, classic art films, and they hold local events that screen community films and student made films. The Loft also held many interactive events that included The Rocky Horror Picture Show, sing-a-longs, and cult favorites. The Loft is also known for the Q&A meetings that they have hosted with various directors and filmmakers. In the case of smaller directors, The Loft has also had screenings of the directors film and then afterwards has a discussion session between the audience and the director. In the case of larger names The Loft has had several hosted discussion panels with influential individuals of the industry.

The Loft Cinema has received numerous awards for their contributions to both the local community of Tucson and their contributions to the cinema culture of the city. The Loft has been given several Lumie awards by the Tucson Pima Arts Council, including a Lumie for Emerging Art Organization and a Lumie for Best Established Arts Organization. The Loft is a organization that has focused on celebrating the diversity of the community for the long time that it has operated in Tucson. The Loft has been a place of screening LGBT films that are not featured at other Tucson theaters. Films like Gen Silent and Laramie Inside Out are films that The Loft screens that many other theaters do not.

The Loft Cinema has become a very prominent feature in Tucson Arizona for individuals to enjoy films and festivals that they won't likely experience in a major movie theater. Their mission there is said to be "Building a community by celebrating the art and diversity of film." With their missions they have turned into a cultural hub for the movie-going community of Tucson. And that has spread to a very wide community that have continued to be supported by their members loyalty to the theater. 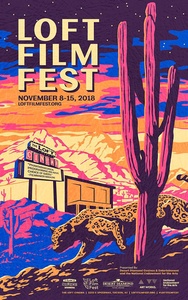 The Loft Cinema has always included many events and festivals continually that aim towards a different agenda that attracts a wide audience. On their website, they include a list of events that they hold under their signature series. This includes Cult Classics, Essential Cinema, First Friday Shorts that are presented by Mother Road Brewing Company, Loft Jr, Loft Kids Festival, Loft Solar Cinema, Loft Staff Selects, Loft Film Festival, Loft Member Screenings, Mondo Mondays, The Rocky Horror Picture Show, and Science on Screen. They also recently included three new events due to the Covid-19 pandemic which are Open Air Cinema, Streaming Releases and virtual showing of the Loft Short Film Festival. These events cater to people's liking while also benefiting the Tucson community. The Loft is also well known for their contributions to the community. With the help of community partners The Loft Cinema is able to host fundraisers, charity events and educational programs at their venue

The Loft contributes to the community and raises awareness about different issues by the performance of the Loft Solar Cinema. Partnered with Technicians for Sustainability, The Loft has outfitted a van with solar panels that power the car as well as the projector that the car holds. The van is used to essentially have a drive-in theater on the go. Any 20 foot wall can be used as a screen and the projector, powered by the solar panels, can screen multiple films back to back. This effort was done to encourage individuals to learn more about solar panels. Solar power, especially in the state of Arizona, is sadly underutilized as a source of renewable energy. This van concept was made with the intention to help educate those who are not aware of how solar panels work. To explain that solar panels can store energy and do not require the sun to be actively on them to work, many of these screenings are done at night time. Just another way that The Loft is attempting to educate and improve the community while entertaining its audience too.

Another example is the children's film festival. Much like their standard Loft Film Festival, the children's film festival is a collection of films that are featured throughout the course of a day. The children's festival is a great opportunity for younger audience members to try the festival experience. A really popular event the Loft includes is their variation of a Halloween bine-watching scary movie marathon. This usually lasts until 7pm to 7am the next day. People can dress in costumes or in their pajamas and they offer you Halloween themed snacks and beverages. They usually have this event in their main theater room therefore it gets pretty packed with people but is also a very fun event to experience. 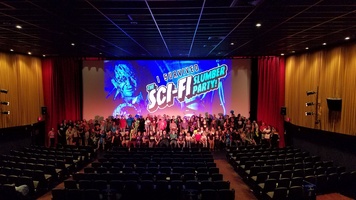 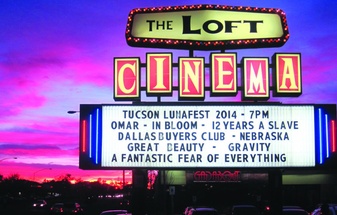 The Loft has a diverse schedule of films. Their goal is to entice all audience members to join the community and become an active member of their cinema culture. This is accomplished by having a variety of movies at the theater. Classics and oldies are featured as well as indie films. Local up and coming directors have had their films shown at The Loft as a premiere viewing as well. The Loft does a really great job by keeping their customers or new customers. updated with certain film festivals, events, movies they will be screening, or when they will be screening student films by students from the University of Arizona. The Loft Cinema interacts with their community and audience mainly through Instagram, Twitter, and Facebook.  They are somewhat active on all their social media platforms. They post about once or twice a day on each of their social media accounts and the information being posted is the same.  This is a very nice feature that the staff does for their customers. Just by ensuring that everyone is not getting confused or reading false information about the theater.

In addition to their community based mission, The Loft provides a chance for young filmmakers to test their work. The Loft hosts a short film contest on a semi-regular basis that allows for participants to submit their own work and possibly have it screened at The Loft. This opportunity is not a common occurrence for film makers in today's society. The chance for young artists to promote and receive criticism is an essential part of supporting the artistic community. They promote these short film contests on all their social media platforms as well as their own website to get as many people involved and for filmmakers to have their work displayed for a wider audience. Again since The Loft Cinema is a non-profit art house, they  also include a list of ways on their website mainly but sometimes on social media, ways to help and support the theater. The list also mentions ways to become a member, where to donate, become a sponsor, and to volunteer. This information also includes contact information, either phone number and email, so anyone who wishes to help knows who to contact and how to help correctly. 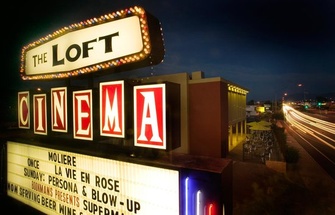 Due to the unfortunate events of the COVID-19 pandemic, The Loft Cinema has taken the hit from it pretty hard. Although they had to shut their doors for a little bit, they came back with a few ways to still have people enjoy their films, events, and festivals but in a social distancing fashion. Through their social media platforms and their website, they have been able to inform their followers about all the new ways in how they are adjusting during this pandemic while still providing for their customers.

One event The Loft has added is the Open Air Cinema. Movies are being screened outside the building with a limited amount of seating, social distancing, and enforcement of masks except for eating and drinking. They also are streaming new film releases through a “digital theater,” where customers purchase a virtual ticket and are able to watch these films from the safety of their own homes. They are also holding a short film festivals that you can purchase an e-ticket for the Open Air Cinema or a virtual screening to see the festival.  As well The Loft is selling roadside concessions on the weekends that are available for safe pickup. They have been asking for donations while still providing safe measures for people who want to enjoy the theater. The loft has adjusted to the pandemic but still remains loyal to their members and their movie experiences. This, along with continuing to promote independent films, is the main focus of their social media accounts right now. 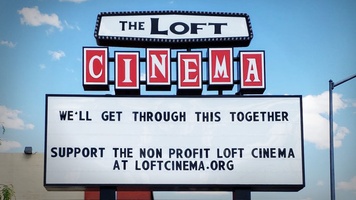 For more information about the The Loft and their current screening schedules visit their website link below.