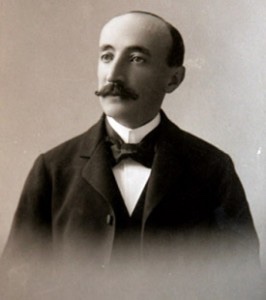 In the 1920s, one of Tucson’s wealthiest men, and owner of The Pioneer Hotel, was  German-born Albert Seinfeld. In 1872, at age 18, Steinfeld came to Tucson via Stagecoach to work in his uncle Louis’ mercantile Zeckendorf’s, a large one-story adobe building situated just west of Calle Real which is now known as Main Avenue. Steinfeld so impressed his uncle with his business acumen that Louis made his nephew partner two years later and changed the store’s name to L. Zeckendorf & Company. After twelve years, Steinfeld set out on his own and although in the decades that followed he amassed extensive mining and banking interests, the core of Steinfeld’s business was in Downtown Tucson—Steinfeld’s Department Store, located at Pennington and Stone Avenue where the Bank of America is located today.

In 1929, when Steinfeld was 75, he and his son Harold built the Pioneer International Hotel on Stone Avenue a few blocks north of their bank, Consolidated National Bank and cater-corner to their department store. At 11 stories, the hotel became Tucson’s tallest building and one of Tucson’s first high rise buildings. The Pioneer Hotel opened in 1929 and became the social center of the downtown business district catering to the city’s social elite; it was the place to be and to be seen. Tucson’s largest Kiwanis and Rotary Clubs met there and the Cleveland Indians  stayed in the hotel during spring training. Shoppers from Phoenix and Sonora flocked to the Pioneer because it was across the street from two of Tucson’s leading department stores: Steinfeld’s and Jacome’s (hawk-ò-may’s) which was located where the Main library is today. Well-known and prominent Americans were guests at the Pioneer including football great Knute Rockne, Liberace, Eleanor Roosevelt, western movie star Tom Mix, President Lyndon Johnson, and cowboy philosopher Will Rogers. Roy Drachman, who was among the pioneers of Tucson, was interviewed in 2000 by the Tucson Citizen recalled the hotel as the best in town where in the summers, dances complete with an orchestra were held on the rooftop garden. The hotel remained popular through 1970 when 35 years after his death, Steinfeld’s son Harold was running the various family businesses including Steinfeld’s Department Store. 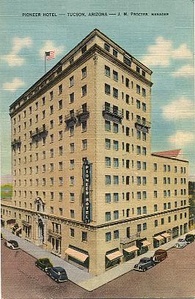 The Spanish Revival hotel was designed by local Tucson architect Roy Place who was the Chief Architect for the University of Arizona from 1924-1940. The hotel displayed ornate stone facades and an atrium as well as boasting the largest ballroom in the United States. Promotional material assured guests that this elegant, modern hotel, which cost about $1million to build, was fire proof. A special newspaper section on the hotel’s opening proclaimed the hotel “A crowning achievement in the annals of Tucson’s civic and commercial growth of the past decade and a harbinger of future unremitting progress.”

At 12:19 am on the morning of December 20, 1970, emergency dispatchers took three calls  reporting a fire at the Pioneer Hotel. Firefighters originally believed the calls to be false alarms until they saw the orange glow across the Downtown skyline. At 12:22 am, three fire engines and two ladder trucks arrived on scene. They called for back up and fifteen minutes later, Tucson’s entire arsenal of fire fighters consisting of 11 engines, four ladders, and five medical rescue trucks totaling 203 firemen were battling the inferno. At the time the first alarm sounded, there were more than 700 people in the hotel including more than 350 people who were attending the Hughes Aircraft Christmas party in the hotel’s large ballroom. Most of the hotel’s guests made it out safely however 29 did not. Among those who were unable to escape are Harold Steinfeld and his wife Margaret  who at the time lived in the hotel’s penthouse on the 11th floor.

The open stairwells acted as chimneys allowing the fire to spread quickly to the upper floors; the carpets, wallpaper, and holiday decorations burned like kindling. Unfortunately, because the fire department did not have ladders tall enough to reach the upper floors, rescuing those guests was impossible. At the time, their ladders at 100 feet could reach only the eighth floor.  As a result, guests fashioned ropes out of sheets and blankets and clambered from the windows with few making out safely. The sidewalks were covered with the crushed bodies of others, who out of desperation through their mattresses from the window hoping they would land on them after jumping from 100 feet in the air. Although many children and elderly burned to death, most died  of carbon monoxide poisoning. Harold and Margaret Steinfeld died of smoke inhalation. Guests of the hotel, bystanders, and employees tried to extinguish the flames while others assisted the firemen with getting the injured onto stretchers and out of the still burning building. One such individual was 16-year-old Louis Taylor.

Taylor was a young black man who had been hovering near the Hughes Christmas party trying to nick some drinks. Fire investigators later determined the fire intentionally set in two places on the hotel’s fourth floor. The police arrested Taylor who they believed purposefully set the fires as a diversion so that he could steal from the guest rooms and the Hughes party. During his trial in Phoenix, which lasted seven weeks, a fire investigator hired by the State of Arizona testified he developed a profile which suggested the arsonist was a young black male while another investigator testified an accelerant had been used in the fire despite lab tests indicating otherwise. Although he maintained his innocence, Taylor who is of mixed race, (Hispanic and African American) was convicted of 28 counts of first-degree murder by an all white jury in 1972 and was sentenced to life in prison. Judge Charles Hardy presided over the trial during a time of racial unrest in Tucson and publicly expressed his doubts about the jury’s decision to convict Taylor. For years following the conviction, Taylor and Judge Hardy maintained contact until Hardy’s death in 2010. At one point, Judge Hardy tried to broker a deal with lawmakers that would commute Taylor’s sentence on the condition he admit guilt; Taylor refused.

In October 2012, attorneys with the Arizona Justice Project asked the court to dismiss the case or hold an evidentiary hearing. The attorneys stated several defense experts, who used modern forensic fire science, would  not have ruled arson as the cause of the fire and alleged prosecutorial misconduct when a lab report indicating accelerants were not used was withheld from Taylor’s defense attorneys. Most recently, a Tucson Fire Department investigator reviewed available evidence and was unable to determine the cause of the fire. In April 2013, after agreeing to a plea of no contest as part of an agreement to set aside the original conviction and receive credit for time served, Louis Taylor, age 59, was set free to begin a new life. 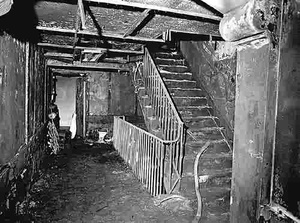 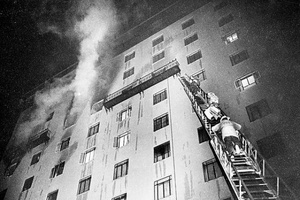 As a result of this tragedy, fire codes in Tucson and in cities throughout the United States were seriously considered and improved. Following the fire at the Pioneer Hotel, any building over four stories high was required to have sprinklers and smoke detectors installed, fire-resistant carpets, and doors on the stair wells.

After the fire, developer Allan Elias converted the building into offices with extensive remodeling and facade work in 1977. John Hancock Mutual Life spent $1.3 million in renovations including hallways and other common areas.

Unfortunately, downtown Tucson would take more than 40 years to recover from this catastrophe. Following the fire at the Pioneer Hotel, the area’s major businesses, including the thriving department stores, moved into the suburbs. As a result, downtown deteriorated and the once elegant buildings became home to dive bars, pornography theaters, or stood vacant. The homeless, alcoholics, addicts, and sex workers displaced the social elite.

The building is currently owned by Holualoa Companies who after partnering with SinfonìaRx, unveiled their year-long effort to restore the Pioneer Hotel dining room on October 25, 2018. Restorations included: restoring the ceiling, restoring walls and balconies including features such as arched insets in walls and curved concrete details along the balcony edges, and metalwork to include new chandeliers and balcony railings to replace the originals that were destroyed or removed in the 1970s. 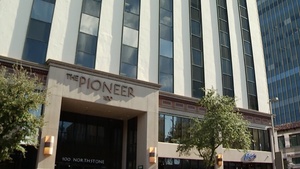