The hustle and bustle of Downtown Tucson can be overwhelming. With over 80 restaurants and bars, numerous shops, and a variety of entertainment venues, a quiet and peaceful afternoon is hard to come by. However, tucked away in the historic El Presidio District of Tucson, lies a hidden gem of the city. Far enough away from the chiming bell of the streetcar, yet close enough to still feel a part of the culture of Downtown can be found The Tucson Museum of Art and Historic Block. This collection of historic buildings provides visitors with a tranquil venue to appreciate the rich history that is the very foundation on which this town is built. 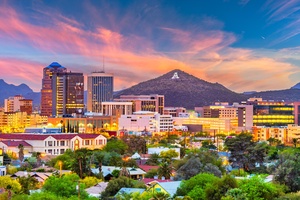 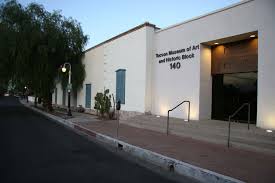 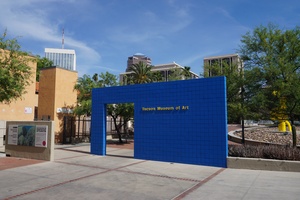 The Tucson Museum of Art (TMA) was first established in the year 1924, under the name Tucson Fine Arts Association, and was located in different places than the current location. In 1975, the museum moved to its current location on North Main Avenue and changed its name to what we know today. TMA is both an art museum and an art education institution for everyone who wants to learn about art. The museum started serving as a community art education venue since its inception in 1924. There are docent organizations and museum staff that help art education continuously be a major function of the museum by carrying out education and outreach programs. The Museum features traveling and permanent exhibitions of Modern and Contemporary, American West, Native American, Latin American, and Asian art. It currently has eight to nine exhibitions.

There were members of the Tucson women’s club and 50 other people from Tucson and also Louise Norton, a member of the Tucson Fine Arts Association (TFAA) which the current Museum founded as when it was first opened. Initially, TFAA used to be used as a gallery and space where people could give lectures. In 1941, exhibitions expanded and TFAA presented Southwestern Oils and featured works and lecture series. In 1947, the city’s first non-juried exhibition of local artists was presented by artists and craftspeople and it drew about 7412 visitors. The craft show was created in 1950 and it became the Arizona Biennial which has been the statewide biennial art exhibition for the longest time in the state. In 1967, the organization which is the current Tucson Museum of Art started a permanent collection with some major donations. The main Museum designed by Andy Anderson who was a principal architect of Tucson architecture was opened in 1975 including loaned works from 43 personal collections of people living in Tucson. The museum drew about 50,000 visitors in the first year and the main galleries have been arranged as an open downward spiral around a “well” at the center. TMA has provided original exhibitions upon local artists, collections, and regional history and currently presents modern traveling exhibitions. In 2015, one of the exhibitions broke the record of the previous attendance with more than 30,000 visitors. 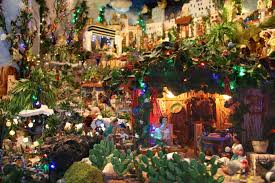 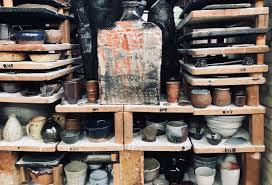 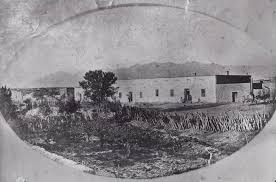 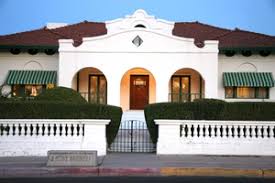 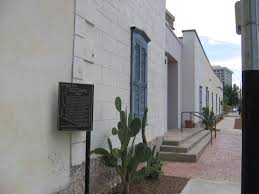 Historic Blocks of the Museum

The museum took on five more properties, all of which have historical significance and interesting stories to tell. These five properties include La Case Cordova, Romero House, Edward Nye Fish House, Stevens/Duffield House, and the J. Knox Corbett House.

The story behind the building of the Edward Nye Fish House is fascinating and paints a really interesting picture of what life in old Tucson was like. The house was built and owned in 1868 by Edward Nye Fish. Fish was originally from Massachusetts, however, he and 20 of his friends sailed a boat all the way to San Francisco in 1849. After becoming wealthy from his time in California, Fish and his family moved to Tucson. Fish bought the property that is now managed by the museum. The house was decorated quite revolutionary for the time, with many pieces within the homecoming from Europe. The house also had wood floors, something that not many had done at this time. The Fish house quickly became the center of the social scene within Tucson. Today, the Fish House is home to an art exhibit showcasing Western Art. While the Fish House’s history is grand, each of these five historic buildings has its own interesting backgrounds. The museum has done a fantastic job of staying true to the integrity of each of these buildings and trying to educate the public on the stories behind the buildings. Each of the buildings showcases the art of its own. Whether showcasing an exhibition or collection, the buildings and their histories are still at the center.

Perhaps the most notable part of the museum is the yellow sculpture outside of one of the side entrances to the museum. It almost acts as a known landmark to locals and an intriguing piece to those who are just visiting Tucson. As you walk past the sculpture and into the main building of the museum, you enter the main gallery area. Some of the galleries and exhibits are a part of the museum’s extensive permanent collection, however, most are showcased temporarily by curators. The current exhibitions include Desert Dweller, Dress Matters: Clothing as Metaphor, American Art, Art of the American West, Contemporary Art, Folk Art of the Americas, Latin American Art, and Modern Art.

The J. Knox Corbett House is a two-story home completed in 1907 to have a Mission Revival or known as a Spanish Mediterranean style which was very popular during that time. The outside of the J Knox Corbett House includes many different architectural designs that suggest the house is of Mission Revival Style. These characteristics include the stucco-covered brick, clay tiled roof, as well as arched porch. The Corbett family resided in the house for 56 years until the 1960s and the house was restored in 1995. The house has been restored to have furniture, ceramics, and other objects which are a reflection of the American Arts and Crafts era of the 1880s to the 1930s. Originally, the house was furnished with mahogany furniture and European imports and has a full basement. In a small attic room, gin was made during the era of prohibition.

La Casa Cordova, the oldest adobe home in downtown Tucson, is listed in the National Register of Historic Places. La Casa Cordova was built within the area enclosed by the Presidio wall. Some historians believe that La Casa’s original rooms may predate the Gadsden Purchase of 1854. This date of construction is based on the oldest portion of the building, the two back rooms on the south side, which appear on the earliest known map of Tucson, the 1862 Major D. Ferguson map.

La Casa Cordova is named for the Cordova family who acquired the building in 1936 and lived in it from 1944 until 1973.

Located in La Casa Cordova, El Nacimiento is the largest and longest-running nativity scene in the southwest. Created in the 1970’s by Maria Luisa Tena, El Nacimiento is a Tucson treasure and a must-see work of art for any season.

The Romero House is located at the northeast corner of the Historic Block. Although it has undergone numerous alterations, part of the building is believed to date from the nineteenth century. It has been maintained not only for its historical significance (its north wall is believed to contain remnants of the original Presidio wall), but also exemplifies the evolution of a home and its occupants.

One of its original residents, Leonardo Romero, was the town carpenter. He became well known for his work on the San Xavier Mission and other important Tucson landmarks. The home continued as a residence for many years but also provided space to various businesses. Physical changes include equipping it with facilities for a restaurant and removing an entire section of the corner for a drive-through gas station. The station later failed and the corner was filled with brick. The house as it stands today is an L-shaped structure. It is impossible to know whether the original was L-shaped or if it was two separate buildings later joined together.

Hiram Stevens first came to Tucson in 1856 and purchased property for a house in April 1865 for $50. He was well known in Tucson and throughout the country for his business acumen and political success in the state legislature as well as local government. It is known that he was once a post trader for the Army, miner, sheep rancher, hotelier, and was twice elected to the U.S. Congress.

His home was one of the grandest in the area. It was located on Calle Real, today’s Main Ave, north of Edward Nye Fish’s home. The house included an aviary, grape arbor, carriage house, and hay barn. He lived on the property with his wife, Petra Santa Cruz. During the course of their marriage, the Stevens entertained in grand style, hosting events as diverse as political parties and town weddings.

Milton B. Duffield, a hot-tempered man, purchased the one-room building adjacent to the Stevens home. He came to Tucson in 1863 as U.S. Marshal in Arizona and served for two years. For a time he was employed as a special postal agent, and in 1870 he became engaged in a heated mining claim. Duffield was shot and killed by the man with whom he was engaged in the property dispute.

Why people visit the Museum

While many who visit the museum are art enthusiasts, the museum does a great job of catering to first-time visitors or visitors who may not have an extensive background. Didactics, or written information about an exhibit, can be found both about each show and about each piece within the shows. These didactics are available in English and Spanish to accommodate a variety of guests. These allow visitors to not only understand the history behind the art but also appreciate what the intended meaning behind the art is. Of course, visitors are encouraged to come to their own conclusions about the meaning as well.

The museum does not just provide the Tucson community with great exhibits and interesting history. The museum also works hard to provide art education to the community as well. The museum works closely with local school districts to provide students whose schools do not offer art classes, a chance to learn about art and make some pieces of their own. This program has been something the museum has done for the past 25 years and has provided thousands of units of art classes to local students, all with the help of volunteers.

Clearly, the Tucson Museum of Art has made a lasting impact on the Tucson community. Not only does It work to preserve the rich history of old Tucson, it also works to showcase amazing art to the community as well. The museum will forever be engrained in the heart of Tucson.

Hours and Policies changed due to COVID 19

The Museum was reopened to the public on July 30, 2020. Due to the pandemic, for safety and enjoyable experiences for visitors, staff, and community members, they have made important changes to their policies and operations. They included limiting capacity, timed tickets, a mandatory mask policy for all staff and visitors, sanitation stations throughout the museum, and social distancing procedures in exhibition galleries. The Tucson Museum and Historic Block is closed on from Monday to Wednesday and open Thursday-Sunday from 10 a.m. to 5 p.m. General admission is $12 for adults, $10 for Seniors, $7 for college students and children 13-17 and free for children 12 and under, veterans and museum members.

Link to Reviews of Museum: https://www.yelp.com/biz/tucson-museum-of-art-tucson