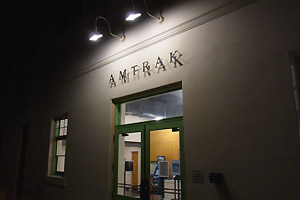 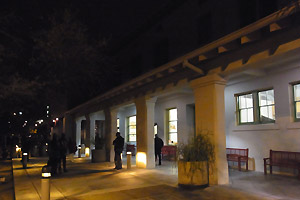 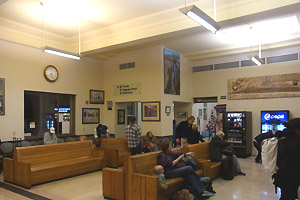 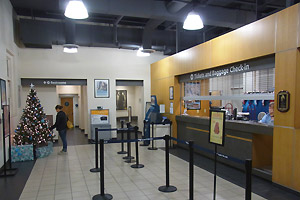 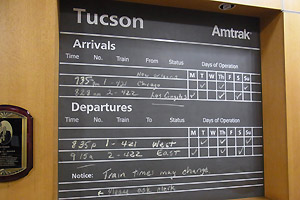 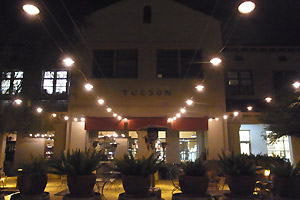 Located at 400 North Toole Avenue, the Tucson Station, commonly referred to as the Amtrak Station of Tucson, was opened in 1907 by the Southern Pacific Railroad. The Southern Pacific was created as a rail line from San Francisco to San Diego. By 1883, this line extended all the way to New Orleans.  Two staff workers, Daniel J. Patterson and J.D. Wallace were the masterminds behind this building design and structure. Built originally with bricks, this structure cost nearly 665,000.  Daniel J. Patterson also had designed the San Antonio Station as well. Since it’s opening, the station has been renovated and sold a number of times. Today, the station is an active Amtrak station staffed by Amtrak employees, has a waiting room, and is served by the trains known as Sunset Limited and Texas Eagle which came three times per week.

Initially, the station encapsulated a middle portion with a red tile roof flanked by two end towers which framed the overall architecture. The windows of each tower displayed complex design in the Churrigueresque style, defined by creative, sculptural detailing. This detailing was commonly correlated with Spanish architecture of the 17th and 18th centuries. Finally, the station had a circular drive which allowed visitors and those in the town to pull up to the front entrance to pick up and drop off whomever.

This station is treated as a historical site because of the deep rail roots it has with the Southern Pacific Railroad. The Southern Pacific Railroad was the second transcontinental railroad running eastbound from California. It reached Tucson in 1880 on March 2nd. Originally a large and wooden building, the depot was replaced by the actual Tucson Station in 1907. It was accommodating for passengers and had offices. With the S.P.R.R. reaching Tucson, economic and business growth began to flourish and allowed Tucson to grow as a city and opened up many transportation and trading opportunities. The Southern Pacific merged with Union Pacific on Sept. 11, 1996.

Nearby the station, there is a notable statue of Wyatt Earp and Doc Holiday. Wyatt Earp and Doc Holiday are two legendary frontiersmen of the American West who were both involved with gunfights and are remembered today as cowboys and gunmen who were both involved in the infamous O.K. Corral which was a shootout that took place in Tombstone, Arizona wherein approximately thirty shots were fired in a total of thirty seconds. In the statue that is featured at the station, the two men are standing close to each other with their guns in hand. This statue is known to commemorate a different shootout, known as the revenge killing of Frank Stilwell. According to historian David Leighton, this statue represents a historical event in which the two men killed Frank as a result of Wyatt’s brother, Morgan Earp’s death. On the day of March 20th 1882, Wyatt Earp, Doc Holiday, and a few other unnamed men were aiding Virgil Earp and his wife near the station. While at the station, Wyatt learned that Frank Stilwell was nearby, so he took the chance to find him , chase him, and eventually kill him because Frank was a suspect in the murder of his brother.

The station itself has undergone countless renovations and ownerships since its opening in 1907. Beginning in 1941, over 30 years after its opening, the South Pacific Railroad made the decision to enlarge and modernize the building. This renovation increased the square footage by one-third. With it, there was an extension of the arcade which allowed incoming and outgoing passengers to have access to the tracks through tunnels. It was also during this time that the façade received an Art Moderne update. As a result, the original Churrigueresque style was revamped with a more contemporary aesthetic. The main waiting room was decorated with blue and yellow tiles and incorporated wooden benches. The station complex was sold to the actual city of Tucson in 1998 by the Union Pacific Railroad. It sold for $2.1 million dollars. After World War II, there was a decrease of passengers so the station was not in prime shape. Once bought, the major and city council made the decision to put 2.8 million dollars worth of renovations in to revert it to the original 1941 style, with accommodations including offices, a restaurant, and retail space. Most recently, in 2002, a ten year restoration and money raising effort finally saw the dedication of the locomotive at the restored station.