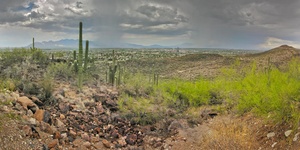 Tumamoc Hill, located in Tucson, Arizona, is an 850-acre national historical landmark that also doubles as an ecological and archaeological reserve.  Its name, Tumamoc (Cemamagi Du’ag), is of O’odham origin. It translates to“regal horned lizard," or “horned lizard mountain” as it was viewed to have a resemblance to a horned lizard, otherwise known as a horny toad. The reserve is currently owned and managed by the University of Arizona, which has leased most of its acres specifically for research and education, while the other 320 acres are owned strictly as a preserve by Pima County. Furthermore, it is a national historic landmark and attracts many tourists over the months. 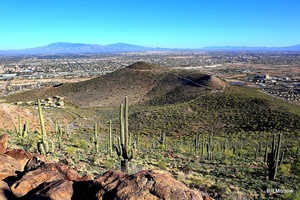 Tumamoc Hill is known to have originally been the home to an ancient indigenous people, the Hohokam, and this site supports evidence of cultures spanning back to the settlement of the region over 4,000 years ago. The Tohono O’odham, decedents of this tribe, later moved their settlement away from the hill. Artwork left behind includes over 460 petroglyphs depicting various people, animals, and patterns. (3) Other archaeological discoveries included: mortar holes, rock circles, and walls. It’s speculated that Tumamoc was also used as a lookout, as Martinez Hill and Black Mountain are visible from the site. The path that winds through the mountain shows the “paths” of the scientists that paved their way and were inspired by the desert.

Below is an audio tour that brings you through the history of Tumamoc Hill.

On October 7, 1903 The Desert Botanical Laboratory opened for the purpose of studying plants and discovering how plants survive in the dry, hot desert environment. In 1906, the Tumamoc Ecological Restoration (the world’s very first restoration ecology project) was established for further study on plant survival. Dr. Larry Venable joined the research team at the University of Arizona in 1982.

He worked to observe seed dispersal and dormancy of plants by using the desert plants as an example. The research was rooted in the basic interest of how plants adapted to the variable conditions that the desert had. “Along the way he and his students used the Desert Laboratory to develop an understanding of the population and community ecology of desert annual plants and their seed banks.” The plant research that was started many years ago has provided a great basis of understanding and has helped researchers address problems of climate change and invasive species. 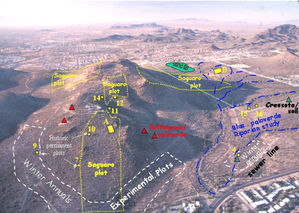 In 1940, Tumamoc Hill was sold to the United States Forest Service for the price of $1. However, the area was kept safely enclosed for future studies. Tumamoc Hill was under the watch of the US Forest Service, although the laboratory got little use. The studies that are done on the mountain tend to be by accomplished University of Arizona scientists and at times students. In addition, during this time the USFS invited the US Marine Corps to build and use training facilities on the hill. However, this did not last forever as the University of Arizona purchased Tumamoc in 1956.

The University of Arizona Purchase

The Tumamoc Ecological Restoration was purchased by the University of Arizona in 1960. In the deed, the University promised to utilize the land for research as well as educational purposes. In the following years, from 1964 to 1990, the old Spalding saguaro study was re-established and the entirety of the 860 acre ecological reservation was declared a National Historical Landmark. In 1981, the State of Arizona designated Tumamoc Hill as a State Scientific and Educational Natural Area due to its biological excellence.

On February 23, 2009, 320 acres of the landmark was purchased by Pima County in a public auction. The main reason for this purchase was to ensure that it was being used for research purposes and conservation. More concretely, the Pima County administration stated that “ This 860-acre icon now will be protected in perpetuity, 105 years after the University of Arizona’s Carnegie Desert Laboratory was established on it.” As of now it is under Pima County’s name and the county is proud that it could protect this historical landmark. 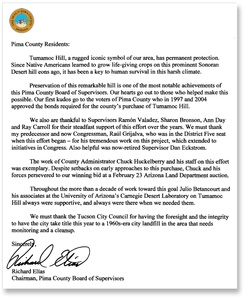 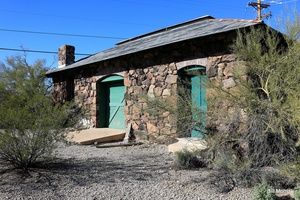 This desert laboratory was founded in 1903 by the Carnegie Institution for purposes of scientific exploration on how plants survive in the desert. From 1904 to present day, the laboratory has made, and continues to make, various discoveries and accomplishments in relation to desert plant physiological ecology. Recently, in 2020, there was a plan developed regarding science and education called the “The Future Life in the Desert.” It displays an overview of the role of the lab and how research can help us learn more about the desert landscape.

According to the Tumamoc Hill Research site:

"The Desert Lab's contribution was critical to the early development of American ecology. The Desert Lab continues to provide hard-won insights about Sonoran Desert ecosystems, how they function and how they might respond to climate variability, invasions by introduced species, and urbanization.".

Besides contributing to the development of ecology, the Desert Lab also has a focus on conservation. In this, researchers wish to "bring back" and protect native species including plants and animals.

The site is currently directed by Michael Rosenzweig and Benjamin Wilder.

Most of the information that the world knows about saguaros  was made possible through the efforts of William Cannon and Effie Spalding. Research on saguaros is ongoing and other areas of research includes the study of desert tortoise disease, . The Tumamoc Hill Research site indicates that for researchers, "Of utmost concern is the increasing encroachment from urbanization, and the inadvertent damage to field plots associated with public access and occasional maintenance along utility easements.". 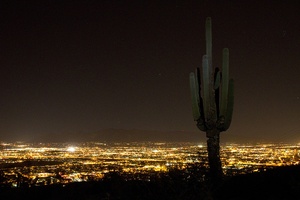 Tumamoc Hill's trails are a locally renowned hot spot for hiking, biking, and walking.  The steep hike is approximately 1.5 miles one way; 3 miles roundtrip and features a fantastic entire view of the city from the top on the trail. The hike also includes beautiful Tucson wildlife as well as various other picturesque sites. Vegetation on the site consists of paloverde, creosote, ocotillo, and cacti. However, Tumamoc Hill is closed off to pedestrians from 7:30 AM to 5:30 PM, due to the one-lane road being considered dangerous between these hours. The hike is no charge, courtesy of the University of Arizona.

Be sure to wear good hiking/walking shoes, as the hill is steep. In addition, the upper road is steeper than the lower road.

“You are required to stay on the paved road and within the overlook areas noted by perimeter cables. There are no exceptions to this.”

No pets are allowed. 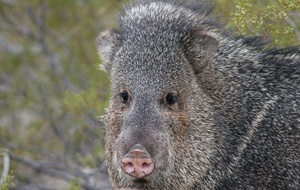 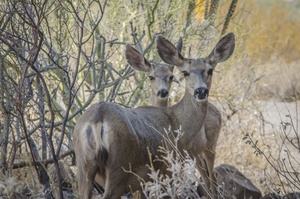 As Tumamoc Hill is a reserve located in the desert, various native wildlife may be observed from the site such as rattlesnakes, javelina, deer, bobcats and coyotes. Various signs have been installed by Clark Reddin to further educate visitors on the animals that reside on the site. Depending on the time of day there are also rattlesnakes that can be observed on the trail.

Tumamoc Hill has a great deal of importance to Tucson. As it is a national historical landmark, Tumamoc Hill serves as a window into history for archaeologists and historians alike. Culturally, from a local hiking standpoint, it serves as both a great cardio workout as well as a beautiful escape into the refuge of nature. Furthermore, it provides a place for people to view the city and also get a taste of history as you walk through the beautiful landscape.

Volunteer work in support of Tumamoc may be found through the Support Tumamoc Hill page. Here, volunteers may offer their assistance in areas such as the "New Ecosystems" project, maintenance, survey and evaluation research, maintaining the library, and working for certain special events. Also, donations are accepted through the Support page , which not only help with repairs of older research buildings, but also help with the additions of new features such as security gates as well as a garden.

As the Hill is a home to various wildlife, its no surprise that a multitude of native bird species also may be spotted at the landmark. This has given way to the Tucson Bird Count, which is a study that has allowed for the benefit of native birds in multiple aspects.

"The Tucson Bird Count is a citizen-science driven effort that has documented how native birds use the habitat within and surrounding Tucson for over a decade. "

The efforts of many Bird Counters has attributed to the enhancement of native bird life in their habitat.

The blog, Tumamoc Sketchbook is a site dedicated to the historical landmark. The site features various forms of artwork such as paintings and poetry. Also, future public art activities may be found on the site.