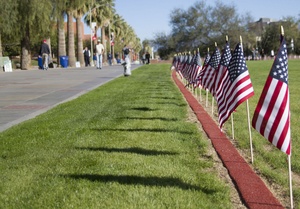 Display of Pride Around Memorial 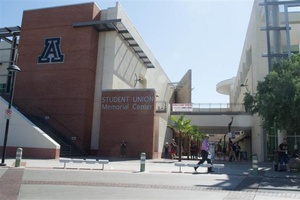 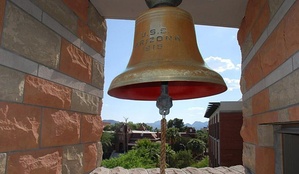 About the USS Arizona Memorial

The USS Arizona Memorial as of now is about three years old being finished in the year 2016. The ship is outlined on the University of Arizona Mall to remember the 1,177 fallen Sailors and Marines during Pearl Harbor. A history that pays tribute, in both memorabilia and design, to an infamous American Battle fought on December 7, 1941. The design and memorabilia of the student union share elements of the U.S.S. Arizona, that was sunk on that day when the Empire of Japan deliberately and suddenly attacked our naval and air forces on Pearl Harbor. Just around the Student Union Memorial Center, there is so much history around the University that a lot of students pass by on their way to class or to get food. It is important to get to know the history around the University and take a little time out of the day to take a look at the USS Arizona Memorial and all the memorials. The emotion when looking at the medallions of each Sailor and Marine is heartbreaking. Each medallion tells a story about that one person with the state they grew up in, their rank for the duties done on the ship, and the year in which they had fallen. The memorial is located right behind Old Main which is the center of the University, and it is booming with life, where every minute you can see an array of activities and emotions running wild.

On December 7, 1941, the Japanese launched a surprise attack on Pearl Harbor. 353 Japanese soldiers attacked the United States naval base at Pearl Harbor. They destroyed multiple ships, air crafts, and killed countless Americans. This event drove the United States into World War II. This historical event is honored within the University of Arizona Campus and brings significant history to the city of Tucson.

History Of The Attack On Pearl Harbor

This was the battle of Pearl Harbor that happened on the Pearl Harbor Naval Base in Oahu when the Japanese bombed the area without warning. The Japanese flew down with fighter planes towards the naval base and destroyed eight battleships, four of them sunk and the others were damaged, the U.S.S. Arizona was the only one that was not able to be raised after the attack The other battleships were able to be repaired and used for service to fight in WWII. The Japanese believed that destroying the battleships was the only way for them to be successful in the Pacific. In the end, the Japanese surrendered on the Battleship Missouri.

The battleship was submerged right off of Ford Island and to this day the ship is still underwater. In Hawaii, there is a Pearl Harbor Memorial in which you can actually visit the ship submerged since it is 40 feet underwater. Around the area, there is fuel oil leaking from the sunken ship that leaves a glossy layer around it. After 70 years of the battleship being submerged underwater, there are still about 500,000 gallons of fuel going to still be leaking. You’re able to visit the USS Arizona in Hawaii for free and as of now is it now reopened. They closed off the Memorial due to their anchoring system for the dock where visitors get dropped off wasn’t working. But now there is a memorial available to locals and visitors right in the heart of Tucson at The University of Arizona.

Some of the key features meant to memorialize the USS Arizona, although not exact replicas include bells, chimes, dog tags, a mast, and other sculptures and design features. For example, a silhouette of the U.S.S. Arizona is present in the curved east wall of the canyon, mimicking the Hawaiian Memorial. There is also a circular staircase area modeled after the battleship's main gun turret. You will also find a water fountain with rusted steel plates and anchor chains depicting the sunken vessel. There are bridges of the east-west corridors of the union, like those you would find on the ship. The south and north sides of the union represent the bow and stern of the ship respectively, with the stern showcasing a memorial mast and sail to keep in line with the nautical theme. Dog tags and medallions for each young man who lost his life that day, hang from the monument. Etched on each are their name, duty, home state, rank, and rating. Many of those who did lose their lives on that day were between the ages of 18-25, which falls right in line with many of the young men walking our campus today. Also, two bells were rescued and preserved and now have a permanent home on the campus. On the third Wednesday of every month, these bells ring seven times in honor of the battle and for those who lost their lives on that tragic day in 1941. On Dec. 4, 2016, the 75th Anniversary of Pearl Harbor, the University of Arizona unveiled the memorial to honor the men who served on the U.S.S. Arizona. At the University of Arizona, one bell resides at the Student Union Memorial center which is rung every day.

The location of the USS Arizona is in the most perfect spot within the University of Arizona’s campus with high volume to foot traffic. I am referring to the mall right behind Old Main and surrounded by buildings where classes are held. It is right next to the Student Union Memorial Center and centered down on a large, grass belt. The mall’s new memorial was finished and ready to be seen by the public on November 21st, 2016. Now at the mall, there is an outline of the USS Arizona which is almost the exact size of the battleship. The ship’s deck replica is in red brick which also goes with the University’s traditional color tone. The entire essence of the memorial was done beautifully and respectfully. You as well can tell how much effort was put forth to make the memorial perfect and with the engravings of the fallen. As well as the dedication that was put into this memorial site speaks through the finished project and will be respected by all visitors who are all welcome to see the memorial.

The memorial is accessible to everyone as it is ground level, the area with the medallions is paved and in between the outline of the battleship is grass. There are no stairs so it is handicap accessible. You can park at any of the garages around campus to get to the memorial but, the Union garage is closest. I would suggest arriving early while school is in session since the Union garage fills up fast due to student, teacher, and staff parking. Parking usually has a charge per hour but on certain days like the weekend, it is free. The other garages that are farther may have more availability if you don't mind a longer trip to get to the mall. There is not additional transportation to take you from the garage to the mall but it is a short way to get there. Also, take into account the foot traffic that is around the University. By the hour classes are either starting or ending which means there will be a lot of foot traffic crossing the streets.

Also, the mall is not just a memorial; it serves many purposes with the students and faculty of the university and the surrounding community. It is known as the heart of campus, and in addition to its historical features, it is lined with flowers, trees, statues, buildings and green grass that add to the rich history and beauty of the University of Arizona. The location of this memorial was put in the best location so that everyone that walks past can stop to take a look into history. You can see that the Student Union Memorial Center is more than just a building. You are able to can sit down and get a bite to eat, do some shopping at the bookstore and the food market, homework, or chat with friends. There are different offices like ASUA, Game Room, Gallagher Theater, LGBTQ affairs, etc. It is the most used building on campus and is filled with diversity and history that will be remembered for decades to come. 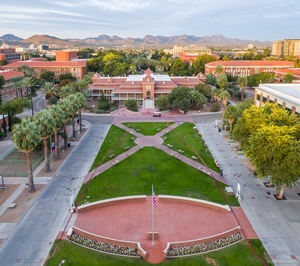 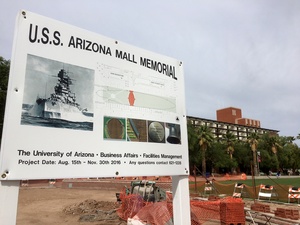 Information Board of Memorial 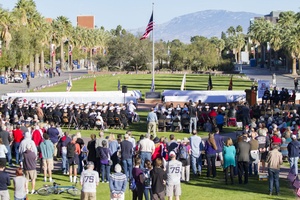 The University of Arizona football team strived to pay tribute to fallen soldiers during the 75th anniversary of Pearl Harbor. The team wore special uniforms during their game against the University of Hawaii. Lauren Bruner who was a survivor during the attack on Pearl Harbor was honored during the football game against the University of Hawaii. He was one of the six remaining survivors from the U.S.S. Arizona. He sadly passed away recently in September 2019 at the age of 98 and will be buried at the wreckage site of the USS Arizona. The goal of the uniforms and tribute was to explain the UA's special relationship to the ship. The jerseys were crafted carefully and specifically. Nike, UA's athletic apparel manufacturer, was supportive and easy to work with for this project. Together, the UA and Nike worked together to create a jersey that was red, gray, and white. The colors each represent a different part of the ship - red for the keel, gray for the hull, and white for the upper mast. The ship's hull number was included on the backside of the jersey, BB-39. 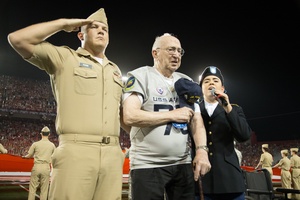 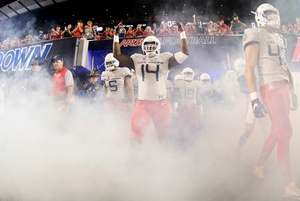 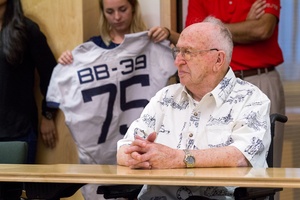