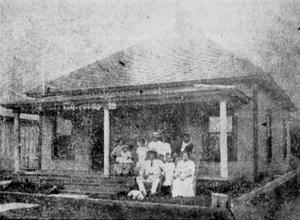 Barney S. Cleaver, the first African-American policeman in Tulsa, was born in Newbern, VA in 1865. In Newbern, he attended public school until he was fifteen. He then moved to Charleston, WV where he initially worked on a steamer and later worked in the coal mines. As an Oklahoma & Gulf Coal Co. employee, he served as an immigrant agent, bringing more than four thousand employees from West Virginia to Oklahoma.

While living in Coalgate, OK, he was appointed special deputy U.S. marshal under Captain Grady. He moved to Tulsa circa 1907, was first appointed city patrolman, and later became deputy sheriff under Sheriff McCullough.

Deputy Sheriff Cleaver and his wife, Vernon Wren, lived at 508 North Greenwood (pictured above) in 1914 and owned interest in the building across the street from their home, The Cleaver-Cherry building.