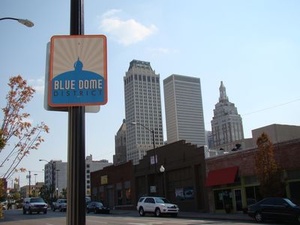 The Tulsa Blue Dome District is known today as a night life destination, with heavy art and music influences. The famous Blue Dome Building is located at the corner of 2nd and Elgin Street in Downtown Tulsa. The district is filled with bars and restaurants, surrounded by many other down town destinations. However, just less than a century ago, it was merely a gas station. It's odd to think that a place that today is celebrated by murals and festivals was once a pit stop for gas. It's also notable what little historical information there is about the Blue Dome building and its surroundings. The Tulsa Blue Dome District that we all know and love today simply was not quite as appreciated in its previous role. 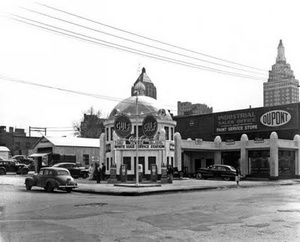 The iconic Blue Dome Building was built in 1924 and is the heart of the district. The circular two story building has a unique art deco architecture style, completed by its famous blue roof. It initially was built as a gas station called White Star Service Station, complete with nine gas pumps and a sleeping quarters for the station attendants. The gas station was apart of the original Route 66 and was rather prosperous due to the flow of traffic and customers the route provided. However, after the route was moved down to 11th street, the gas station lost its primary source of income and closed its doors in 1953.

Soon after the building was purchased by Michael Sager. He updated and repurposed the old building to turn it into Arnie’s Bar. This gave the dome a new purpose for a while, but the bar soon too closed. The building has since been an antique shop as well as a restaurant.

Today the Blue Dome building stands vacant, but is still considered to be the heart of the district.

Information in this paragraph comes from TulsaPeople's article "What’s Old Is Blue" and The Tulsa Tribune's article "Much of Tulsa's history told in brick, stone, wood."

Due to the fact that the dome building was simply a gas station it wasn’t very appreciated. Subsequently there is very little historical information on the building. This is an interesting factor to note because the building is considered the heart of the district. One would assume to be considered the heart of a district it would need a significant past. However, the blue dome does not. It is simply loved for its unique style and symbol to the district. 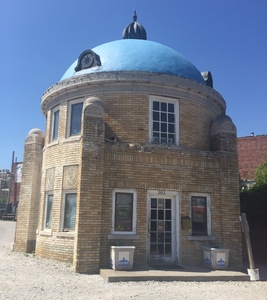 Today the Blue Dome District is made up of nine blocks featuring eight buildings. The local bars and restaurants make this Tulsa area a great location for a night on the town. This area is known for its beautiful buildings and architecture, but is popular due to the art and musical influences in the district.  Two Tulsa entrepreneurs, Mike Bailey and Pat Walters, have heavily invested in the area and help to put on frequent events, including the annual Blue Dome Arts Festival. They purchased the building in 1999 on a fluke for $70,000.

Information in this paragraph comes from The Tulsa World's article "Blue Dome Deal." 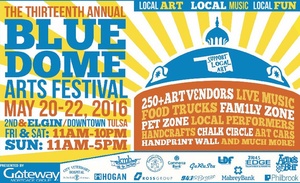 The annual Blue Dome Arts Festival is held each May, The festival consists of live music, art vendors and food. The events purpose is to promote and highlight local artists and musicians. Almost 250 visual/craft artists attend to showcase their craft. The art is hand-made and consist of paintings, pottery, carvings, photography, jewelry, home decor, woodcrafts, apparel and glass work. The on-stage entertainment is also local and is made up of singers, songwriters and performers. 2016 will be the 13th year of the event. 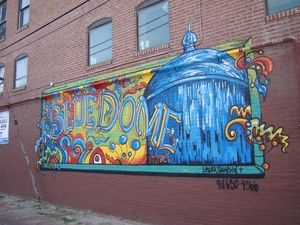 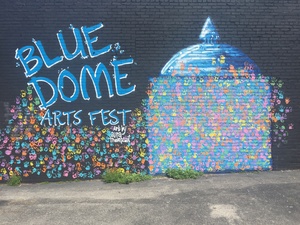 Information in this paragraph comes from http://bluedomearts.org/ .

It is interesting to consider how most monuments were once of importance and now stand vacant. Whereas this location has no significant past, and today stands vacant, yet is now more popular than ever. The Blue Dome District today is much more than a gas station. Although it is simply a location for a night out on the town, the district is much more appreciated and populated than it was in the past. Wether or not this appreciation is due to the musical and art the district promotes, or simply because it has popular restaurants and bars, we do not know. We are simply thankful to have this unique location as a part of Tulsa's history as well as its present.