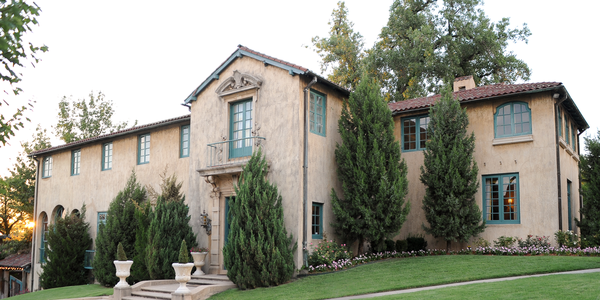 During the beginning of the oil boom Carl K. Dresser, President of S.R. Dresser Manufacturing Company, commissioned a well known Architect, Albert Joseph Bodker, to design a home for his family in 1919. Mr. Bodker is famous for creating the Waldorf-Astoria hotel in New York City. The Italian Renaissance-inspired home was complete by November of 1920 for Dresser's wife Pauline van der Voort Dresser and their two adopted boys. The Dresser Mansion presides at 235 W. 18th St. in Tulsa, OK. A stucco facade still blankets the exterior walls while a rich terra cotta roof finishes the home. One of Tulsa's oil historical home is estimated to be around 10,000 square feet and possesses 35 luxurious rooms. Today one can tour the home and see that not much has changed from the 1920s. The rooms are still exquisitely decorated and photos of the Dresser family ornament the walls. Throughout the year, one can drive by and see wedding ceremonies, anniversary parties, and even historical tours going on in one of Tulsa's few historical homes.