Swan Lake is a historic district located in Tulsa, Oklahoma.  Its boundaries are 15th and 21st Streets on the north and south, with Utica and Peoria forming the east and west boundaries.  The combination of residential, commercial, and church buildings in the Swan Lake area make it a valuable asset to the City of Tulsa.

Col. Adolphus D. Orcutt was a native of Kentucky and a Union veteran of the Civil War.  Col. Orcutt became one of the area's largest cattle ranchers while the land was still part of the Creek Nation.  In 1866, Col. Orcutt married his second wife, Adaline Hodge, who was a Cherokee Indian and the daughter of Alvin T. Hodge.  Col. Orcutt built a spring-fed watering hole near present-day 18th and Utica.  Samuel Augustus "Gus" Orcutt was the oldest son of Adolphus Orcutt and his first wife.  Gus Orcutt married Annie B. in 1890.  Since Annie was one-quarter Creek, she and her children were eligible for land allotments issued to tribe members as a result of the Dawes Allotment Act of 1887.  Swan Lake was originally part of the 800-acre allotment.  Gus and Annie built a home near present-day 16th and Peoria.  After gaining title to the land, the watering hole became known as Orcutt Lake.  The Orcutt's would allow members of Tulsa to visit their lake to escape the heat of the city.

In 1908, a group of developers led by Gus Orcutt, purchased 25 acres on the north edge of the pond and enlarged the lake.  After the enlargement, the developers put in Tulsa's first amusement park, Orcutt Lake Park, on the north shore.  Orcutt Lake Park featured a dance pavilion with bathhouses underneath, rowboat rentals, midway concessions, a cafe, a covered swimming pool, and a $7,600 roller coaster.  By 1917, the area around Orcutt Lake Park had become a residential area.  A man by the name of E.J. Brennan platted the land around the lake, naming it "Swan Park."  He donated what he renamed "Swan Lake" to the city of Tulsa as a public park. 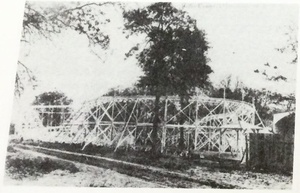 In 1919, the street surrounding the lake is paved. Then it 1920, the central feature of the lake, a large concrete fountain, was built.  Using Works Progress Administration labor, the city in 1938 rebuilds lighted, rustic concrete fountain in the center of the lake and buys two swans to live in it.  The water supply to Swan Lake was cut off during a drought in 1948. Much of the water in the lake evaporated, while the rest became stagnant. The lake was later drained and refilled, but structural deterioration turned the lake into a nuisance. Rats, mosquitoes, stagnant water, and a collapsed drain line plagued the neighborhood.  In 1987, the city completes a $1 million renovation project funded by bonds, a sales tax and private funds.  The refurbishment brought the desired wildlife back to the lake, but in 2000, the fountain gave out again and has yet to be refurbished. 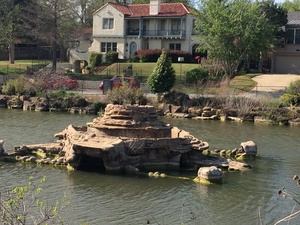 The Swan Lake neighborhood developed during a thirty year span.  The original residents of the area came from different backgrounds and professions.  The larger homes were occupied by more affluent persons such as oil barons, architects and builders who became wealthy after the discovery of oil in the Tulsa area.  The smaller homes and apartments were occupied by average workers from a variety of fields, such as shop keepers, repairmen, and a variety of other services needed in the booming new city of Tulsa.  The Swan Lake Historic District also includes a few architect-designed residences, commercial buildings, a church, and two parochial schools.

Two story houses built around the lake from 1919 to the present represent a variety of architectural designs.  Other parts of the neighborhood contain bungalows, clapboard and stucco, quadruplexes and six-plexes of brick, and stone. 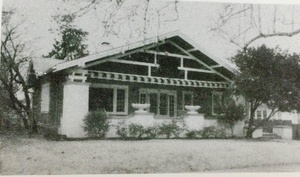 This particular bungalow, built in 1919, shows oriental design influence under the gabled porch and on the columns.   Photo by Swan Lake Neighborhood Association. 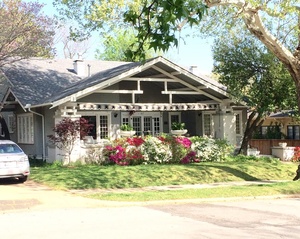 The same bungalow in April of 2016.  Photo by Natassja Ridley. 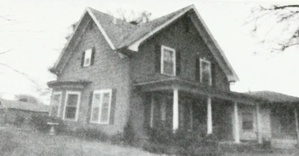 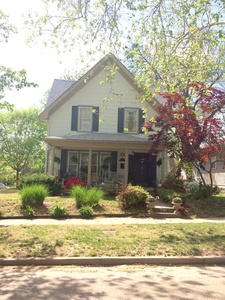 The same house in April of 2016.  Photo by Natassja Ridley.

The Swan-Lake neighborhood has more two and three-story, multi-family apartments and duplexes built between 1920 and 1930 than any other residential area in Tulsa. 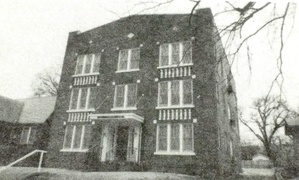 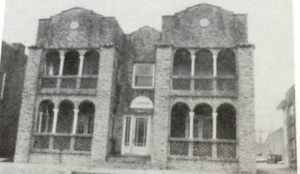 Christ the King Church is the second oldest catholic church in Tulsa, but it was the first in the world to be dedicated to "Christ the King."  The stained glass windows, designed by Alfonso Iannelli, are described as some of the best in the United States.  Marquette schools, a later addition that complements the design of the church, was built in 1932 and designed by architect Fredrick W. Redlich.

A combination of Gothic, Byzantine, and art Deco styles, the church building's progressive design caused some controversy when it ws built in 1927.  The architect, Francis Bary Byrne, had studied and worked under Frank Lloyd Wright as his Okay Park studio in 1902-1909.  Christ the King is considered one of Byrne's finest achievements in ecclesiastical architecture.  Byrne, a Roman Catholic, was interested in the liturgical reform movement and strove to create new building designs that would better serve the congregation and priest.  He is best known for his integration of the nave and the sanctuary, which is found in the design of the church.  The integration of these two elements created a unified atmosphere between the congregation and the priest by making it possible for all of the congregation to see, hear, and participate with the priest during worship. 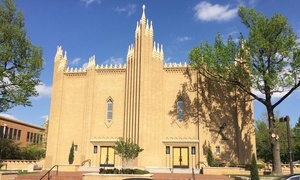 Although the area is now part of the core of the present city, it is important to keep in mind that this neighborhood was originally a suburban area.  Today, there continues to be a strong market demand for houses in the neighborhood by young families who value its large houses, quiet tree-lined streets, and the areas proximity to the Utica Square shopping center, other public parks, the Cherry Street District, and the Tulsa Central Business District.