TheWayItWas is a heavy metal band from Tulsa, OK signed to Witch Sermon Records.  TheWayItWas describes their music as 'landscape metal' and credits their influences from a diverse range of sources:  From Ennio Morricone, Bolt Thrower and Nazareth to the American West and classic country music.   Band members have been involved in the Tulsa DIY/underground music scene for more than a decade.  Former bands include The Moss, Fumar, Tulsa, Skullhammer, and Ptiaradactyl; lead singer/guitarist Reid Hawley and drummer Braxton Mundell currently split time with their other band, Constant Peril.  You can catch The Way It Was play their favorite downtown venues, Soundpony Lounge, The Yeti, and Downtown Lounge. 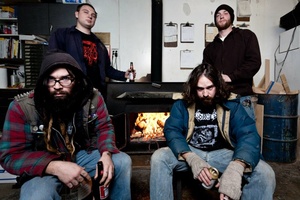 (photo used with permission from TheWayItWas)