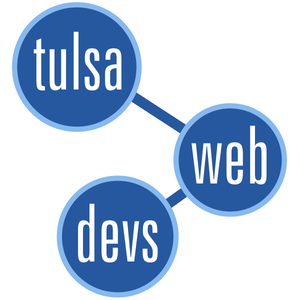 TulsaWebDevs is a not-for-profit community of web developers and professionals from the Tulsa area. The group's mission is to make Tulsa one of the best cities in the world for web developers.

Meets every 3rd Monday of each month at the i2E Tulsa office for web technology presentations.

Meets every Friday at Fab Lab Tulsa for coworking.

Tulsa Web Devs started in November of 2010 with 6 members from the Tulsa Ruby, Tulsa Python, and Tulsa PHP user groups. The group initially met on the 2nd Monday of each month at The Collaboratorium. As a "polyglot" group, members presented and discussed cross-platform technologies and frontend technologies like CSS and JavaScript - a pattern that continues now.

By Mid-2011, group membership and attendance were growing steadily. On June 4, 2011, Tulsa Web Devs hosted a Tulsa Transit Hack Day to explore the idea of putting the Tulsa Transit schedule data onto Google Maps - a project that pivoted the group towards active project development. With help from INCOG, Tulsa Web Devs created a functional prototype which was presented at Tulsa+ and motivated the group to plan their first Tulsa Hackathon for October 7-8, 2011 at Fab Lab Tulsa. The 2011 Hackathon was attended by 37 people and completed a number of web projects for local charities and civic organizations.

After their successful Hackathon on site, Tulsa Web Devs moved their monthly meetings to Fab Lab and started weekly coworking events there. Weekly attendance varies from as few as 2 to as many as 15.

In 2012 Tulsa Web Devs sustained what had become their core activities - meeting once a month for web technology presentations and every week for coworking. The monthly meetings were moved to the 3rd Monday of every month, and are hosted at i2E's Tulsa office, with space to accommodate the attendance which has grown to approximately 30.

The group's Tulsa Roadway Information Feed from the 2011 Hackathon inspired another pivot towards opening civic data and making civic apps. The GitHub organization boasts a number of open-source civic web projects - many actively developed and maintained with cooperation from city agencies and officials.

Tulsa Web Devs is run as a flat organization without bosses or officers. Leaders, teams, and conventions emerge spontaneously to order the group's activities.

As the group has grown, they have formed a number of special interest groups, including Red Dirt Web Designers, Tulsa Drupal Devs, Tulsa WordPress User Group, and Code for Tulsa - a Code for America brigade which continues most of Tulsa Web Devs civic projects.

Tulsa Web Devs activities' are funded by annual and ad-hoc sponsorships. The founding sponsor was Tulsa-based Anspire Professional Recruiting and Consulting. The group has also been annually sponsored by Mozilla and by i2E. Funds from sponsors are used to pay for food, drinks, supplies, and a number of web services. No member of Tulsa Web Devs is paid for their activities in the group.