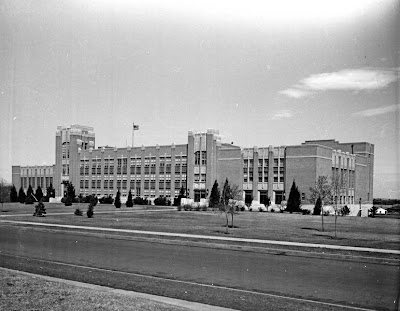 Will Rogers High School was designed by Joseph R. Koberling, Jr. and Leon B. Senter and was named after Oklahoma native humorist Will Rogers. Construction on the Will Rogers High School building was begun October 11, 1937 and building was officially accepted from the contractor June 30, 1939. It was opened for the first classes September 11 and dedicated November 5, 1939. The 26.894 acres of land were purchased August 28, 1936 for $21,772.74. The building cost $1,239,905.59 and equipment $158,192.53. Approximately 45% of the total amount was furnished by the United States government through the Public Works Administration. The growth of the oil industry in Tulsa spurred a major population explosion that created a huge demand for homes and schools through the 1910's and 1920's

The naming of the high school for one of America’s most outstanding citizens was emblematic of more than a tribute to a man who has passed into the Great Beyond. It imposes upon us, who use t, an obligation to fulfill. It forcefully brings to our conscience the responsibilities of our heritage, for truly the name is heritage.Born within the boundaries of Oklahoma, Will Rogers was typically a true American. In his blood flowed the life of the American Indian and that of the pioneer responsible for the development of this great land. Within his heart rested a feeling of brotherhood for mankind and a sympathy for all those who were the victims of persecution. From his mind emanated the thoughts and actions of a person thoroughly schooled in the use of free thought, free speech, honest convictions, and sincere purpose. For, to live meant to be an American citizen, to him.

Will Rogers was a major entertainer in the 1920’s and 1930’s. He was a political comedian whose sense of humor kept many people in good spirits. His career began as a cowboy in a Wild West Show. His roping ability and wit got him into the show business, and eventually Broadway and the movies. Will Rogers stood for many things but the main thing he stood for was his concern for mankind. Will Rogers was a wonderful man with a big heart. He was always there for his friends and even people he didn’t know. Beginning his career with Texas Jack’s Wild West Show in Johannesburg, South Africa, Will Rogers rose consistently through the trials of theatricals to reach a new height of popularity due to his ability to always be himself no matter what the situation might be.

Typical of PWA period Art Deco, this school was featured in a Time magazine article "outlining the high school pattern of the future" in which it was called "a model progressive high school" in "one of the most progressive school systems in the study." The elaborate buff brick school features two large towers at the front corners of a large main block of classrooms. The towers are supported by stepped pilasters with ornate details in terra cotta "capitals". Panels above the double doors feature Will Roger’s life in two phases. One depicts his cowboy days with a horse, roped steer, and the prairie, and the other his movie days with a reel camera, airplane, and polo rider. The school has an auditorium designed to serve 1,500 students. But a school is more than just a building. It is the students and staff that make up the story and history of a school such as Rogers. 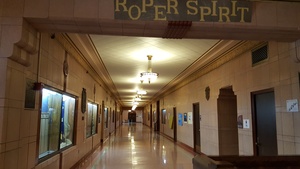 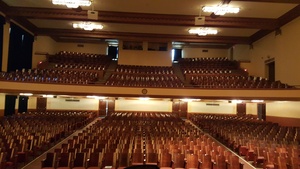 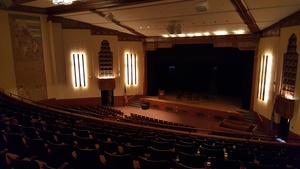 An influential visual arts design style that first appeared in France just before World War I and began flourishing internationally in the 1920's, 1930's and 1940's before its popularity waned after World War II.

Steve Write wrote that experts and authors marveled at the rare example of Will Rogers High after surveying over 84 other schools in 30 major cities with some elements of Art Deco type of architecture. Only one or two could equal the Tulsa school in quality of design, detail, materials and maintenance through the years.

" Will Rogers High school is notable in its integrity and condition. It has been in continuous use since its construction and has had two major alterations - a 1949 addition to the east classroom wing, and a 1964 one-story gym and extension to the west classroom wing. The additions to the building are distinguishable from the original building, and the 1949 addition has gained its own historic integrity. Will Rogers High School was placed on the National Register of Historic Places in 2007, as an outstanding example of Art Deco school architecture and as a model of progressive education in the United States."

In 2011, Tulsa Public Schools converted Will Rogers High School to a dual enrollment school for students offering those who complete the program at Rogers up to 66 college units, the equivalent of an Associate's degree. It has been since renamed "Will Rogers College High School." The student body consists of grades 7 through 12, eliminating the traditional middle school (junior high school). The first graduating class of the "new" school was in 2014.