Woodward Park, located at 2324 S. Rockford Avenue, has long served as a beacon of beauty throughout the history of Tulsa. Originally part of the enormous ranch that was Perryman's Pasture, this 45-acre tract of land serves many purposes, but primarily to act as a sanctuary from the hustle and bustle of the second largest city in Oklahoma. 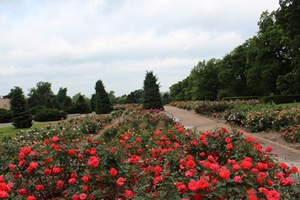 A little-known fact, the ever-popular Tulsa Rose Garden was made possible through the Civil Works Administration (CWA), a program put in place by President Franklin Delani Roosevelt in 1933. Designed as an Italian Renaissance-styled botanical garden to match the neighboring mansion built in 1919, the construction work began 1934. Most of the work, whether excavation and grading, stone masonry, and planting, was done by hand or with teams of horses, which pulled wagons conveying tons of rock from one end of the site to the other, three city blocks away.

Designer C. Burton Fox drew up plans for five terraces which each included fountains, a variety of junipers, and a colorful array of perennials, with only terrace four having roses planted. Later, due to the popularity of rose gardens at the time, all five terraces were filled with roses.

Unfortunately, due to this monoculture of plantings, Rose Rosette Disease spread throughout the garden in the 2010's, and many of the approximately 3,000 roses had to be removed. Today, however, the Rose Garden is going back to its roots by including perennials originally planned for the terraces, with trial roses also planted in the garden to test for resistance to Rose Rosette Disease. 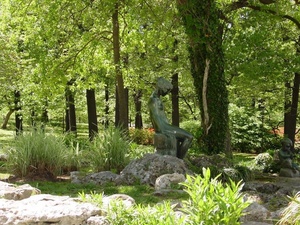 Watched over by Pan, Greek God of the wild, the rock garden was originally a collection of streams that flowed through carefully laid limestone rocks.

During the mid-60's and 70's, in order to turn a severely eroded hillside into less of an eyesore, thousands of azaleas were planted, and now make the lower rock garden into one of the most viewed areas of the park. During the spring, however, the azaleas are not alone in their beauty, as blossoming redbuds, whitebuds, and dogwoods are in full bloom during the springtime. Also, in order to provide shade along the walking paths for visitors, native oaks and hickory trees populate the area surrounding the garden. 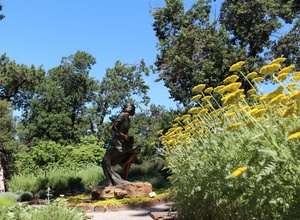 Its name deriving not from the wife of William Shakespeare, the Anne Hathaway Herb Garden is both for public enjoyment as well as benefiting the well-being of visitors.


With specimen including geraniums, sages, mints, basil, summer and winter savory, lemon thyme, burnett, rosemary, marjoram, oregano and tarragon, the population of the herb garden in plentiful, however visitors are still asked to only take one leaf of each plant for use and/or smelling. Welfare and management of the garden is currently taken up by the City of Tulsa and various volunteers. 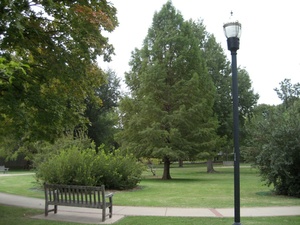 Though Arboretum’s are traditionally thought of as museums, Woodward park frames it’s Arboretum as a place of exhibition, study, and general leisure.

Home to ninety-six trees in total, the Woodward Arboretum is populated by ninety native or native cultivar species including oaks, pines, dogwoods, and various kinds of shrubs. The area is also a home for sixteen species of non-native ornamental trees.

While open hillsides, secluded benches, walking trails, and natural flora are the primary aspects of Woodward Park, the statues that reside there are also highly recognized. Woodward has a grand collection of statues, including, but not limited to:

Appeal to the Great Spirit, which was donated to the park by Central High School. This statue depicts an Indigenous person on horseback pleading for an explanation for colonization.

The park also has a statue of the Greek god of the wild, Pan. The original statue was stolen, but a sketch of the monument by Hubert “Hubie” Pollok was used to recast the statue, and it was eventually rededicated.