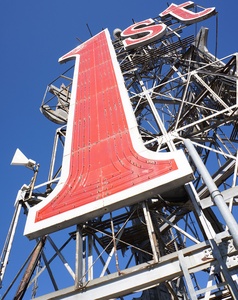 1st Neon Sign
The neon sign atop the First National Bank Building is 1936 neon technology.  The tower to which the 1st is attached is 100 feet tall.  The 1st is 50 feet tall and consists of red tubing on a white background.  The 1st was out of service from 1974-1984, due to the energy crisis, and was relit in 1984.  The sign can be seen from almost 75 miles away from the air at night and 20 miles away on a clear day.

East Tower
The East tower, originally known as Merchants Bank Building, was built in 1915 and opened in 1916.  The tower is 228 feet tall and rises 16 stories.  It was the tallest in St. Paul until it was overtaken by Wells Fargo Place.  The exterior of the building is a glazed brick with terra cotta ornamentation. 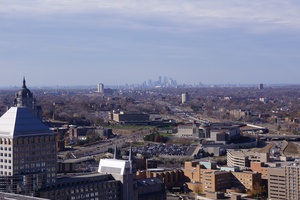 North Tower
The North tower was built in 1971 and consists of 9 levels.  It contains office and lobby space and it is the main parking ramp for the building. 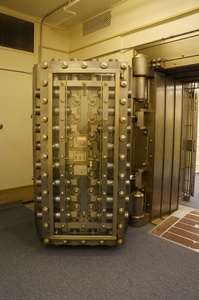 
The First National Bank building is known for its history and lore.  Some have claimed that gangsters of the 1930s stored money there.  The building contains several very large vaults and at one time stored millions of dollars.  It is believed that the world's first skyway was built to connect the East and West tower. It is also one of the highest skyways, 17 stories high, and was built in 1931. In the bank basement is the remnants of a 96-foot long pistol range. The bank guards were required to practice twice a week to maintain a shooting efficiency 90 out of 100 bulls eyes. 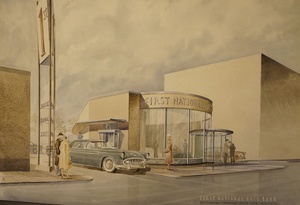 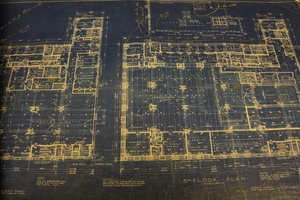 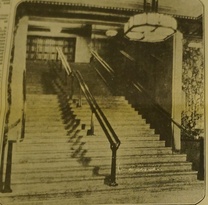 1930s picture from inside the First National Bank Building. Photo ©