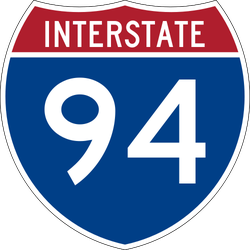 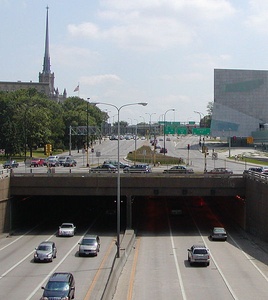 The Lowry Hill Tunnel portion of I-94, below Hennepin and Lyndale Avenues. Photo taken by William Wesen.Interstate 94 (I-94) is the main interstate that runs through the Twin Cities.  I-94 links downtown Minneapolis and St. Paul and connects to Interstates 394, 494, 694 and many highways and other major roads in the metro area.

I-94 enters the eastern metro, from Wisconsin, at exit 258 within the City of Lakeland.  Heading West, it passes through Woodbury, Lake Elmo, Maplewood, St. Paul, Minneapolis, Brooklyn Center, Brooklyn Park, and Maple Grove, before exiting the metro area on its way to North Dakota. The last Maple Grove exit is 213 at County Road 30 (Maple Grove Parkway).  This span of the interstate, through the main part of the metro, is 45 miles long.

Most of the interstate through the metro area is 3-4 lanes wide in each direction, though some areas are 2 lanes or 5 lanes.  This lane capacity is inadequate during rush hour and many other parts of the day causing long traffic jams.  Current development in the surrounding areas limits widening the interstate.  This is especially true in some of the heavier traffic areas of Minneapolis and St. Paul.  To aid with traffic jams mass transit bus systems and light rail are being enhanced.