Light Rail Transit within the Twin Cities currently consists of the Blue Line and the Green Line.  The Southwest LRT Project (Green Line LRT Extension), is a proposed new light rail service that is in the planning stage.  Additionally the Bottineau Transitway (Blue Line Extension), the Gateway Corridor, the Red Rock Corridor, and the Minneapolis Streetcar System  are additional potential light and commuter rail lines.  The Northstar Line is a commuter rail serving the north side of the metro and beyond.

TCRT commissioned water-color painting of the streetcar system in the Twin Cities, originally
completed in 1904; updated 1916. From Wikipedia.The Twin Cities has a history of passenger rail dating back to the 1890s, notably via the Twin City Rapid Transit Company.  Various passenger rail lines and street cars existed until they were sold and demolished in 1954 due to pressure from automobile companies.  At its height in 1922, rail transit consisted of over 525 miles of track and had 1021 streetcars.  Rail lines extended about 50 miles from Stillwater to Lake Minnetonka.  Extensive rail lines served many other areas of the Twin Cities, as is evidenced by the picture to the right.

On June 19, 1954 the last streetcars ran in Minneapolis. Nearly all of the leftover vehicles were burned in order to recover scrap metal or sold.  Two of the wooden streetcars in use during the 1950s were saved.  One is currently owned by the Minnesota Streetcar Museum and one is owned by the Seashore Trolley Museum of Maine.  A Twin City Rapid Transit Company streetcar is in operation near Lake Harriet on the Minnesota Streetcar Museum's route. Additional information about Twin Cities historic rail lines  is available on Wikipedia. 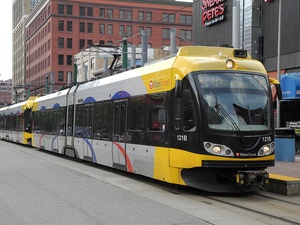 Blue Line Light Rail train in downtown Minneapolis. Photo by tracktwentynine on FlickrThe Blue Line is a 12.3 mile light rail line extending from Downtown Minneapolis to Mall of America that opened on June 26, 2004.  The line starts at the Target Field Station in downtown Minneapolis.  There are an additional 17 stops before reaching Mall of America.  These 19 stations serve many areas including the Metrodome, Cedar-Riverside, Midtown, Minnehaha Park, the VA Medical Center, and the Minneapolis St. Paul International Airport, among others..  The Target Field Station also connects with the Northstar Line and it will connect with the Central Corridor line and other proposed light rail lines.  Additionally, this station is served by Bus Rapid Transit, which expands the reach of people riding on the Hiawatha Line.

The Green Line is the newest light rail line in the Twin Cities, it opened June 14, 2014.  The line is 11 miles in length and serves 23 stations.  The line's primary purpose is to connect Downtown St. Paul to Downtown Minneapolis and the University of Minnesota, in-between each downtown. In St. Paul the Green Line originates at the St. Paul Union Depot.  This is a great place to start as the Union Depot is a great historic building and it is a transportation hub for Metro Transit, Jefferson Lines buses, and Amtrak's Empire Builder.  Heading West, major stops include Robert Street, the Minnesota State Capitol, various stops along University Avenue, Stadium Village, the University of Minnesota, the Metrodome, Government Plaza, Nicollet Mall, and the Warehouse District.  The line ends at the Target Field Station, from which riders will be able to travel via the Blue Line, Northstar Line, and various bus systems.

The Southwest LRT Project  is a 15 mile light rail line currently being planned.  The proposed line would connect at Target Field Station and extend the Green line Southwest through Minneapolis, Minnetonka, Hopkins, and St. Louis Park.  17 new stations would be built and the projected weekday ridership would be 30,000 riders by 2030. It is expected to cost $1.25 billion and is projected to open in 2018.

The Bottineau Transitway is a proposed mass transit route that may evolve into either light rail transit or bus rapid transit.  The transitway would serve communities to the North of downtown Minneapolis including Brooklyn Park and Maple Grove.  If developed as a light rail line 10 stations are proposed.  The line would start at Target Station in downtown Minneapolis where it would be connect to other light rail and bus lines.  In 2030 the estimated ridership would be 19,500.

The Gateway Corridor follows Interstate 94 from the St. Croix River Bridge to St. Paul.  The corridor is currently looking at way of enhancing transportation.  Both bus rapid transit and light rail transit are being considered.  Either option would run along Hudson Road from St. Paul to Woodbury. Both options would have the same number of stops and are expected to have 9,000 daily riders. 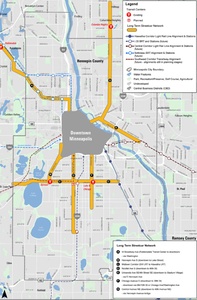 The Red Rock Corridor is a proposed commuter rail line that would run from Minneapolis through St. Paul and southeast along the Mississippi River to Hastings.  The rail line has 10 planned stops originating from Target Field Station on the west side.  Other stops along the way may include Northeast Minneapolis, the University of Minnesota, St. Paul Union Depot, Newport, Cottage Grove, and Hastings.  The line would be 30 miles long.

The Minneapolis Streetcar System is a proposed streetcar system for the city of Minneapolis.  Extensive studies and plans for the new system were completed in 2007.  In December 2010 the Federal Transit Administration granted $900,000 for further study.  The Streetcars would likely not be separated from other traffic or given traffic-signal priority.  There is a proposal to include seven lines; the Central Avenue Line, Nicollet Avenue/Mall Line, Midtown Greenway/Lake Street Line, University/4th Street Line, Broadway/Washington Avenue Line, Hennepin Avenue Line, and Chicago Avenue Line. The Nicollet, Central, and Midtown lines are the most likely to be built. Most lines are expected to cost between $80 million and $100 million each.