Minneapolis, Saint Paul, and some of the inner suburbs are all served by Metro Transit. There are also other transit authorities serving the outlying suburbs. Metro transit regular adult fares are $2.25 during peak periods (6AM-9AM and 3PM-6:30PM Monday thru Friday) and $1.75 during off-peak periods (these fares come with free transfers lasting 2.5 hours). Ticket machines at light rail stations will also sell 6-hour passes for $4 on weekdays or $3.50 on weekends, and 24-hour passes for $6. 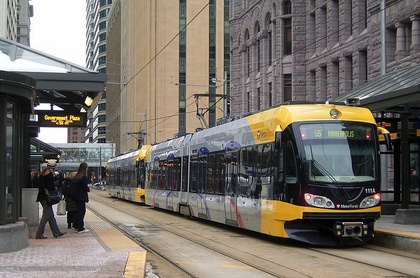 Hiawatha Lightrail Line (Government Plaza - Metro Transit station).  By Sinn - licensed under CC BY-SA 3.0
Unlimited ride passes are available in 1-day, 7-day, and 31-day formats. Stored value passes (pay-per-ride) are also available. Day passes are $6 and can be purchased online, at a Metro Transit Store, from a bus driver, or a ticket machine at any light rail station. 7-day ($22) and 31-day ($59-$113.50) passes must be loaded on a Go-To card, which can be purchased online, at a Metro Transit Store, or participating Metro Transit sales outlets. Stored value passes can be loaded on a Go-To card in increments of $10 (up to $400), and come with a 10% bonus on each purchase (e.g. a $10 purchase would give you $11 in fare value, $20 would give you $22, and so forth). Once in possession of a Go-To card, reloading it with new unlimited ride passes is easy and can be done online, at Metro Transit stores and outlets, or at light rail ticket machines.

The Twin Cities have an adequate bus system, hobbled by confusing connections to suburban lines, and poor service during non-rush hours (and no service after 1AM except on a few select routes with "night owl" service). The Metro Transit website allows you to search for the best routes between your current location and your desired location, and is as good as most such systems in providing good routes and connections. Bus stops are located throughout the area, but some are served only very infrequently, and most are not labeled as to which routes serve them at which times. Buses on Hennepin Avenue, Washington Avenue, Lake Street, and University Avenue are most consistent and provide transport to the greatest numbers. Express buses operate between the two downtowns regularly during rush hours, and buses to suburbs, or connecting to light rail are limited, and best used during high traffic times.

Light rail serves Downtown Minneapolis, the Hubert H. Humphrey Metrodome, the airport, the Mall of America, and all points in between. There is currently only one line (the Hiawatha line), with a new line connecting Downtown St. Paul with Downtown Minneapolis expected to open in 2014. Eastbound and Westbound bus lines also intersect the light rail line at most points, so it is possible that visitors could use public transport exclusively to explore the cities of Minneapolis and Saint Paul. About a mile West of the Mississippi and much of the border between Minneapolis & Saint Paul, it's possible to use east-west bus routes on the Ford Parkway, Lake Street, Franklin Avenue, or Hennepin Avenue for expedient travel within the cities and to most residential neighborhoods.

The Twin Cities, despite unfriendly weather for bikes from about November to April, provides many resources for both recreational and commuting bicyclers. Most major, and primary one-way, and two-way, streets have ample bike lanes which are marked and visible during fair weather months. In addition, all Minneapolis in-city lakes have bike paths that are separated from pedestrian traffic (and from motorized vehicles), and offer one-way transit around the entire Chain of Lakes, extending to Minnehaha Parkway and into Saint Paul. As if that were not adequate, former rail line paths sustain two-way bike lanes following east-west routes just South of Highway 394 and into downtown Minneapolis, known as the Cedar Lake trail; and just North of Lake Street, following a path known as the Midtown Greenway; and both are connected via a spur alongside an active freight railway just East of Cedar Lake and North of Lake Calhoun. It is possible to connect, via either east-west line, to bike trails that connect far into the Western suburbs and beyond, and recreational bicyclers can travel along historic rail lines for uncounted miles West.

Both buses and light-rail trains are equipped with bike racks. It is not uncommon, though still shocking, to see bicyclers in sub-zero weather, and in deep snow. Visitors may find late March to late November as the best period to travel on bicycles, if cold and snow don't arrive or persist.

Nice Ride is a public bike sharing program that both locals and visitors can rent from. It currently services both downtowns and limited areas between and outside the central business districts.

Minneapolis and Saint Paul both have extensive second floor skyways that connect central city buildings with each other.  That said, one could walk from the Convention Center in Minneapolis to Washington Avenue (a block before the Mississippi) without going outside, and without stopping at a pedestrian traffic light.

Even in good weather, mid-day romps in Minneapolis or Saint Paul at street level will miss most of the citizen activity, despite the appearance of crowds and farmers' markets, as many folks will choose to get their lattes, sandwiches, takeout, or copy keys, copy documents, or visit their banks, on the second level, a floor above the apparent activity.

As if to confuse you, there is an extensive network of tunnels connecting several buildings on the University of Minnesota's Twin Cities campus. Good idea, only different.

The Minneapolis-Saint Paul International Airport is the primary way to arrive in the Twin Cities via air travel.  The airport has two terminals, Terminal 1-Lindbergh and Terminal 2-Humphrey.  Most people will arrive via Terminal 1.  The Hiawatha light rail line serves both terminals and runs between downtown Minneapolis and Mall of America.

Amtrak is the primary way to arrive in the Twin Cities via train. Trains arrive at Midway Station in Saint Paul, located at 730 Transfer Road (one block north of University Avenue, near its intersection with Cleveland Avenue). The 16 bus line comes within a block. Daily service is via the Empire Builder trains, terminating at Chicago and Seattle or Portland.

Greyhound Bus Lines and Jefferson Lines buses arrive at the Hawthorne Transportation Center, located at 950 Hawthorne Ave (at 10th St, one block west of Hennepin) in downtown Minneapolis. It's just a few minute's taxi ride away from most of the downtown hotels. It's 4-5 blocks away from a few major bus routes and the light rail. The depot is near a homeless shelter, so it's not uncommon to see a few homeless people hanging out nearby. The area is well-patrolled and quite safe. Some routes make additional stops.  Bus transportation options:


This information was adapted from Wikitravel - Twin Cities under the Creative Commons Attribution-ShareAlike 3.0 license.