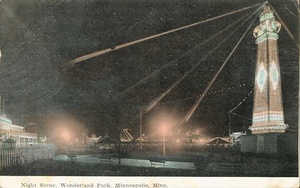 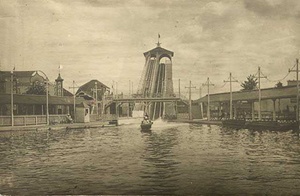 The popular Shoot the Chutes ride, 1904. Boats would shoot down the ramp into the lagoon below. Photo MNopedia.Wonderland Amusement Park was an amusement park in Minneapolis that opened on May 27, 1905 and remained open for only seven seasons. Wonderland was located on twenty acres of land at Lake Street and 31st Avenue in Minneapolis. The amusement park featured a roller coaster, fun house, shoot-the-chutes, miniature railroads for kids, a 120-foot lighted tower, a petting zoo, and a display of premature babies in incubators.

The focal point of the park was a 120-foot lighted Beacon Tower that people could climb. According to contemporary reports, the tower was lighted by more than five thousand bulbs, which was a tremendous extravagance at the time. It was reputed to be visible from miles away.

The park finally closed after the 1911 season due to back-to-back cold summers, extensive repair needs, and development around the park.  In 1912 real estate developers tore down the park, many of the rides were rebuilt as a part Excelsior Amusement park, which opened in 1925. The only part of Wonderland left is the former Infantorium, which is still an apartment building in the Longfellow Neighborhood. 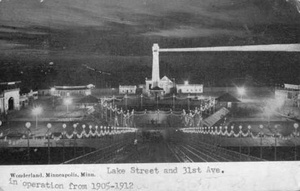 Wonderland at night. Note the 120-foot electric tower at the center of the postcard. Photo MNopedia.Learn more about the Wonderland Amusement Park at MNopedia.