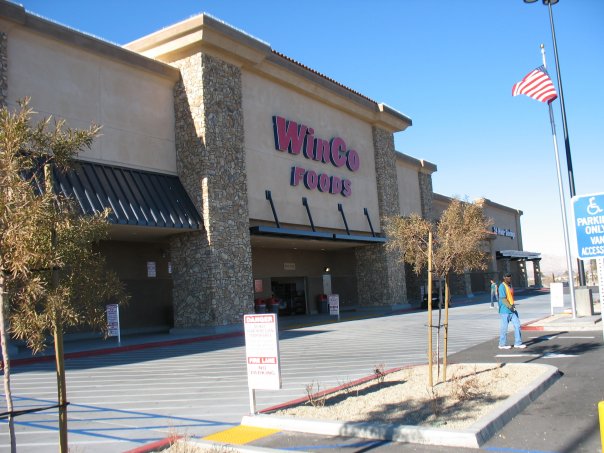 WinCo is a warehouse grocery store near the Costco in Vacaville (exit at Davis St. and turn right). Before 1999, WinCo used to be called Waremart. Its most notable qualities are well-priced baked goods and a sizeable bulk food section. The latter includes:

WinCo is a warehouse type store and customers have to bag their own groceries. There are no employees to help you with your groceries. They do not employ grocery baggers and the store is run by as few employees as possible. This reduction in labor supposedly is how the company can offer such low prices on food.

The company is approximately 90% owned by past and present employees, who are granted or buy shares through the employee stock ownership plan.

WinCo has been criticized by local United Food and Commercial Workers Union, which an ongoing boycott of WinCo. "Our ongoing boycott of WinCo has received support from residents all over the area. Once they understand the negative business practices used by this company, they applaud our efforts to rid them from our communities," said Jacques Loveall, Director of Organizing for UFCW 588.

Others have noted that Winco's wages are industry competitive, and the employee stock ownership program is a benefit that other grocery store employee do not receive.

2009-09-12 16:15:05   The store in our town (vacaville, ca) is always clean and the lines are, for the most part, pretty short! I've talked to the employees there and they always say how thankful they are to have enough hours to make good money instead of being cut to 2-3 days a week like some other grocery stores have had to do to their employees. And the prices they have there are unreal!! If you usually spend $200 on groceries, at Winco you will spend $120! With the economy like it is, Winco is a God-send!! Do yourself a favor and go check it out! —76.103.64.80

2010-07-08 10:50:15   I never had any problems with long lines shopping at this place (You want long lines? Try Safeway in South Davis in the evenings). Nor have i ever seen this place dirtier than others. Although it does get messy late at night when the night crew starts restocking shelves: pallets and box stacks everywhere. The place is a damn good deal for a great many things. —76.105.6.196 hm

2011-07-08 02:11:46   Winco is a scam. Dont believe all the Hype about Winco having the lowest prices because it doesnt. Me and my family did several shopping comparisons and found out that both Kroger and Smith Supermarket was less costly that Winco. Dont believe the Winco Hype. Winco is actually more expensive than many other Supermarkers. —174.52.196.237

2011-09-19 16:01:55   Im glad its non-union, it allows them to offer great prices. Whenever I go into a unionized grocery store I am amazed at how much things cost. I dont know anyone who works there but I like the concept of "employee owned".As far as food quality, price, cleanliness, inventory, I am completely satisfied. The only part of Winco I dont like is that it sometimes has long lines at the checkstand from all the other shoppers recognizing a bargain as well. —76.246.49.40

2012-04-27 11:00:35   Yes people might get better deals on food and save a buck, but the employee that's non-union gets fired for any reason winco choses, and a check that does not pay for their family need's every two week's. Wow but just think, u bought a loaf of bread for .69¢,stop being selfish and look at the bigger picture, your loved one could be the employee. Without good paying jobs their is no economy, but people will still by that bread, it's all, and only about them and what great deal they got.....sad I think. —174.255.189.178

2013-04-23 23:18:01   Wow, even though it's been a year since someone commented I hope they receive this in an email. WinCo is an amazing place to work. Any union supporter will try to spread lies about how non-union stores will "fire you for any reason" blah, blah, blah. Truth is, there are state and federal laws that protect employees of non-union stores just as much as union. The difference is we don't have to pay an insane amount of money for a union rep that will keep even the most inept employee in a job when they don't deserve it. Just to let you know, I always made higher than my counterpart at Safeway or any other union stores. Our contracts at WinCo are based off Costco's union contract (the highest in the western states we operate in... fact). I made more money as a department head than an assistant store manager made working at one of Safeway's "A" stores, or whatever their highest tier is called. Hey guess what? My ESOP (Employee stock) is 100% free, and I'm rewarded for hard work and dedication, rather than almost solely on seniority. Have a great day! —24.119.77.2

2013-05-26 09:59:36   The reason. U have LABOR LAWS IS BECAUSE when unions were strong they fought and won those federal laws . Before unions ther was no such thing as pension plans, overtime, job safety, healthcare, and the weaker the unions get, u notice u slowly lose those benefits. When unions wer strong you had healthcare. When unions are obliterated, u go down with the ship as well. A prevailing wage law is because unions fought for it, wake up middle class before we ALLgo down together. Stockbrokers and bankers have stolen more money than unions have ever had. When was the last union leader that made as much as billionaire CEO's? —71.37.143.239

2013-08-11 00:54:20   WinCo is great, and the employees are treated right. We shop there regularly, employees are friendly and helpful, the stores are clean and well-kept. We know 2 employees who are happy working there. Maybe if unions behaved like unions should, instead of acting like mafioso, more companies would embrace them. —71.237.171.143

2013-08-11 01:09:22   This article is so uninformed, biased and just plain idiotic "WinCo is a warehouse type store and customers have to bag their own groceries. There are no employees to help you with your groceries. They do not employ grocery baggers and the store is run by as few employees as possible. This reduction in labor supposedly is how the company can offer such low prices on food." THAT IS SUCH A CROK OF GARBAGE. I've been shopping at WinCO every week for years. It's not at all understaffed. You bag your own to save money on hiring baggers and it allows the cashier to do her job which makes the check-out process relatively quicker than at Albetson's or Safeway! UNIONS BRAINWASH people into thinking theyre a necessity, Unions use fear tactics and warpped information. Unions are CORRUPT. The idea, the spirit of Unionization was a good thing and early on accomplished countless advancements for the American worker. But unions have gotten out of control and corrupt by their own power. Listen to this BS: "Our ongoing boycott of WinCo has received support from residents all over the area. Once they understand the negative business practices used by this company, they applaud our efforts to rid them from our communities," said Jacques Loveall, Director of Organizing for UFCW 588." What a psychopath wanting to "rid (WinCo) from our community"...and kill how many people's jobs? GOOD PAYING JOBS WITH BENEFITS. And why? Because WinCo refuses to bow down and kiss the union's lazy fat a55. —71.237.171.143

2013-08-13 07:08:41   You can't really compare the organizational structure of Winco to a place like Walmart. Employees essentially own the store, they also take part in the decision making of the store as well. I'm pro union, and essentially this store is a gigantic union. I think the anti-union label is simply a turf war of the UFCW 588, which isn't a bad organization. —70.39.176.76

2013-08-25 12:20:58   Workers GET a fair wage and benefits. At this point considering how fair and good Winco is, a union could only cause further damages. Further, there are plenty of stores that do not have baggers. If you want to be lazy and pay more to have someone carelessly place your purchased food into a bag, go to another big-box grocery store. As for the remark about credit cards: why do you need to have credit cards to buy groceries? It is not an efficient way to purchase things and does cost customers an additional amount more — those costs add up. —216.98.255.25

2014-05-24 UFCW and worker-owners need to stop fighting.  The labor laws that protect people were won by unions, through political activity.  The UFCW is why a lot of grocery store jobs at Winco and Trader Joes pay so well compared to similar jobs at Wal Mart and Target.  Winco (and other worker-owners at other companies) needs to form a kind of union, a political action union, to help preserve those laws through lobbying and even by contributing to union PACs.  There's a mutual threat, and it's called Wal Mart and all the stores that pay their workers $9 an hour on average, don't have great bennies, and compete on price.

The situation at the union stores is different, and that's the main reason why the prices at these operations are higher.  You already saw it in the comments - the labor costs at Winco and the union stores are around the same, at least per person.  Why are the prices higher at the union stores?  It's probably related to the fact that they need to generate more profits for shareholders, and their strategy is to retain a specific type of customer - the kind who isn't shopping by price and wants a lot of customer service.  That means hiring more people, and selling things at a generally higher price.  It doesn't have much to do with union versus non-union.

Also, there is a union-organized discounter called Food 4 Less that's owned by Kroger.  So it's not like union shops can't deliver low prices.  They can - but the entire model is different.  The discounters sell to families and working class people.  The more expensive supermarkets are trying to sell more to people who are richer and thinner, have fewer kids, and really don't buy as much food for a whole bunch of reasons (like they eat at restaurants more).

Blaming the union for high prices is not fair or realistic.  Yes, union contracts will increase prices - but there's no way they increase prices by double or triple, like they are at some of these stores, because the wage differences aren't 2 or 3 times.  I've heard people talking about up to around 50% more, but that's it.  It also ingores the fact that labor costs are only a fraction of the cost of doing business: there are costs of buying inventory, losses to shoplifting and expiration dates, high salaries for managers, taxes, leases on space, and profit margins to stockholders.