What is Mount Lemmon?

Located in the Santa Catalina Mountains of northern Tucson, this desert getaway is some of the most spectacular mountain views. As it's the tallest peak in the Santa Catalina Sky Island, it's unique in its own way. In the winter, the skiing is an attraction for many as well as the dining and quaint shopping areas bring in visitors. In summer, it is a destination spot for rock climbers of all skill level, hikers, campers, and backcountry backpackers. The history of Mt. Lemmon is very interesting and should be known if you're a resident of Tucson - or even Arizona.

This land possesses some of the most interesting stories. As it was once home to paleo- Indians approximately 4,000 years ago, to catering to Hohokam culture and finally housing the Spaniards during 1542 Coronado Expedition. These peaks have seen so much more than any landmark in Southern Arizona. The name of Mount Lemmon comes from Sara Plummer Lemmon, who climbed Mt. Lemmon in 1881 with her husband. During the early 1900's, Mount Lemmon was solely known for copper mining and some people even found gold in the Santa Catalina Mountains. By the 1920's, a road was built up to Mt. Lemmon for people to visit the attraction. The most important attraction, second to the skiing, is the Mount Lemmon Observatory first developed in the mid 1950s. It was an Air Force Station, radar installation put into motion by the Air Defense Command. Many people travel up North to visit the observatory while others make their way up to Northern Tucson to ski. It's been reported that the Mount Lemmon Ski Valley, most southern ski valley in the U.S., receives up to 200 inches of snow every year. The ski lift runs year round, even during the summer, so that visitors can see the beauty that Mount Lemmon has to offer. Summerhaven, the community in Mount Lemmon, is where all the products are made that are sold in the Mount Lemmon area. Food and supplies are consistently brought up from the city of Tucson to resupply the residents of the mountain. The subdivision has been around since the 1920s and the lots that are offered here now are smaller - ranging from 5,000 to 6,500 square feet. Many snowbirds (people who travel South for the winters) live here due to the temperature that ranges from 30 to 50 degrees during the coldest months. So, if you're looking for somewhere to live in the Mount Lemmon area, Summerhaven is your spot!

As I am a student at the University of Arizona, I thought it was important to explore Tucson in order to get a better understanding of where I would be living for the next four years. It was the end of my first semester of my sophomore year and my classes had been cancelled on a random Friday. My roommate and I decided to take a road trip to see exactly what was up in the mountains we could see from our apartment on the South side of Tucson. It took us approximately an hour and 15 minutes to travel up to Mt. Lemmon with all normal traffic. It had been snowing in the Santa Catalina Mountains and we weren't sure if seeing it was even in the cards. Surely enough, snow and all, we ended up making it. We stopped and had some hot chocolate at a cabin cafe in the main center of the small town there. We shopped and took pictures, see below, we were so excited because living in Phoenix your whole life doesn't include snowfall. Both of us are inexperienced skiers, so that wasn't in the cards for us but we enjoyed watching everyone get excited for the first snowfall of the year, gathering all their gear. The drive was meant for a bigger car with tires that can handle it, I wouldn't recommend a smaller compact car. The road is a little steep and it's a winding road- so hopefully if you decide to go, you're not afraid of heights! Speaking of heights, I think it might have been the prettiest, most breathtaking views I have seen in Arizona. Yes, I've been on the Northern Rim up towards Prescott and it really doesn't compare. The mountains give this area of Arizona so much beauty. I am blessed to live in Tucson and be so close to something so beautiful!

The Ecology of Mount Lemmon

Mount Lemmon is an incredibly diverse location situated in the heart of the Sonoran Desert. At the base of the mountain, visitors can enjoy classic desert landscape. The ecology of the Sonoran Desert includes more than 60 species of mammals and 350 species of birds, many of which can be found on or around Mount Lemmon. One of the most iconic things in the desert is the Saguaro Cactus. As you first approach the mountain, you are surrounded by a sprawling landscape filled with desert rocks and cacti. As you soon find out however, the landscape drastically changes as you climb in elevation. One of the many claims to fame of the mountain is its un-Arizonian landscape that is hard to find anywhere else in the state. While you are in the Tucson area, you will only ever experience one ecological zone. If you choose to make the 25 mile drive up to the top of Mount Lemmon, that number increases to 5. There are 5 separate ecological zones on Mount Lemmon that you go through over the course of about 25 miles and about 8000 feet. The first ecological zone that you start in at the base of the mountain is the lower Sonoran zone. If an out-of-towner were to describe the Arizona desert, this would most likely fit their description. From 2000-4000 feet is where you can find the classic Arizona desert shrubbery and desert grassland. Once you continue up the Catalina Highway, the next ecological zone you will encounter is the Upper Sonoran zone. From 4000- 6000 feet, you see the area around you begin to change. Here you will find sparse Oak Woodlands and plenty of chaparral. It will begin to appear clear that you are not in the city of Tucson anymore. The next ecological zone you will enter is between 6000 and 8000 feet in elevation. This is known as the transition zone. For many people, this is the first time they have seen pine trees in the desert. The area here is overrun by a dense Ponderosa Pine forest. People often began to wonder if they magically landed in a different state when they reach this zone. The next and last ecological zone that you will experience on Mount Lemmon is between 8000 and 10,000 feet. This is called the Canadian zone. This area of the mountain closely represents many areas of Canada, hence the name, yet we are only a few hours from Mexico. Here you will find a dense Fir Forest. Filled with potentially 5-star Christmas trees. Up here is where you will find the Mount Lemmon Ski Valley. Many people who live in Southern Arizona are unaware that they have quality skiing so close to home. The Mount Lemmon Ski Valley, situated in the Canadian Ecological zone, is home to the southern most ski resort in the United States. There can be days in the winter where it is 70 degrees in Tucson, and in a matter of 1 hour, you can be skiing or snowboarding down a mountain covered in snow.

Here is a video I created of a trip up to Mount Lemmon: 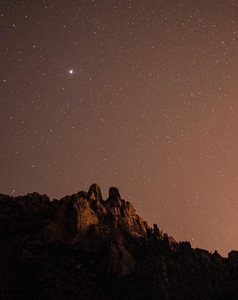 This is an image I took of the stars on Mount Lemmon with the Tucson city glow illuminating the sky.

Panoramic view shot on an iPhone 6 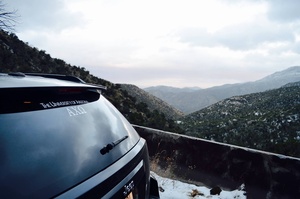 View from a lower peak