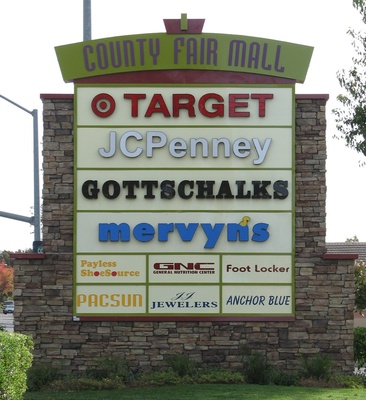 County Fair Mall is a mall in Woodland. Yolobus lines 42 and 242 will take you right there.

A few of the major businesses:

There is also a new Arcade called Timeout, and another named Dk's Place.

A new General Manager was hired in May 2008 and the mall is currently under going many upgrades and opening new stores. The Daily Democrat reported that tenancy has increased to 85 percent, up from 55 percent in 2005. In December 2005, the mall was purchased by Encino-based County Fair Fashion Mall LLC for $15.1 million. It was previously owned by Santa Ana-based Triple Net Properties LLC. (Source: Sac Bee 12/15/2005). At many times this mall has been referred to as the Dirt Mall amongst local youth.

A brand new Food Court is under construction and is scheduled to open October 1, 2008. A variety of smaller businesses including an East Coast-based cafe, a candy store, and an "authentic Mexican restaurant" from San Francisco will be opening in late 2008.

The Target at this shopping center closed and moved to the Woodland Gateway retail center in July of 2008. Burlington Coat Factory opened in Spring of 2009 inside of the former Targer building. Mervyn's filed for bankruptcy and closed in late 2008. Gottschalks filed for bankruptcy and was sold to liquidators and eventually closed. The Woodland Orange Julius was removed from the official website in Spring 2009.

Washington Mutual was bought by JPMorgan Chase and was rebranded to Chase Bank in March of 2009.

As of Fall, 2007, there is an alternative high school smack dab in the middle of the mall, courtesy of Einstein Education Center. It's funded, in part, by a grant from the Bill and Melinda Gates Foundation. "E2C served 150 students the first year (2007-2008), with a full capacity of 400 students at the end of the second year." There have been fundraisers and benefit events, such as Sacramento Kings player Mike Bibby coming to a meet and greet.

Also see a page about the Mall at Davis Wiki

The mall also used to host a Farmer's Market in their parking lot in the summer and fall - Tuesdays, 5PM-7PM and Saturdays, 9AM - 12PM. There's a story and some photos at the InsideWoodland web site. The Woodland Farmer's Market is now held at Freeman Park.